Mommy gets a break!

My favorite word for 2014 is moratorium.

It has been the oddest summer of all time.  The kids have been out of school for an entire month, and we still haven't been to the pool.  Between the knee injury/therapy, Turken playing baseball, Buttercup's unexpected trip to Kansas with her soccer team, and our trip to Europe, nothing is normal.  To make it even more "fun", we now have 2 kids in high school, trying out for the 2 soccer teams (one male, one female), each with a new coach.  Practices have been going on since the beginning of June, and they have to go to all of them in order to not repeat the disaster of last year's tryouts.  It means many trips to the high school each week, usually during dinner time.

In high school, there is a wonderful thing called "moratorium".  No high school teams are allowed to have practice of any kind during moratorium week.  This year, it just happens to fall the week after baseball is over and the one week I don't have therapy.  And because I managed to fit all 7 dentist appointments in before I left for Europe, we have an entire week without a single thing on the calendar.

Not one darn thing.

Basically, it's what the entire summer used to be.

That right there could be my entire list of 10 things, but what fun is that?

2.  We've had time to start attacking the jungle our yard has become.  No joke, there were weeds next to the house taller than Cuckoo.  Between the 6 and a half inches of rain this June, my absence from home, and Buttercup's mowing ability (She doesn't do edges, so around all trees, buildings, and fences are 2-foot wide areas of weeds the size of trees.) our yard looks like an abandoned property.  We began the process of rectifying that.  Once an area was cleared, we put some mulch down.  No planting occurred, but the mulch is there acting as a place holder for future planting.

3.  My surgery was rescheduled for next week, so I get to go to my dad's big 4th of July party in Ohio after all.  (FYI to any would-be burglars:  Bryan isn't going.  He's staying home to work.)  I don't think I could have survived another photo like this one my dad took last year when not one person came to his house for the 4th. 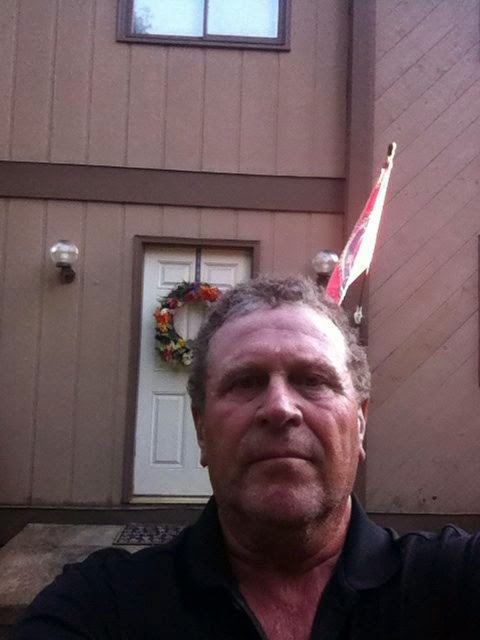 When he posted this on facebook with the message "Happy 4th of July" our entire family (about 50 people) got on the phone and decided the 10th of August was a great day to celebrate the 4th of July.

4.  The kids were able to have friends over.  With practices and appointments and just everything, my kids rarely get to have friends to spend the night.  On Tuesday, we had three extra kids here.  I loved it.

5.  With no practices, I've been able to make dinners.  We've eaten well every night this week.

6.  My friend who is temporarily (for three years) living in Japan is back for a visit, and I've been able to meet up with her three times already, twice of them just this week.  With a 13 hour time difference, we don't get to chat on the phone very often.  It's been so nice to catch up with her again.

7.  The weather has been perfectly lovely.  The beginning of the week was the usual hot and muggy, but the end of the week has been pleasantly cool.  Like high of 70 cool.  Very unusual for this time of year, but I'll take it!

8.  Mulberry season is upon us.  We have at least 15 mulberry trees on our property, and the fruit is starting to ripen.  We've been picking them daily.  Some we've given to the chickens right away, but most have been put into a frozen "pie" for a later this year.

9.  I used to be so good about printing photos and putting them in the kids' albums.  The last two years, not so much.  (Basically, when I really got into this blogging thing, I stopped.  So many photos are on the blog, I put it at the bottom of the priority list.)  However, my friend Jen had been on facebook warning everyone to back up their computers.  She has lost months worth of photos because she's had computers crash twice.  Between that and our internet service not working well for several days, I took the time to go through a bunch of them.  I deleted many and made a list of ones I want to print.  I even downloaded some onto the stores' site in preparation for printing.

Your turn!  What has put a smile on your face this week?

To my American readers, Happy 4th of July!  To everyone else, Happy normal weekend!

Either way, have a lovely day.