Thought I'd bore you with some farm and garden photos today.

(If that isn't a sentence that grabs you and makes you want to read further, I give up.)

I realized when the 5th person asked me how the pigs were doing (click here if you have no idea what was wrong in the first place.  It involves me giving three pigs shots in their necks. (Now THAT is a "gotta read further" sentence!)) that I never really told you how it all ended up.

The pigs are perfectly healthy.  Getting bigger by the minute, eating me out of house and home, and practically knocking me down and eating me every time I go in there.

Turken wanted to take some photos, so I gave the camera to him while I fed them. 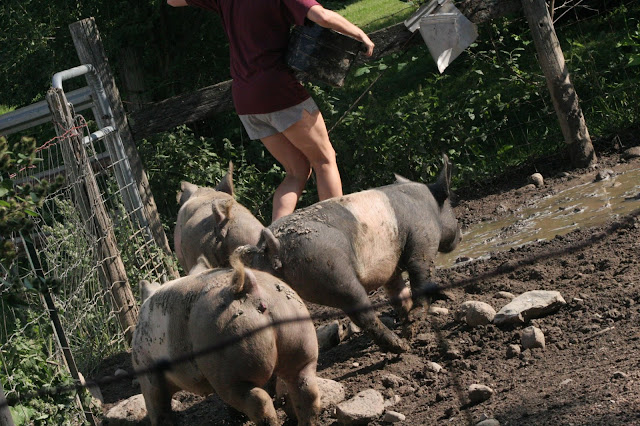 You can't tell, but I'm trying to run to their food bowls before they can get to me and knock me into the massive mud puddle (which we have not because it rained, but because COW turned the hose on to fill their waterer and forgot about it.)  I made it to the bowls, but not without being splashed.

When I returned to Turken, he had a grin on his face and said, "I took pictures of their bottoms." 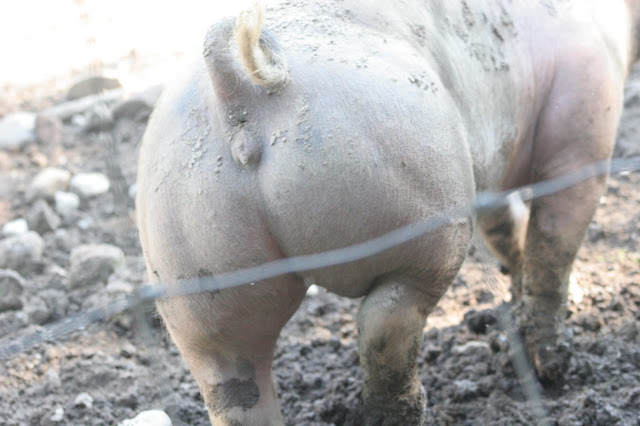 (Hope you weren't eating when that one was thrown at ya.)

Two days before vacation, I saw the green beans were ready to be harvested.  The kids and I went a-pickin, and brought in tons.  The next morning, we picked a ton more.  I got to canning right away, knowing they wouldn't last until we got back.  We had enough for 7 quarts and dinner that night.  Right before we left town, we picked some more and took them with us to eat all week.  I also left a note for the folks who watch the place while we're gone, telling them to pick green beans and take as many as they wanted.

When I got home, I was so sad.  There are still lots and lots of beans, but more than half of them are days past when they should have been picked.  Certainly no good for canning.  I will probably be able to get another 3 or 4 quarts out of what's left.

I hate for all the work of planting and caring to go to waste like that. 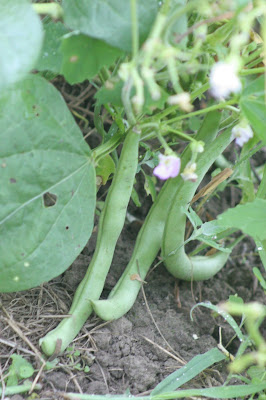 My only consolation is the beans didn't do so well this year, thanks to some naughty rabbits eating the plants.  We would have wasted a whole lot more if the plants were thriving.

Also, I will cook up those that are too big and save them in a frozen chicken treat for when the chicks get older.

Other plants were nice enough to wait until we got back home to mature.

We came home to a mess of problems.

On to the root veggies...


As I was out picking beans yesterday, in a row between the melons and the falling over tomatoes, I saw some leaves that didn't belong.  I then remembered that COW had planted some sweet potatoes this year.  We have about four plants (I can't tell exactly how many with all the overgrowth crowding them) that are doing smashingly well.  Can't wait to see how those potatoes look!
﻿

The moment you've all been waiting for and didn't even know it...

Chickens grow quickly, and ours are in their awkward teen phase. 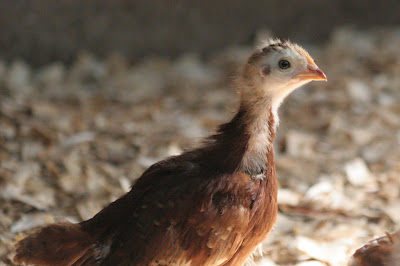 And as in high school, there are those annoying girls who are immune from the "awkward" of the teen phase.  The "Easter egg" chicks are the popular cheerleaders in this coop school.

﻿
We have one chick that I'm still worried about.  (The one with the crooked neck straightened out nicely.)


﻿
The 31 chicks outgrew their little area, so we have now opened the entire room for them to run around.

These buggers are so fast, and with the generous amount of room, the kids can't catch them anymore. It's fun to just sit and watch their antics, though.  It was especially fun to watch one who had caught a bug try to eat it without the others snatching it first.  The kids were in a fit of giggles every time she had to quickly pick the bug back up and take off around the coop with 5 chicks chasing her.  It took her about five minutes, but she finally got that bug down.  (It was a really big bug!)

Update:  After writing this, I went down to feed the chicks.  The sick one has gone to chick paradise, and no, I don't mean the backyard of Backyard Chicken Lady.

For those of you not on Facebook, we have new animals on the farm, who (smartly) do not depend on us for their well-being.  They live in our driveway's tree line and simply saunter from one side of the drive to the other.

Much to my brother's chagrin, and despite Lizzi's wonderful idea to catch her:

"Such a rookie hun - soak raisins in brandy and leave them in little paper cones with glue round the rims...bird tries to eat raisins, gets head stuck, gets drunk, wanders around blindly and you go and collect. Old poacher's trick AND you've made a start on the stuffing ;)"

this mama will not be on our table come Thanksgiving, and her babies will not be in our coop in order to feed us next year.  If she can survive (and help her babies survive) the coyotes and dogs which live all around us, she deserves to live.

Now, go see Jen and all her Quick Take friends.

Don't forget to come back for our Ten Things of Thankful this weekend!
at 12:12 AM

Email ThisBlogThis!Share to TwitterShare to FacebookShare to Pinterest
Labels: quick takes, the farm