Musings from the Minibus 4

Every one of these photos was taken by someone in my family.  None of them by the person actually driving at the time.  Photo-taking and driving is dangerous.  Don't do it.  Unless it's REALLY funny and you're in the car alone.*

1.  Nothing says, "Welcome to Wal-Mart" like a line of police cars outside the entrance.

There were three more in front of this.  I cannot even begin to tell you how nervous I was taking this photo, knowing there is a policeman actually in that car directly in front of us.  Thus, only 2 of the 5 police cars.  Yes, I'm a goody-two-shoes, policeman's daughter, also known as a wimp.  Thank you for asking. 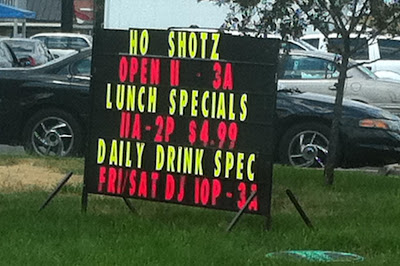 I shall let you write your own jokes on this one.  The ones in my head aren't fit for my children to read.

3.  Where I will be holding my next birthday party: 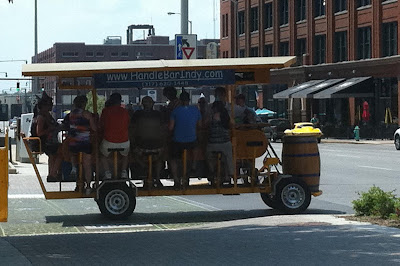 Why yes, that is a bar 13 people peddle all around downtown while they drink.  The thought of my friends doing this makes me laugh all day long.

4.  The most morbid sense of humor I've ever seen. 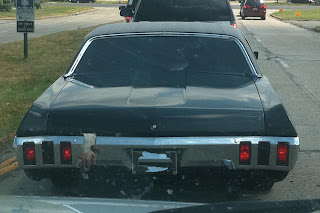 The arm dangling out of the trunk is disturbing, but once you realize it's fake, and you take it in with the old car, I find it quite amusing.  Unless it is a cover.  Could be there is actually a body in that trunk, and the arm is a decoy, so we all think it's funny.  Of course, the first old lady with a cell phone (whose eyesight is less than stellar) who sees this will call the cops on this guy, and the body will be discovered.  Mark my words.

5.  The company sign on the side door of this truck says, "Light Hauling" with the phone number. 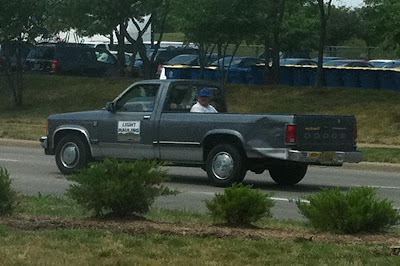 Place your bets:  a.)The disgruntled wife of the guy in the back called the company to haul his butt out of her house, or b.) it's a bounty hunter with the best name and vehicle ever, and the guy is being hauled to jail, or c.)  the guy in the truck was being responsible, but couldn't afford a taxi after his night of drinking, and he is being hauled home to sleep it off.

6.  Seen on the busy road I drive every day: 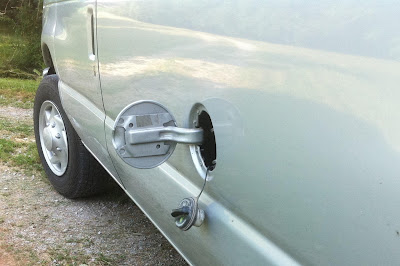 Does the doofus not hear a banging on the side of the vehicle?  Was the driver in that much of a hurry.

I'm just a moron who filled my car's tank before I filled the gas cans for the mower and forgot to close the cap.

On the way home, I hollered to the kids, "Does anyone else hear that banging?"  They did.  We looked, noted the situation, and continued to drive home.

What have you seen on the roads lately that struck you as interesting?

*No, really.  Never take a photo when you are driving.