It's been a good weekend.  Mostly.  Gotta give credit where credit is due.

(I've decided to not number my list today.  For some reason, I frequently misnumber my lists, and Dyanne catches them every single blasted time.  Dyanne's not going to get me today!

A.)  I am thankful for good music.  Lizzi put together a compilation of songs for me, since she felt bad that I only got to listen to kids' songs.  Listening to the songs while playing the longest game of UNO ever experienced by a group of humans (No, really.  The longest game ever.) made me actually want the game to go on longer.  Thank you, Lizzi!

B.)  I am thankful for hugs.  My niece and nephew (who are staying with us this week) love to give hugs.  I've been gathering them up all week.  Plus, when my kids see them doing it, they get a bit jealous, and hug me, too.  It's a virtual hugfest going around the coop.

C.)  I am thankful for parties with friends.  I spent a lovely evening at our good friends' summer get-together.  Sure, COW couldn't come with me for a large variety of reasons, but I wouldn't have seen him all night anyway.  I got to sit at a table and talk and laugh and enjoy the evening with a great group of ladies.

D.)  Once again, I am thankful for garden goodies.  I had forgotten that I was supposed to bring an appetizer to the party until late in the afternoon (far after I could have gone to the store).  I was able to throw together a quick cucumber/tomato/onion salad, and all the ingredients were out of my garden (except for the olive oil and red whine vinegar, of course).

E.)  I am thankful for my strong stomach.  When Cuckoo began spontaneously combusting from the mouth, all over the kitchen floor, cabinets, and dining room carpet, I managed to get it cleaned up without gagging one single time.  It happened as I was about to sit down and eat the biscuits and gravy breakfast I had just made.  As soon as it was all cleaned and Cuckoo was taken care of, I went and had my breakfast in relative peace (and by relative peace, I of course mean scarfed it down, surrounded by loud children who weren't actually demanding anything from me for a moment.)

F.)  I am thankful for the ease of texting.  I cannot even believe I'm typing this, but I am so thankful for it.  My boys are not big talkers, but by typing, they give me a whole lot more info and share more than they normally would.  It has been especially wonderful this week, with Phoenix being out in West Virginia.  It makes me happy to hear what he is up to and to be reassured that all is well with him.  Last night he texted me, "I just went to a show with the king of Sweden, Mike Rowe, and Three Doors Down."  No, he didn't actually sit with those people at a show.  Phoenix sat in the crowd to watch a concert, and the king and Mike Rowe came to say hi.

Also, as all mom's know, kids can sense when their mothers begin a phone conversation.  They choose those moments to fight, scream, poop in their pants and cause general mayhem.  The children have yet to perfect their texting radar, but even when they do, their tactics are not nearly as effective when the party with whom I am conversing can't hear them.

G.)  I am thankful for bodily functions.  Yes, it is crude and rude and immature and impolite, but my word, the giggles that come out of a little child after he "toots" and announces it to the world is absolutely precious.  (It kinda loses it's endearing qualities as the child gets older, but sometimes, yes, it's still funny.)

H.)  I am thankful for my brother.  He lets me have his kids every year for extended times, and he doesn't mind when I post pictures like this on Facebook. 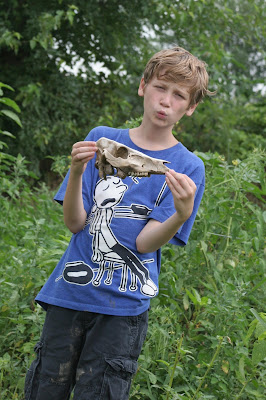 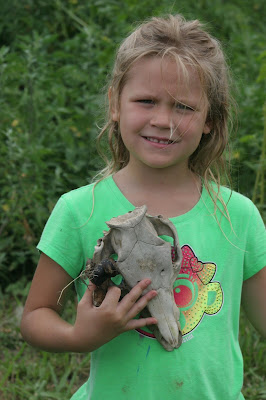 "We found it's bones!"
"It still has teeth, and they're wiggly!"
"It's like seeing what's inside a pig!"
"What part of the pig is this?"
"Can I put it in my special drawer?"  (Each little kid has a drawer in his dresser for the special toys/objects he doesn't want/have to share with other kids, thus the name "special drawer".)**

Not many parents would be cool with this type of behavior.  My brother is a cool dad who encourages such things.

I.)  I am thankful for my children's good sportsmanship.  Three of the four big kids played in a 3v3 soccer tournament this weekend.  In the first game of the day, for the first time in family history, Giant and Star were on teams which played against each other.  As COW said, "I feel like Archie Manning."

The boys took it so well, with very little trash talk.  And afterwards, when telling me about the game at dinner, they were both gracious about it.  They were able to see the good moves/plays of the other while still being happy with their own performance, despite the fact that one team trounced the other.

Hope you all are having a delightful weekend!

There's still time to link on up!

Your hosts
A Fly on our (Chicken Coop) Wall,Bringing the Sunshine, Considerings, Finding Ninee, I can say mama, Steps into Parenthood, Thankful Me, The Wakefield Doctrine