We are not fortunate enough to have a pool of our own.  My sister has a pool, but she lives in Kentucky and is of no help.  So, to beat the heat, we are relegated to the public pool.  If you've never been to a public pool, think Wal-Mart without the coverage pajama pants affords.

Stasha's Listicle topic this week is "summer".  I shall give you...

1.  Rude people who say rude things to complete strangers.  Cuckoo and I were having a lovely time playing in the big pool, he jumping in to me, when a young woman looked directly at me and said, "Are you the mom or the grandma?"   And it hurt, Man!*  (For those of you who heard about this on Saturday, I'm over it now.  I'll never mention it again.  I would have been over it sooner, but my dear husband won't stop laughing and telling everyone he sees about it.)

2.  Tattoos.  Going to the public pool is a lot like going to the Metropolitan Museum of Art.  Everywhere you turn, there's an artist's rendering of some object, event, or person.  In both places, you see original work depicting important events in a person's life.  Sure, in the museum, artists use mediums like pastels, paint, charcoal, and watercolor on everything from canvas to wood to metal, while at the pool, artists are limited to ink on skin, but that doesn't mean you can't appreciate a good image of Jesus at either place.  (No joke, I actually saw the face of Jesus taking up the entire calf of a woman at the pool. (Don't ask why it was on her calf.  I was too afraid didn't get a chance to ask her.)*******

3.  Lifeguards.  They ain't what they used to be.  First off, now they all have to train with The Hoff.  Red is the new mandatory swim suit color, and every one must carry the big, red floating devices.  They never sit for more than 15 minutes before they are up and walking to another station.  These folks are focused, which means they catch all sorts of children behaving in ways they shouldn't.  Every 11 seconds, another whistle tweets, and children freeze, wondering if it was they who did something wrong.  Of course, it wasn't.  The kids running/hanging on the lane line/diving/sliding down the slide head first/wearing unapproved flotation devices are having too much fun to hear the whistles blowing. 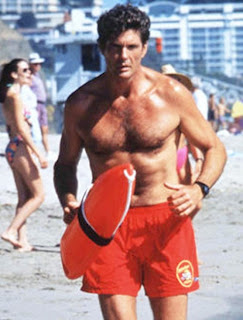 4.  Skin.  Lots and lots of skin.  Bathing suits have become smaller and smaller as people have become bigger and bigger.  I tell you what, I'd almost rather they all just go naked.  At least then I could look away instead of constantly watching and wondering just how long that itty, bitty string is going to hold in that great, big boob.

5.  Disgustingly wet floors in the bathroom.  Is it water?  Is it pee?  Does it matter?  It's all a nasty, cold, slippery germ locker that beckons to my child all day long.  I swear, Cuckoo goes to the bathroom maybe five times on a normal day.  At the pool, he must go at least five times in two hours.  I'm almost to the point of teaching him to put the P in the ool.  As I've heard many women who have used the facilities then failed to wash their hands say, "The chlorine will kill the germs."

6.  Teen boys doing cannonballs to impress the girls.  Nothing says, "You're cute," like a great, big, flood of water being thrown on you.  It usually works, as long as the boy comes up for air with the always adorable, only-the-young-can-do-it-without-throwing-his-back-out head toss.

8.  Piercings.  In every orifice, current or past, and in some places that have never been orifices to begin with.  Ears?  Of course.  Nose?  Yup.  Tongue?  Why not?  Belly button?  Oh, are there ever.  It must be the new thing.  Not only do females get their belly buttons pierced, they do them up!  Honestly, when we went to the pool last week, I saw no less than 10 chandeliers hanging off of people's midsections.  Oh, and the "never been an orifice"?  Yeah, a woman had two silver studs coming out of her lower back, about 3 inches above her bikini line.  "Why?" wasn't my first question.  My first thought was, "HOW???? Are they connected under the skin?  What's holding them in?  Are your kidneys OK with this?"  Baffling, I tell you.  Baffling.

9.  Water slides and high dives and dumping buckets of water.  Basically, everything your kid wants to do, but only if you do it with him.  Now, I've done all of these things, and I'm not afraid of no high dive.  However, I am afraid of catching my child who wants to go off.  Those couple of seconds before the child surfaces are horrifyingly long.  I'm not opposed to going down the ginormous water slide.  I am opposed to going down the slide while holding one of my children.  With the added weight, we tend to fly higher up the sides in the turns, which flips us all around and upside down, so I am a panicky mess trying to right us before we hit the water in a jumble while keeping said child's head above water.  I always walk away from that thing with bumps and bruises and scratches all over my body.  As for the buckets of water, I don't have to go under those.  I do, though, have to console the youngest boy when the bucket dumps on his head unexpectedly, and he flips out, slips, and lands on his head.

10.  Children with ill-fitting suits.   There is always that one kid who has the new suit.  The suit that fit in the store, but once in the water, falls down with every pop out of the water.  You see the poor kid struggle each time he surfaces to pull the suit back up over his crack.  And then one time he turns around, and you see his suit has gotten so low, it is thiiiiis close to showing everyone in the place all that God gave him.   Poor kid.  And his poor mom.  All she wanted was to get him the cool suit with the beloved character on it.  Sure, it didn't have a string to tie it tighter, but it seemed snug enough.  It fit in the store!!!  When the mom sees this suit malfunction, she has flashbacks to when her oldest child took swimming lessons at the same age as this child.   During the swim test, he had to do 10 bobs.  He was facing away from the parents and towards the instructors.  Each time he came up, the parents were shown his nice, bright, white tush.  From the looks and laughs of the instructors, they were getting to see plenty of jiggle on their side.  Did anyone stop him?  No.  He merrily went along, bob down, pop up, pull up the suit, bob down, pop up, pull up the suit...as the entire place rolled with laughter.   The mom quickly snaps back to the present and the suit issue unfolding before her.  She can't force her entire brood to go home simply because of this one child's bathing suit, so she does the next best thing.  She follows him around everywhere he goes, yanking his suit up each time he surfaces.

OK, maybe you won't see #10 unless you go to the public pool where I go.  That would be my kid.  And yes, the story of the boy taking swim lessons was Phoenix when he was 4 years old.  It seems we fit right in at the public pool after all.

*If you have never watched "Kid President", do so now.  This quote is from "A Pep Talk".

*******  Good grief.  I found out why the woman had it on her calf.  On a whim, I googled "tattoo of Jesus on calf" to see if I could find a picture of one.  Guess what came up?  Justin Flippin' Beiber.  He has a tattoo of Jesus on his calf.  Asked and answered.  And gag me with a tattoo needle.

Have a lovely day and a fun, relaxing summer!

Email ThisBlogThis!Share to TwitterShare to FacebookShare to Pinterest
Labels: Monday Listicles, my thoughts