One thing I learned from yesterday:  I have marvelously caring friends who get very twitchy when I'm sad.  The texts, phone calls, emails, and comments really helped my mood.  Thank you.  Still sad, but there is nothing I can do in any of the bad news situations except pray and go to a funeral.  So I will.

Now, back to our regularly scheduled program...

I suggest you listen to our new theme song while reading this post.

Throughout this entire pig ordeal, I have learned and done more things than I ever could have imagined.  If I were to write it all out, it would take me days to tell the whole story.  I'll just give you the highlights.

(If I knew how to make a button, this is where it would be.  And it would say "118* things I learned about vets, pigs, pig maladies, and what to do about them.")

1.  There is only one vet in our area that deals with swine.
2.  Swine is the official term for pigs.
3.  Vets will not do fecal tests on animals they have not seen before.
4.  It is best to figure this out before collecting, double-bagging, and driving fecal samples to the vet's office.
12.  A 75 pound dead pig is much easier to drag to the back field than a 200 pound pig.
13.  Children still find dead pigs fascinating.
14.  When you dispose of a 200 pound dead pig in the back field, the imprint in the field is still there a year later.
5.  Human's can get the same illness as a pig.
6.  When a person thinks she is dying from the same thing that killed her pig, she just might panic.
7.  And send out texts similar to this: 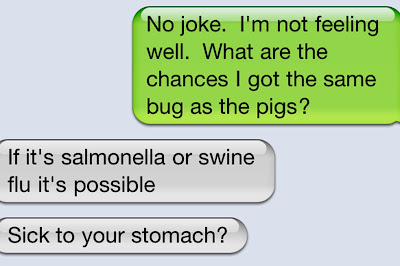 8.  And call her husband, mom, and sister-in-law to discuss the situation.
9.  When a person is dying, there is no such thing as TMI.
10.  People tend to laugh when told the pigs and their owner have the same "bathroom issues".
11.  It's still not funny.
15.  The one swine vet may not actually exist.  I have yet to hear from or see him.
16.  When a pig dies and a vet chooses not to come or even call, sister-in-law vet techs get anxious and suggest completely crazy things to try. 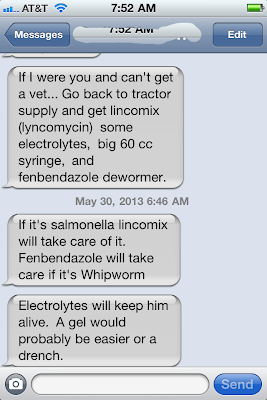 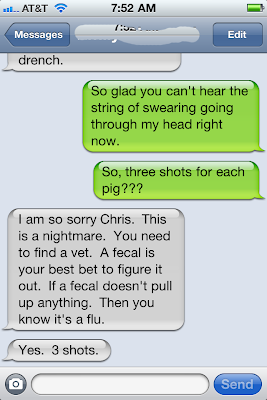 14.  I tend to ignore crazy ideas.
15.  Sister-in-law vet techs don't like to be ignored and will just show up at your door, even if they live 2 hours away.
16.  She will have a couple bags full of medicines, needles, and syringes.
17.  A rope is very handy when trying to catch an uncooperative pig.
18.  Sister-in-law and I need to take lasso lessons.
19.  When a pig is finally caught with a rope in the most difficult way possible, he will squeal, kick, bite, spin around, run, and put up quite a fuss.
20.  Sister-in-law vet techs are strong!
21.  And just as stubborn as a pig.
22.  It is important to be quick when injecting an uncooperative pig.
22.  I am a rock star when it comes to giving a pig multiple injections.
23.  No, sister-in-law wasn't just saying that.
24.  A pig should only receive 5ml of lincomix in one injection site, even if he needs 10ml.  You need to stick him twice.
25.  If you only want to give a pig 5ml of meds at a time, don't put 10 in the syringe.
26.  A pig who has been given 10 ml of lincomix in one shot will live, but he will have one heck of a painful bump at the injection site.
27.  If your pig has diarrhea, it's a good sign, as that can be fixed.
28.  If a human has diarrhea, it's not good in any way, shape, or form.
29.  Catching and injecting meds into pigs is a great way to bond with your sister-in-law.
30.  You may even end up with your own secret-meaning handshake.
31.  And promises to always call the other when a farm animal is sick and in need of a shot.
31.  When a pig has diarrhea, electrolytes are very helpful in warding off dehydration.
32.  Electrolytes taste nasty.
33.  So I've been told.
33.  Add sugar to the electrolyte/water mix and the pigs will drink every drop.
34.  I just might become a real farmer after all.
35.  Once I actually get through this little bout of assumed salmonella.

*I have no idea how many things I learned.  I got tired of going back and changing the numbers each time I thought to add a point or rearrange the order.  Thus the completely wacky numbering we have going on.

Because of the number of needles being thrown around, the amount of mud in the pen after 5 hours of rain, and the incredible tantrums thrown by the pigs, I didn't let any kids in to take photos.  You're going to have to live with drawings. 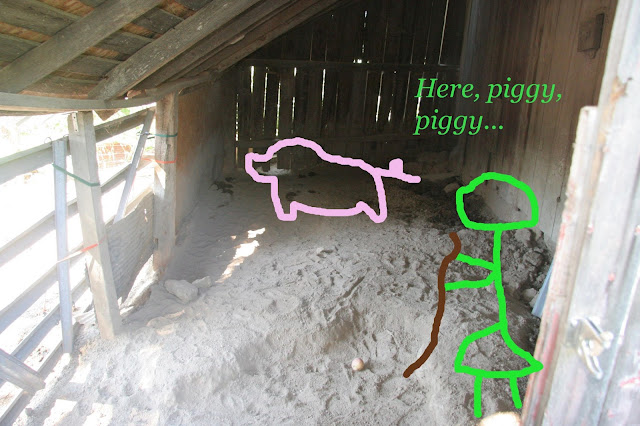 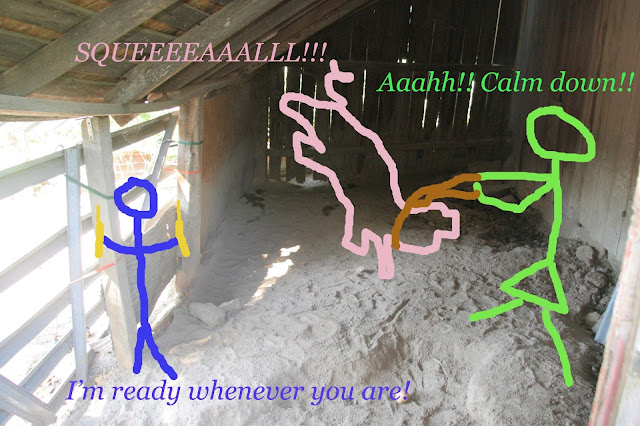 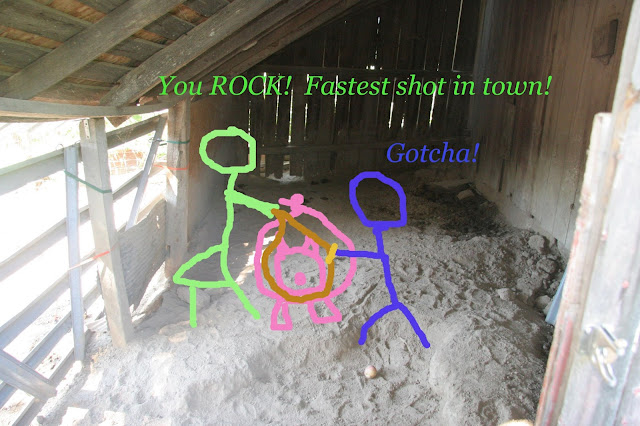 This morning, the three pigs are still alive.

It's been raining for hours and hours, so the pen is just a pit of deep mud.  The pigs have the small barn area to stay dry, so I can't get a good read on how active they are.