Each week, Josie chooses two words as writing prompts.  We are to write something original (not just link up a past post) with one of the two words as the theme.  I have never done one, seeing as how my brain just couldn't come up with anything before.  This week, though...  This week, I'm in!


Your choice of word prompts for Tuesday, June 25th are:
big  or  waiting

I hope you'll join us!
********************
Nineteen years ago today, Hubby and I stood in front God and a church full of friends and family to receive the Sacrament of Holy Matrimony.  It was a big day only in that it was the first day.  It was the first time we committed ourselves to sharing our life and love.  We have made this same promise every single day, whether it be out loud or in our actions.  To us, marriage is not simply "a piece of paper" but a sacred union.  It cannot be broken.  Most days, it is easy to make this promise.  On those days in which we are just plain annoyed with each other, it's harder, but it is even more important to do so.  Knowing that this is a sacred union, we are much more motivated to communicate better and clear up the disputes to bring us back around to the easy days.
But today, as we humans are known to do, we will celebrate the first day.  The BIG day when we first committed ourselves to each other.
For me, the wedding day was not what one would consider a normal wedding day.  For much of it, I wasn't surrounded by throngs of people.  I went and had my hair done, headed to my grandma's to get a shower, then to my dad's to get dressed.  I dressed alone.  I waited for the photographer alone (except for the moments I had to talk my little sister into actually wearing her flower girl dress).  It was a peaceful morning of preparation and anticipation.

Once everyone started arriving, things got hopping.  We had a few photos taken at the house, then on to the church.  We were married in a beautiful, old church where Hubby had gone to elementary school.  He grew up in a town that, years and years before, had been part of my family's farm.  Many of the streets have my family's names, and I'm related to half the people there.  We thought it was a wonderful place to wed.
It was a beautiful Mass, and we smiled the entire way through.  We were completely relaxed and simply enjoyed ourselves.  I asked my mom to accompany my dad and me down the aisle, seeing as how they had been divorced a good long time, and he wasn't really representing the both of them.  She was hesitant at first, but finally agreed.  We're both glad she did. My brothers and his sister did the readings, cousins were the servers, aunts were the Eucharistic Ministers.  His grandparents brought up the gifts. (My grandparents were there, but my grandpa wasn't able to do it.) 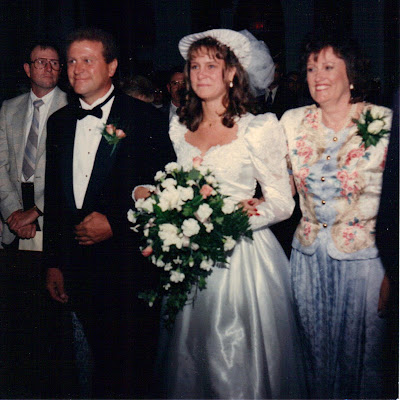 We all had a good laugh when, during the vows, Hubby flubbed my name.  He has some explanation, which he thinks is reasonable, but as far as I'm concerned, after 7 years of dating, he really should have had that part down pat. 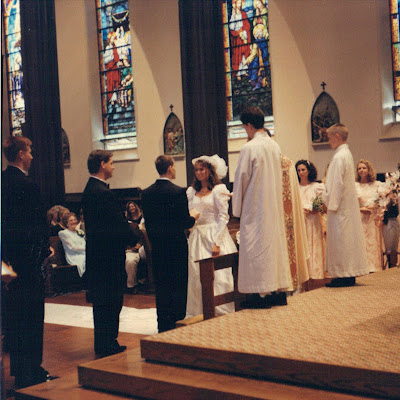 Before the ceremony my youngest sister (about 7 at the time, and quite a corker) issued me a dare.  At the moment the priest said, "You may kiss the bride," she wanted me to look at Hubby and say, "I'd rather kiss a goat".  When the moment came, I could feel the giggle waiting, knew she was anxiously waiting for me to speak.  Hubby and I both smiled, knowing I wanted to say it out loud, but I couldn't do it.  We simply kissed, and everyone cheered.  Both Hubby and I have said it plenty of times since then, though, and each time it reminds us of that wonderful day.
The reception was in a converted barn at a local golf course.  Nothing fancy, to say the least.  It didn't matter.  We had a blast, dancing and visiting and laughing all night long.

There was the usual cutting of the cake, 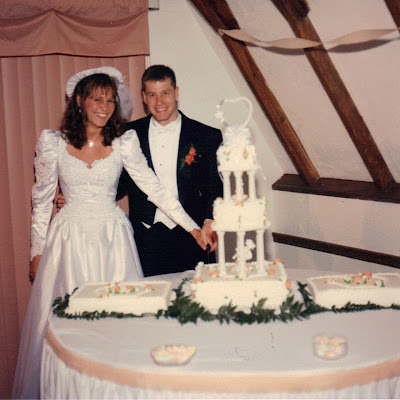 (yes, he did smash it in my face, but I got him better than he got me) 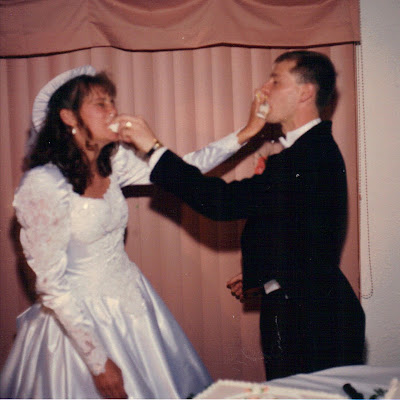 and the first dance (to this):


After the reception was over (we were close to the last to leave) we headed to our hotel.  All of the out-of-town guests were already in their rooms by the time we got there.  We made it to the front desk to check in, but were told they gave our room away.  Since we hadn't checked in before 6:00, they thought we weren't going to need it.

Yes, there we were, bride and groom, with no room at the inn.  They apologized profusely, and immediately started calling around town to find a room for us.  Unfortunately, there was some convention or something going on, and no hotel rooms were to be found.  Finally, they found a room (notice I didn't say "hotel") for us at no charge.  We were directed about 5 minutes down the road to...

Kid you not.  That is where we spent our first night as husband and wife.  We had to walk through a dark, dingy bar sparsely filled with old, lonely men (silent at 1:30am on a Saturday night) to get to our room on the second floor.

Can you think of anything more romantic?

We had a flight to Miami at 8:00 or so the next morning, and without cell phones, we had no way to wake up in the morning.  (Surprisingly, Don Poncho's didn't have wake-up calls.)  We had one of our parents call us at 5:30 to wake us.

The next morning we made it to his mom's house, packed up our luggage, and headed to the airport.  It wasn't until we were checking in at the airline that I realized I had left my purse back at my mother-in-law's house.  I had no ID, and half our money was in it.  (Remember those promises we made?  We got to practice living them right away!)

Fortunately, this occurred back in the day when people simply trusted each other.  I managed to fly to Florida, drive a rental car, go to places for folks 21 or over, and fly home without an ID.  No one batted an eye when I said I forgot it.

Nineteen years ago, on that big day, we never, ever could have imagined all that we'd do and go through.  No married couples can.  That's why marriage is so hard, and the promises so important.  Without having any idea what is going to be thrown at us, we have promised to do it together.   It is overwhelmingly reassuring to know that we both believe this with our entire beings.

For better (Bermuda) or worse (law school) in sickness (his, kids', mine, or swine) and health (six kids!) for richer (Bermuda) for poorer (once again, law school), we're doing it together.

Now, go on over to Josie's Two Shoes to read some other takes on the theme or to link up your own!