Another One Bites the Dust

This post is in memory of a fluffy-headed chicken that has passed on to safer pastures today. 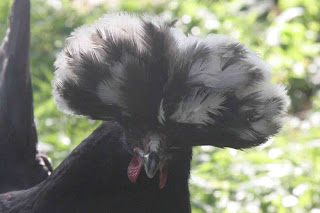 Today, we're going to talk chicken.  As I've mentioned, chickens came with our house when we bought it.  The first time we set eyes on a real live chicken was the day we took our first look at the house.  We have learned a lot about chickens since then, usually the hard way.  For all you city folk reading this blog, learn.  For the one or two country folk visiting, feel free to shake your head and mutter. 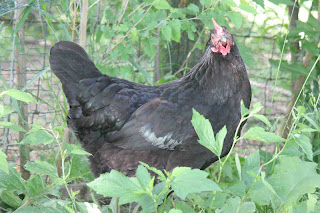 2.  A farmer doesn't need to have a rooster to have eggs.  Hens will always lay eggs.  However, in order to get chicks in those eggs, a rooster must be present.  Don't worry, you're not the only one wondering how that chick gets into that egg.  Some people are embarrassed to ask the question, but everyone is thinking it.  So I'll show you.  I happened to be taking pictures of the chickens when the rooster "had to have some needs met."  No hens were harmed, and the act only lasts for roughly  5 seconds.  Cover your children's eyes now. 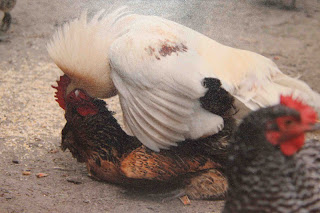 As long as you collect the eggs every day, you'll never know which eggs were fertilized.  However, if you let the kids be in charge of collecting eggs, you may not know that a chicken has been sitting in a certain nest when the kids collect eggs, so some eggs weren't collected.  But then one day a couple weeks later, that hen happens to be getting a drink when the kids are out there, so the kids get the eggs.  You finally learn these things when you go to make an omelet, crack the egg, and a dead chick lands in the bowl.

3.  The phrase "pecking order" really does refer to chickens.  There is a definite hierarchy in a flock of chickens.  Certain ones get to eat first.  They retire for the evening in a certain order.  If a chicken gets brave and tries to go out of line, she will quickly be put in her place with some well-placed pecks.  In our first year in the house, when we were completely new to this and chickens were dying almost daily, there was some serious chain of command confusion.  One day we found a chicken pecked to death.

4.  Day old chicks can be ordered from a catalogue and mailed.  After those first 14 chickens died, we decided that we would try again with a whole new flock.  We chose the breeds we wanted and put in the order.  A few weeks later, we got a call from the post office on a Sunday morning.  The faint sound of cheeping could be heard in the background.  We had two hours before the post office lady went home and our 25 chicks were locked in the office until Monday, where they would have likely died, because...

5.  Chicks need heat to survive, usually provided by a hanging heat lamp.  We got the chicks a couple of weeks before Easter, as I was a photographer at the time.  Our coop does not have electricity, so we just kept them in our basement.  We put them in an empty plastic baby pool walled with two foot high chicken wire.  All day long we could hear the cheeping through the vent in the family room.  They were adorable, but man, did they stink.  I cleaned out their bedding several times a day, and the stench could still be smelled throughout the house.

6.  Chickens can fly, and they fly early.  That two foot high chicken wire wall held those birds for all of two weeks.  They started hopping out, so we put them in a tall box.  A couple of weeks later, they were flying out.  (As I type this, I wonder why we didn't put a lid on the makeshift cage.)  With all of the photo shoots I was doing at the house that spring, lots of people were getting to see our chicken-filled basement.  Two families actually figured out that they went to the same photographer when they discussed the situation.  Between the stench and the flying, I was ready to kick the birds to the coop regardless of how cold it got at night.  I was sent over the edge when one of the kids ran up the stairs hollering, "There's a chicken in the playroom!"  The chicks were in the coop the next day.  (After that year, we never had Easter chick photos again.  We refused to order them before June, when they wouldn't need a heat lamp and could go straight to the coop.)

7.  However, roosters don't fly.  While the hens go out and find mulberries, compost ingredients, and garden goodies, the rooster waits all alone in the run, unable to fly over the fence or squeeze under the gate like his harem.  Which is unfortunate for the hens, because ... 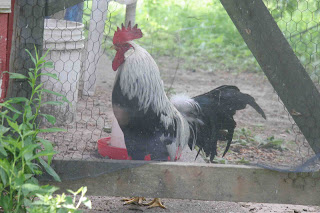 8.  A rooster has big ol' hooks on the backs of his legs.   He uses these talon things to do some serious damage to his victim.  He'll lean back on his tail and kick and scratch.  We've had a couple of testy roosters in the past, and one came after Buttercup.  It ripped through her jeans and gave her a nasty gash on her leg.  But, when chickens fly out of the run (#6) and the rooster can't (#7), those talons aren't doing anyone any good.  Which leads to the story of the fluffy-headed chicken death.  And the fact that...

9  Chickens are the dumbest animals on this entire planet.  Granted, it's not their fault.  Have you ever noticed just how tiny a chicken's head is? 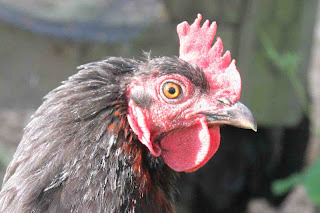 But honestly, when there is a 95 pound dog stalking you every single day, without even trying to hide it by the way, you'd think a chicken would take notice.  You'd think that those chickens would choose to go to the back field, where no dog can get to them.  Or at least, if they do venture onto the dogs' side, they would stay close to the fence for an easy getaway.

But, no.  They don't.  I have two theories as to why they continue to basically go right on up to the dogs.  One, they are like that Dory fish from Nemo.  Each day they have to relearn the boundaries.  One might watch her best friend get snatched up and taken away, but the very next day, in her best Dory voice, she'd go up to that dog and say, "Hi!  Have we met?  I'm out looking for some berries.  Would you happen to know where they are?"

Or, theory two, it's like me when I take an inner tube out into the lake, get lulled into closing my eyes, and, when I awake, realize that I'm half a mile from where I started.  Perhaps they are so into all the scratching and pecking, scratching and pecking, excited for each new bug they uncover, that at some point they look up and realize, just before the teeth come down on them, "Oh #*&@, I'm in the dogs' area!" 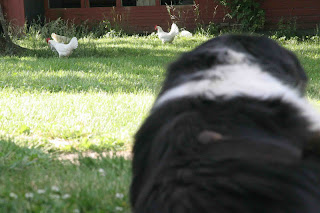 Either way, one dumb bird wandered too far into the yard.  We are down to 18 hens.  Winner, winner, Roy had some chicken dinner.

Have you noticed that I haven't told you a name for this chicken?  Since that first year, we don't name chickens.  See, we've learned.  If we make it through summer with a third of these chickens alive, we'll call it a successful year.   As much as we've learned, they have learned absolutely nothing.  There's a reason Pavlov used dogs!