We are an athletic family.  Between us, we have tried just about every sport out there.  Swimming, football, volleyball, ice skating, baseball, triathalons, skiing, soccer, basketball, and track all checked off of our list.  We are by no means good at all of them.  I beat a total of 3 people in the triathalon I did, and that is only because I managed to pass three men over the age of 70 in the run portion.  My 10 year old was the lightest person on the football team and was tossed to the ground every time he stepped foot on the field.  We have never had a child on anything but the C team in basketball.  Our goal is to have fun, learn something new, and try as many things as we can with the bodies and time that God gave us.

Of all of the sports, there is one that I love above all others for my children.  Why do I love cross country?

Partly, it is because any age can participate and feel included.  Our little ones ran at every practice, not because I told them to, but because the "big kids" made them feel special.  The coach even gave them their own uniforms.  When I had to break it to the three year old that for safety reasons he couldn't actually start with the team when they raced, he was quite perturbed.  He wailed, "If I don't start with them, I can't win!"
Here is the 2 year old sporting his uniform at the city meet this past weekend.  The white you see at his knees is the bottom of the shirt. 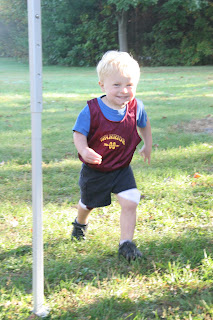 Perhaps I like this sport because I love the look of my boys' scrawniness in their tanks.  It was an unusually warm 85 degrees on Saturday, so the kids went for the least number of layers. 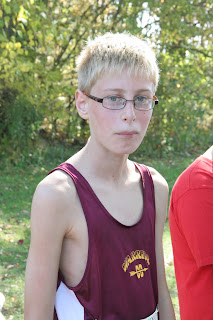 It may be because I get more excercise on meet days than the kids do.  I am not the kind of parent to stand at the start/finish line.  I ask my kids where the hardest parts of the courses are, and go there to cheer the team on, running around like a chicken to cheer each child in as many spots as possible.  At the city meet, each of my four children was in a different race, based on age and gender.  I think I logged about 10 miles when they each only ran 1.8. 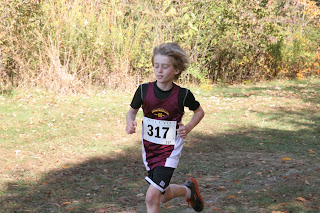 It is true that cross country meets beat all other sports by far in scenery.  My favorite courses have some woods to run through. 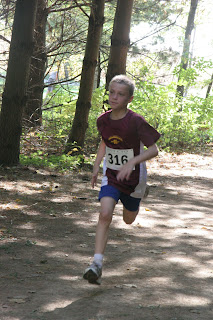 I most certainly love that fact that it is just a positive sport all around.  The courses are always lined with runners from all teams cheering on other racers.  I have seen kids competing against each other stop to check on a fellow racer who suddenly stops in pain.  And I have never seen a parent berate a competitor or a race marshall.  Since everyone runs the same distance, there are no rules except to follow the course, and  there is no physical contact between runners, there is no reason for parents to lose their cool.

But my biggest reason for my love affair with cross country is that all kids can succeed.  It doesn't matter how fast you are compared to other runners.  Even the child who comes in last place every single race can be successful.  I absolutely love the look on a runner's face when she realizes she beat her time from the previous week by 30 seconds.  I had a discussion with two fourth graders at the meet on Saturday.  Neither of them had ever run a yard in her life before joining the team.  The girls were so proud of the progress they had made. Both of them had walked at least a portion of the first race of the season.  Lots of kids did.  But as the season went on, they walked less, ran faster, and felt better about themselves.  And they had a blast doing it.
My little girl was one that saw huge drops in her time.  She used to think she wasn't a runner, since her brothers always ran so well.  She was pleased as punch to learn that she ran 2 minutes faster than her first race.  And at least 15 people told her how much stronger she looked doing it.  Granted, she doesn't look so strong here, but this was 400 yards from the finish.  She said she was trying not to throw up. 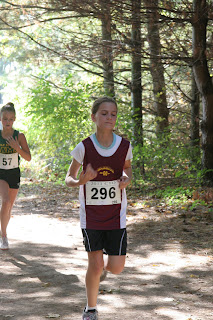