﻿In my time off from the computer, four of my boys turned another year older.   Our "rule" is that the birthday child has a choice to make.  The first option is to take one friend to something fun around town, then come back to our house for a sleepover.  Or he can have a bunch of kids over for a three hour party.  All three big boys chose parties.  The now two year old celebrated with the extended family over Labor Day. 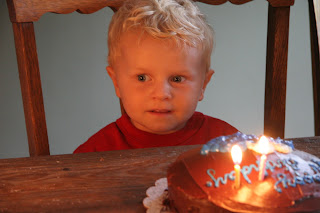 The now ten year old discovered his new favorite movie a few weeks before his birthday, so we had a Monty Python and the Holy Grail party.  Luckily all of the guests had seen the movie before, so no explanations were necessary.  Upon arrival, each boy was given a foam sword and two blocks to hit together, as cocunuts are hard to come by here in Indiana.  We then acted out favorite scenes from the movie.  I had the most fun watching the boys "ride" their horses from station to station.  This is a photo from the bridge scene.  My oldest was the black knight, who suffered "merely flesh wounds". 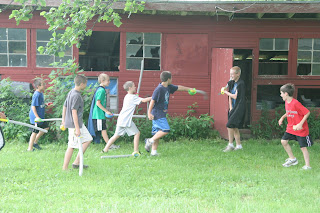 My oldest turned into a full-fledged teenager this year, so we let him have a bigger celebration.  All of his friends came over to camp out on our property.  There was a water balloon fight, a campfire, and a few games of capture the flag before retiring to their tent.  I was a bit worried about how late they were going to be out and about, getting into trouble.  Thankfully, this is a great group of boys.  Without being told, they got into the tent at 10:30 and were all asleep by midnight.  It was the easiest party ever! 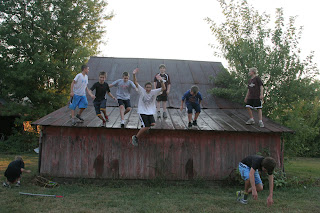 Oh, and they hung out on the barn roof.  Always a favorite thing for city-folk to do!

Lastly, we had a little one turn nine.  Unfortunately for him, his birthday lands smack in the middle of soccer season.  There isn't a single weekend near his birthday that has room for a party.  We have our family celebration on his actual day, but he has to wait weeks and weeks for his friends to enjoy it.  We try to make it worth the wait.
This weekend we had his party, only 6 weeks belated.  It was a sports extravaganza, where everyone was to dress as his favorite athlete.  The boys played football and kickball, then an impromptu sword battle broke out.  As with most parties, the unplanned activity is the one that everyone will remember the most.  They spent 45 minutes charging the forts and running all over the 7 acres.
In my previous life I was a cake decorator for Kroger, so I always make birthday cakes for the kids.  This year, the nine year old had a simple one to make, but he loved it.  All I did was make the cake look like a soccer field.  I made it special by cutting out a photo of him playing in a game, putting it on a toothpick, and positioning it in front of the goal.  He and his friends loved it. And it only took me 10 minutes!
(I took the photo of the cake out, since it had too much personal info on it.)

Even though it makes me a little sad to see them grow, it is so exciting to see the kinds of young men they are becoming.

Do you have a favorite party you have thrown for your child?