Is It Wrong to Use the Title of Another Blogger if It Fits My Post? TToT Week 71

Honestly, I can't take one more thing being thrown at me this week, good or bad, big or small.  I am emotionally spent.  My brain is overflowing with stuff that has happened or needs to happen.  My body is kinked and knotted and making it difficult to turn my head or bend over.  I am so wiped out I can't even come up with any other synonyms for "worn out", so we'll just leave it at that.  Or steal a word from someone else's blog.  "Clobbered" is a good word.  You'll get some idea of my week through my thankful list.

My first thankful is for my great-aunt.  Ten days after the first symptoms emerged, seven days after her cancer diagnosis, Aunt Donna passed away on Wednesday night.  She went peacefully and surrounded by family.  She didn't suffer at all, and after 22 years she is finally with her husband.

Secondly, I am thankful that the funeral isn't until Monday.  If it was over the weekend, there would have been all sorts of trouble, since my nephews are here until Saturday night.  If it was later in the week, I would have had to reschedule Cuckoo's special trip to Florida happening on Thursday.  It's all working out logistically, which is a huge part of why I am still functioning.

Kick back and relax for my thirdly through eighthly. I'm just going to talk about my nephews, because they brought all sorts of sunshine.

The older of the two nephews (aged 12) comes to visit every year, for anywhere from 3 days to 2 and a half weeks.  He gets so excited to come.  His siblings are two younger girls and the 1 year old boy.  A week of hanging out with my boys makes him ridiculously happy.  When they were dropped off, he jumped out of the car and came running up to the house to give me a hug, then went directly off to find my big kids.  At one point during the week, he asked which day he would be going home.  When I told him I didn't know yet, he replied, "It's better that way.  Then I don't have to be sad counting down the days until I have to leave."

Oldest Nephew completely appreciates my cooking.  At the beginning of the week, I asked him what his favorite dinners were.  I made every one of them.  Each night, at least one of my kids was not excited about the meal.  My nephew would look at the unhappy child and say, "Just taste it! It's delicious!"  I can't tell you how happy it makes me to have someone enjoy my cooking so thoroughly.

Littlest Nephew is only 18 months.  He is adorable and as easy as a 1 year old gets.  He ate everything I put in front of him, he slept through the night (11-12 hours) and he napped well.  Plus, he didn't destroy anything except Turken's plant from school which was sitting on a window ledge. This house is far from baby-proofed these days, so there was plenty of opportunity for him to get into trouble.  While I did get plenty of exercise this week (Have mercy!  I now know how I was able to stay slim when I was having a baby every year!) chasing him around, it could have been much, much worse.

While my kids were at school, the nephews and I had fun doing all sorts of things around town. 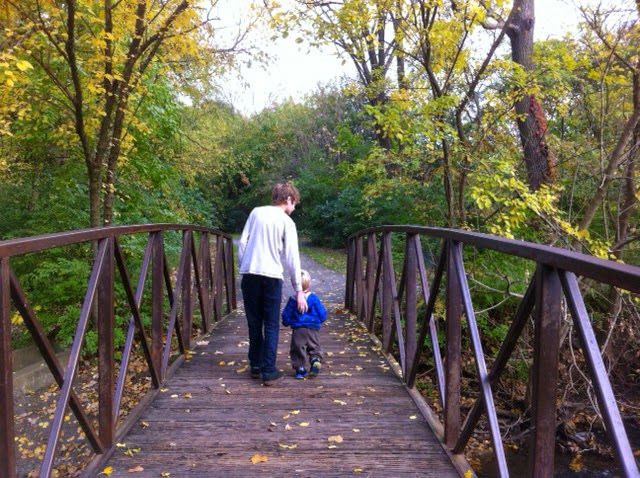 At the Children's Museum:

While my kids were home, we had fun playing games and playing outside in the beautiful fall weather.

It's been a wonderful week full of time for the cousins to spend some time together and for Littlest Nephew to get to know us.  It was also a good week for Cuckoo to get a little perspective on real life. For the first time in his life, he was not the center of attention.  His position as cutest, littlest kid in the house was usurped.  He did well with it for most of the week, but on Thursday he did sadly and dramatically tell Buttercup, "I want him to leave.  Everyone loves him more than me."  I'd feel bad for him, but he had a great 5-year run.  And it will go back to normal come Saturday night.

Ninethly, gas prices have dropped nicely.  A 12-passenger Ford Econoline isn't exactly known for it's good gas mileage, and with all of the driving we do, lower gas prices save us loads of money.

Tenthly and lastly, technology can be wonderful.  I have never, ever in one week written and received so many texts.  I used it to keep up with what was happening with my grandma and aunt.  I was able to send photos of the nephews to their parents all week, calming their worries about how Littlest Nephew was doing.  My dad was able to send us the last photo of my aunt before she died.  (My grandma was lying in bed with her, holding her hand.)  I could keep up with my teens, as plans changed unexpectedly and reminders were needed each day.   I could record videos of the boys doing the cute things they do.  I was able to coordinate the sale and exchange of pork products, even when I was delayed by closed roads.  I could keep up with a friend who had surgery this week, even through all of the changes and frustrations. I could make all of the necessary changes to the schedule to allow me to go to Ohio again on Sunday.  All that and many other, smaller things to boot.

Remember how last week I said not to expect to see much of me over last week?  Well, I'm going to say it again, except I really mean it this time.  I will be in Ohio the beginning of the week, home on Wednesday, and in Florida the end of the week.  That does not leave much time for much, and the ol' blog will have to be the first to go.

Cuckoo is bouncing off the walls excited for his first trip.  I'm too sore from the surgery and carrying a one year old to bounce, but I'm just as excited.  Besides having the chance to take this trip with my baby boy, we'll be staying with my blog friend, Jen, for a couple of nights.  We'll even be trick-or-treating with her and her kids.  We're going to have so much fun!  As usual when I travel, I'll be posting on Instagram so my family can keep track of what we're doing.  Feel free to check in there if you're interested.

Alrighty then, that's more than enough from me.

Whether you were clobbered or not, you had to have something for which to be thankful this week.  Let me know what it is!