Big Chicken News and a New Song to Stick in Your Head - TToT, Week 24

He is a wise man who does not grieve for the things which he has not, but rejoices for those which he has.
~Epictetus

1.  I am thankful for the one chicken who finally started doing what the good Lord intended. 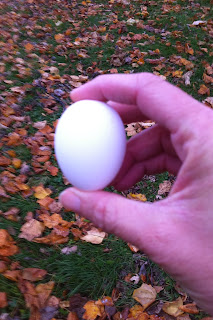 She managed to lay three eggs this week.  The others better follow suit, or one of these days I'll be writing, "I'm thankful for lots of chicken and noodles."

2.  Speaking of chickens, I am thankful for our redneck fence.  I will not call it impenetrable anymore, seeing as how each and every day I have to catch at least one chicken and put her back inside.  Yesterday, I heard a chicken commotion.  I looked outside and saw one chicken on the roof of the coop, another in the west side "holding area", and another in the garden.  I simply had to go out to the back of the coop, and the one on the roof simply flew back into the pen.  I next went to get the one out of the garden.  I was a tad worried about how I was going to actually catch her before she ran into a dog, but I worried for nothing.  As soon as I got out there, she simply ran around the coop, into the east side holding area, and hopped up onto the net. 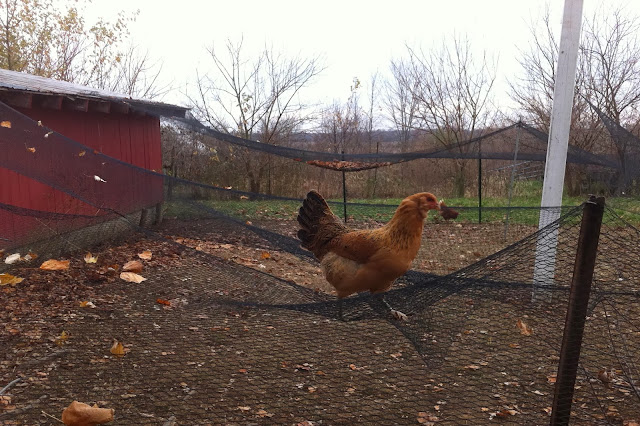 She eventually hopped her way back into the pen.  In the background you can see the other chicken in the west side holding pen.  I climbed in there,

and she started running back and forth along the redneck fence, looking for a way back in.  I went after her, but never had a good angle to grab her.  At one point, she stopped, turned, and looked at me as if to say, "Good grief, are you ever just going to pick me up???  I have to do this song and dance to make it look good for my friends, but really, I'm making this pretty easy for you.  Can we move this along?"  She then turned back around and stood there.  I grabbed her and put her back over the redneck fence.

Why am I grateful for this???  Because in the past, the chickens would all be getting out and immediately going into the yard with the dogs/coyotes.  With the redneck fence, only a few can, and they are almost always stuck in the holding area, safe and sound until we put them back in.  We haven't lost one yet.  (Please be so kind as to knock on something wood right now.  Thank you.)

3.  I am thankful for funny videos and the people who introduce them to us.  This week, we discovered Water Wars, which we will be doing and posting a video of our own soon, and "What Does the Farmer Say?"  (Huge thanks to Our Adventures with Riley for posting this on my Facebook wall.)  This Kansas farm family has made all sorts of parodies of famous songs.  Each one is funnier than the last.  I am especially thankful, because it has finally gotten the kids to stop singing "What does the Fox Say?".  They are all over this version.

4.  I am thankful for COW.  This week he brought me flowers just to make me smile.  Plus, he massages my legs for me.  He hates to massage my legs.  No, it's not because of my hairy legs.  When I have Lupusy flares, my legs and joints really, really hurt.  While a massage hurts so badly it usually causes my eyes to tear up, I feel a bit better afterwards.  COW hates to be the one making me cry, but he does it anyway, because I ask him to.

5.  I am thankful for sunshine.  The temperatures have dropped into the shivering numbers (It even snowed one day!), but the sun has been out most of the week.  Our house faces south, and right at about naptime, the sun shines right through the window and lands on the spot on the couch where I sit to work on the computer.  It is the one time of day I am perfectly toasty warm.

6.  I am thankful for our ability to stumble upon funny shows.  I don't know how we found it, but this spoof of "The Bachelorette" cracked us up.  (I can't believe I just admitted that.) 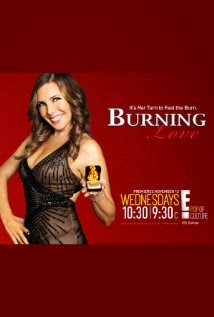 7.  I am thankful for the end of soccer season.  Basketball has started, so our weeknights can be a bit busy, but the weekends??  Oh, the weekends.  So much easier without soccer tournaments eating up every waking (and some non-waking) hour.

8.    I am over the moon thankful for Buttercup.  She has stepped up and been a big help this week.  I received a call from someone on Monday afternoon asking if I could make some cookies for the teachers for the following morning.  I would have had to do make them at 9:30 that night, after Star's practice.  Buttercup made them for me while I was gone.  And another night, I underestimated how long it would take to get the meal in the oven.  3/4 of the way through the prep work, I had to leave the house to get Giant to practice.  I called Buttercup in, gave her instructions, and left.  She did a fabulous job getting everything put together and in the oven for me.

9.  While I am good at making the kids' appointments, I have been extremely negligent in having my own check-ups.  The last time I saw my OB/GYN was the day I gave birth to Cuckoo.  I haven't seen a doctor of any kind in over two years.  This is especially bad since I am over 40, my mom has had cervical cancer, my grandma died of colon cancer, and I'm supposed to get my blood checked every year.  (I told you I was extremely negligent.)  I finally called yesterday to make an appointment.  Since I haven't been in so long, I was considered a new patient.  New patients get in much sooner than existing patient.  I am thankful for my appointment date of Dec. 4, at which I will receive my first mammogram and see the doctor.

10.  I am thankful for my friends and family who have been pestering me to get this done.  I did not make it a priority, but they did.  So it is done.

Ya'll can get off my back now.

What are you thankful for this week?

Email ThisBlogThis!Share to TwitterShare to FacebookShare to Pinterest
Labels: 10 things of thankful, the farm, the kids