To Shave or Not to Shave

Some men have faces made for facial hair. 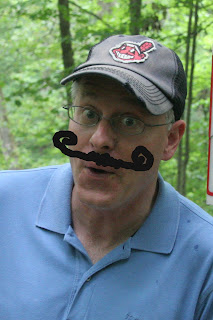 OK, I drew that one on, but during the month of Movember, we did learn that some men just look better without the 'stache.  (During November, men all over the country were growing mustaches to bring awareness and information about prostate cancer to the world.)

The following men can rock the upper-lip whiskers and would look downright foolish without them.

Today, another mustache was added to the world's favorite famous mustache list. 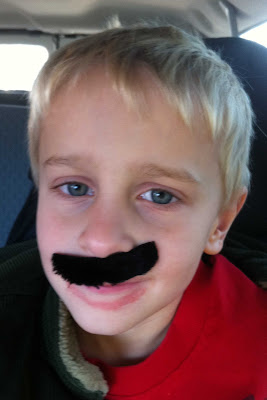 I am aware that it looks like I drew that mustache, but I swear I didn't.  You should be able to tell.  I would have drawn it straight.

I have no idea where he found it (except that it was somewhere in the van.  Don't worry, it wasn't on the ground in the parking lot or anything like that.  (I hope.)) or why he decided to wear it, but wear it he did.  All afternoon.

Including during our trip to Meijer.

He was the highlight of many shoppers' day.   It's 14 days until Christmas.  Many, many shoppers gave me the grin and chuckled as they went on their way.

When I first saw the press-on facial hair, I just giggled and shook my head.  He wanted to know why I was laughing.

I just smiled some more, and he asked, "Is it because I have that red mark under my lip?"

Yes, dear, I'm laughing at your chapped lips.  Because I'm mean like that.