The Good, the Funny, and the Downright Gross

I have been a bit vocal around here that I am sick of pink.  I'm tired of everyone and their brother wearing it, buying it, and putting it on every single product they can think of.  We're all aware of breast cancer.  We all want and know that scientists are searching for a cure.  But the whole pink thing has gotten out of hand.  (I am saying all of this as someone whose mother has had cervical cancer and mother-in-law has had breast cancer.  I know of the suffering and difficulties of having cancer.)  There are lots of other diseases and disorders that could use some attention.  Other afflictions that no one is talking about, let alone wearing a color to raise awareness.  And how much money is actually going to breast cancer research from the sale of all of these products anyway?  I'm guessing a whole lot more is going into the companies' pockets.

While watching a few minutes of football this evening, someone mentioned that the yellow flags are pink for the games this weekend.  The children then went through the following conversation in a matter of seconds as I sat on the couch right there with them.

"She doesn't want people to be aware."

"She doesn't want them to find a cure."

This whole business of my children getting older and wittier is really getting on my nerves.

***************
On Friday, Cuckoo was perturbed that there was a hole in his PB&J.  He wanted my to do something about it, and was quite unhappy when I told him that the bread just baked that way, came that way and we couldn't do anything about it.   We then moved on.

A very tired Cuckoo heard me, stomped his foot, and yelled at me, "I don't want a hole in my sandwich!"


*************
﻿
So I've decided that I can't give away the old oven until I clean it.  I gave it a spray with no-fume oven cleaner, waited a few hours, then went back to it.  I had no idea that ovens could get so dirty.  Nothing had ever spilled in it, so in seven years I hadn't cleaned it.  I now realize my mistake and have vowed to never let that happen with the new oven.  As I was scraping the years of crud from the inside of the door, Buttercup saw, gagged, then asked, "Is that why we couldn't see the food cooking when we looked through the window?"
*************
Buttercup has been playing soccer for six years now.  She has always played left defense.  She loves it.  When coaches have asked her if she wants to play a different position, she adamantly replies no.  This season she has a new coach, and while she still plays defense, he has been encouraging her to play farther up the field.  She usually stops just past mid-field, but he wants her up even farther.  Something must have clicked this weekend, because she played WAY up.  Like see the whites of the goalie's eyes up.  And while she was up there, SHE SCORED!  In all of these years, it is her first time ever to score a goal.
I'm pretty sure I embarrassed the tar out of her when I cheered her on and congratulated her from the sidelines.
***************
Star is the goalie for his soccer team.  They played three great games this weekend, which put them into the championship game.  Unfortunately I wasn't able to see that one, as I was home with the little boys who had gone way past the point of being patient and wanting to watch soccer.  I heard all about it, though.
Apparently, Star played an awesome game, both in the half that he was in the field and the half that he played goalie.  He made several good saves and helped them get to a shut-out.  Unfortunately, the other team shut us out, too, so the game ended in a 0-0 tie.  When there is a tie in a championship game, it then progresses to a PK shoot-out.  For those unfamiliar with soccer, a PK is basically a one-on-one between a kicker and the goalie.  Best out of five kicks wins.
The coach called Star and our other goalie to the side and asked them which of the two was the better goalie at PKs.  Star immediately said, "I am."  (Have I ever mentioned that Star isn't the most humble person in the world?)  So, Star was in the goal for the PKs.
While there, he did this:
Yup, he did the rare thing of blocking a PK shot.
The crowd went wild.  I know they did, as I was on the phone with Hubby and refused to hang up until the whole thing was over.
Our first three kickers managed to get their kicks in, so Star's team won.
I hear that the team stormed the field and tried to pick him up, but that turned out badly.  They settled for chest bumps and high fives.
Check out the grin and the bling: 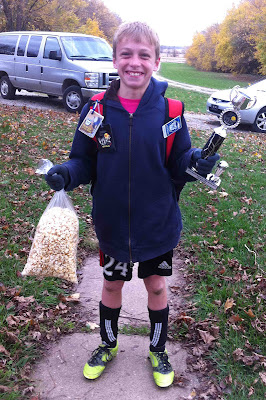 Winner, winner, chicken dinner!
Really, the tradition for our family is kettle corn, but "winner, winner, kettle corn" doesn't have quite the same ring to it.
Have a lovely day!
﻿
at 10:23 PM