In my time on this earth, I want to experience as much as I possibly can.  I love to try new things, visit new places, learn a variety of random things.  So when I found out that Stasha's Monday Listicles topic this week is Firsts, I was stumped.   I have had so many "firsts", I didn't even know where to begin.  So, I'm treating this as a stream of consciousness post.  The first ten things that come to my head (that are kid- and dad-reading appropriate, so don't be expecting any hoochy-koochy, hanky-panky references) will be what I write about.

1.  My first date was one month before my 16th birthday, and it was with my now-husband.  I lived with my mom at the time, who had a rule that I couldn't date until I was 16.  My dad didn't have that rule, so I agreed to go on the date on a weekend that I was at my dad's house.  Neither Hubby nor I could drive yet, so he planned a double date with an older friend of his.  In the first 20 minutes of meeting the other girl, she pulled me into the restaurant's bathroom to tell me what a jerk her boyfriend (Hubby's friend) was and that they would probably break up that night.  Then, we went to the other guy's house to watch a movie.  It was my first moral dilemma, as no parents were home, and my dad specifically asked me if they were.  I guess we can say that my first date is also the first and only time I lied to my dad.  (Sorry Dad!) The movie we watched?  Carrie.  The most awful, uncomfortable movie to watch on any date, let alone the first.  The whole evening was awkward and guilt-inducing, start to finish.  I never lied or decieved my parents again.  It's actually quite amazing that Hubby and I even had a second date.

2.  Stasha of Monday Listicles fame inspired me to finally try Instagram.  The first photos I posted on it were from the morning Cuckoo and I spent at the park. 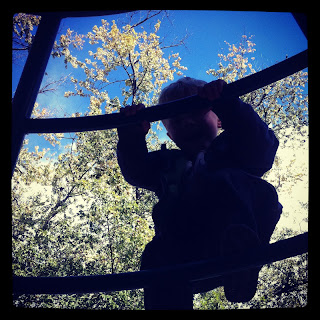 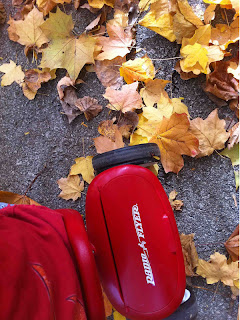 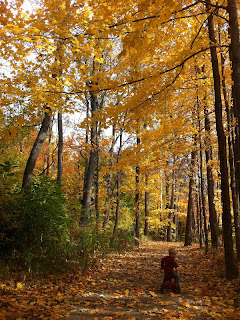 So far, Stasha is the only person I'm following.  If you Instagram, I'm under "inthecoop" I think.  I'm not exactly fluent in either iPhone or Instagram yet, so I don't know for sure.

3.  I grew up in the snow belt in northeast Ohio, where even preschoolers knew what "lake effect snow" meant.  We rarely had snow days off of school, as ODOT knows snow and how to handle it.  I tell you this, because I want you to be impressed and horrified and scared for the younger me when you hear that my first time behind the wheel of a car was on a snow day.  When I called the instructor to confirm that my first lesson would be cancelled since school was out, he replied, "You're going to need to learn how to drive in snow sometime.  Might as well be today."  I have no idea why I had never driven with my parents before this, or why the heck my mom let me get in the car with the guy.  We'll just say he was an unconventional instructor.  He also made kids go through the drive-thru to get his lunch and stop to pick up aluminum cans on the side of the road in order to get the nickel refund.

4.  The first time I used a computer was in 7th grade.   My school bought its first computer, and it was put in our classroom, since our teacher was the only one who knew how to work it.  The administration must have been very worried about the computer's safety, as our classroom's wooden door was replaced with a giant metal one with many impenetrable locks.  I skipped recess almost every single day in order to work on that computer.  I had my own floppy disk to save all of the programs I wrote.  Programs that would do things like make the screen blue, then fade to the word "Hello" written in green.  Totally advanced stuff.  I was the best one in my class.  Seventh grade was the last time that I was on the cutting edge of technology.  Shoot, it wasn't that long ago when my sister said she'd google something and I asked, "What's google?"  She was quite disappointed, probably even disgusted with me.  (This kinda explains #2 now, doesn't it?)

5.  Hubby's favorite thing about Thanksgiving is his momma's homemade pumpkin pie.  He is rather anti-social, so he enjoys cuddling up with a great big piece of pie and thus avoiding all conversation.  One year when he was in law school and I was working at Kroger, I had to work on Thanksgiving Day.  We weren't able to go back to Ohio, so instead we went to my mom's house, since she lived only two hours away.  I felt bad that he wasn't going to get his mom's pumpkin pie, so I decided to make one.  I mashed, I mixed, I slaved away.  While the pie was in the oven, something was eating at me, like I forgot to do something.  And then it hit me.  While baking my first pumpkin pie for my dear husband of only a year and a half, I forgot to put the sugar in the mix.  From the taste of that pie, sugar is a necessary ingredient when making a pumpkin pie.  There has not been a second pumpkin pie.

6.  Phoenix was the easiest toddler ever born.  He threw maybe five tantrums throughout his toddler/preschool years.  Of course, in my naivete, I thought it was because I was such a good mother.  I knew how to raise children better than anyone I knew.  I very clearly remember the first ridiculous parenting comment to come out of my mouth.  Phoenix was 18 months old.  I was visiting with a friend, and I said, "Why do people yell at their children?  I can't imagine yelling at mine."  I was such a stupid, cocky idiot.  For the record, not only can I imagine myself yelling at a child, I've done it many, many times.

7.  The first time I went white water rafting was during Hubby and my 10th anniversary trip to Maine.  In our raft with us were the guide, a teenage boy, and the boy's father.  I had to work my tail off that day.  We were fortunate to stumble upon the one company that encouraged us to stop and do fun mini-adventures along the way donwstream.  We took turns jumping off a 20-foot cliff to land in a quickly moving portion of the river.  We "surfed" a waterfall, then carried the raft back up the river in order to do it again.  Hubby is an Eagle Scout, so he had been white water rafting many times, and after the day was done told me that we had just done a level 5 river.  He hadn't done one that big before.  A man in a kayak went down the river with us, videotaping portions of our ride.  Upon returning to the cabin, we all gathered to watch.  Throughout the entire video we could hear me screaming my head off.  I sounded like I was being tortured, but in fact I had some of the most fun I have ever had in my life.  A week after our return, my left arm was still hurting something fierce, so I drug myself to the doctor.  One x-ray later, we came to find that I had a small fracture in my arm from all of the hard rowing I did that day.  I was in a sling for a few weeks, which made caring for four little kids just a bit challenging.  I still say it was totally worth it.

8.  In first grade I participated in my first spelling bee.  The first round, I was out on the word "log".  I was forever messing up my g's and j's, so spelled it "l-o-j" and got knocked out.  Luckily for me, it was the best out of three, so I was still able to win for my class.  This meant that I got to participate in the schoolwide bee.  We didn't line up in front of the school at an assembly.  We did the spelling bee over the intercom.  As a first grader, I got to go into the inner-sanctum of the office to actually speak on the intercom.  (Do any of you even remember intercoms and how exciting it was to be on them??)  The first word I had to spell?  Bluejay.  Guess how I spelled it?  "b-l-u-e-g-a-y"  In a school that spanned from first through eighth grade, I embarrassed myself by spelling bluegay.  I was brought down on my first word on the intercom by the beautiful, innocent-looking bluejay.  Bluegay.  For crying out loud.  I'm still a little bitter about that one.

10.  The first time Hubby got to see me lose my hormonal mind was the day he ate the last of the crackers.  I was pregnant, had worked all day long and into the evening, and came home to find Hubby in his usual spot on the couch studying and watching Road Rules.  (To be fair, as a law school student, he was not allowed to hold a job and he was a very good student who actually did well if he had background noise while he studied.) I was exhausted, but went in to the kitchen to make my own meal of canned tomato soup.  As it "cooked", I got out my bowl, my spoon, my drink, and my napkin.  I went to get the crackers, only to find an empty spot where the box used to be.  I called out to Hubby to ask where the crackers were, and he said, "I had some soup and ate the last of them."  I immediately turned into a sobbing mess.  Full on tears, snot, and hiccuppy hot mess.  "All I want to do is sit down and eat some soup and I can't because you ate them ALL and now I have soup heating on the stove and no crackers to eat it and soup isn't any good without crackers and that's all I want you terrible, inconsiderate jerk"  For several moments Hubby just stood there completely dumbfounded.  Then he snapped to and apologized profusely, offering to go out and get me some new crackers.  "No, because by the time you get back it will be cold and it will be late and I am too tired to wait that long so just sit and watch me eat my crackerless soup and feel guilty while I pout and shoot dirty looks your way and huff and puff between bites and remember this the next time you start to take the last of anything in this house again."   To this day the poor man will not take the last of anything without asking me if I want it.

I've already had a peek at some of the lists people have written for today.  So many directions a person can take with this one.  Stop over and join along!