This Time, It Is NOT My Fault

The dog is onto me.

He has become a weatherman/timekeeper of sorts.  He can predict the exact day and time that he will be getting tied up in order for me to let the chickens loose.  So he hides.  Luckily for me, he hides worse than a two year old.

Yesterday I opened the van door and told the little boys to jump in while I let the chickens loose.  That threw Roy the Wonder Dog way off.  Usually, an open van door means I'm getting in, too, and driving off.  When I got out of the van, he panicked.  Literally lost his mind and jumped into the van!  Once he got in there, he was trapped.  No place to turn around, human in the doorway, and two little boys screaming their little heads off.  I could almost hear Roy berating himself, "Well that was just brilliant.  Great move.  Go to the one place where you are sure to get caught.  Stupid, stupid, stupid."

You may think, perfect, just grab him and pull him out.  I say hold that thought.  He is a 95 pound dog, trapped face first into the aisle of a van.  He's several feet off of the ground, and I have two little boys about to do some serious injury to themselves in their hysterical scramble to get away from the dog.  Not that easy, but I am Super Farmer Mom.  I whipped out the cape, used my super-human strength to wrestle him out, got the kids calmed, drug him to the back of the house, and got him all squared away.

Finally I was able to open the coop.

And I wasn't even late to pick the big kids up at school.

When we got home, we took advantage of the weather.  When it is sunny and near 60 degrees on Feb. 2, you do not waste your time on homework, laundry, cleaning, or cooking.

Turken decided to go chase some chickens who were getting way to close to the porch. 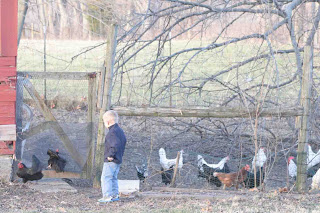 As I got closer, I could see something in that field you see behind the tree.  It was black and white, and looked a whole lot like a pile of feathers. 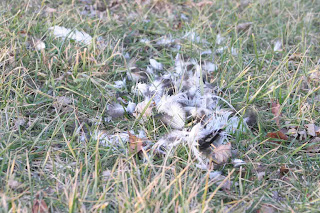 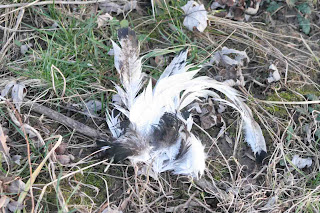 that's exactly what it was!   AAAAAARRRGGGGHHHH!!!!!  I checked.  Roy was tied up.  It can only mean one thing.

I looked to the woods on the other side of the field, covered Turken's ears, 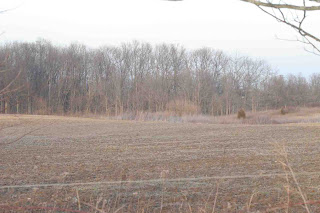 and cussed out those blasted coyotes living there.

I have never pretended to be the world's best farmer.  Not even the world's most so-so farmer.
We were very good at closing up the coop every night with the flock of chickens that came with the house.  (Yes, they all died from a variety of other things, but it was not because of the coop being open all night!)  The second batch didn't get locked up, because they never went into the coop.  They much preferred sleeping in the tree outside.  So we got lazy.  We never closed the coop again.  Until last year, when we had the worst case of coyote problem.  I actually saw one jump out of the chicken coop in the middle of the day.  We did start closing up the coop then.  To no avail.  Every one of our chickens was taken.  Oh, and one of our pigs, too.  But that's a different story.

So with this flock, we have been the perfect little chicken farmers.  We secured the fence so nothing could get in the run.  We tie Roy up, so he hasn't had a single chicken dinner.  We only let the chickens out for the afternoons, and we have closed up the coop every single night.  Blast those stinkin' coyotes.

It is time to call in the big guns.  Literally.

A man from church/school and his brother actually hunt coyote.  I had no idea it was even a possible hobby until they heard of our problem last year.  We had them come out over the winter, and though they found lots of tracks, the coyote didn't respond to the call.  (Hunters can't go into the field or woods, as it isn't our property.)  Looks like they are going to have to pay another visit.

I'd call him today, except he'll be at the hospital.  Apparantly Coyote Hunter's son swallowed a piece of his braces that broke off at school yesterday.  He's having to have a procedure (don't know the exact procedure, 'cause 13 year old boys don't go for details) done in order for the doctors to get the pieces out.  Really.  That never would have happened with the enormous metal contraption that passed for braces that I wore!   Anyway, he probably won't have much time for coyotes today.

But, all was not lost.

We took advantage of the weather and got a little mower maintenance done. 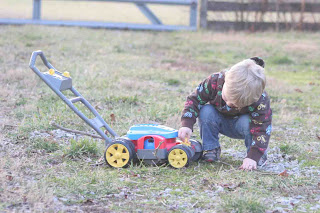 Even got to mow a bit.


Some sunset basketball rounded out the night.


And, have mercy, we had leftovers in the fridge for dinner.