Hopefully, I'll Be Going Through a Lot of Candy

The time has come.  We knew it was coming.  All the signs were there.  But it just wasn't the right time...until now.

Cuckoo Maran, my little man, you are sitting on the potty.

Back in the old days, we had long, lazy days at home.  Potty training wasn't fun, but it was easier.  We could stay home and get it done in a relatively short amount of time.

The three oldest kids were completely out of diapers by two and a half.  Giant wasn't, but it wasn't because he didn't want to.

Hubby wanted to go to Disney the moment Phoenix was born.  He went most years of his childhood, and he couldn't wait to start taking our kids.

I, on the other hand, wanted to wait until the youngest was five.  All four kids would be great ages to go.

So we compromised.  We agreed that we would book the trip when Giant was completely potty trained, with no fear of accidents.

I am not kidding when I tell you that Giant went to his three year check-up in a diaper.  The doctor noticed, and asked, "Why is Giant still in a diaper?  Your kids are always trained well before now."

I mumbled, "I don't want to go to Disney World."

She pushed for clarification.  "Did you just say that he is not potty trained because you don't want to go to Disney World?"

She actually scolded me.  "That is pathetic.  You get him in some underwear as soon as you get home."

Giant was trained in one day.  He had one accident, and that was the end of that.  We were off to Disney soon after.

With Turken, I came to all-out hate potty training.  It wasn't really his fault.  It's just next to impossible to learn to use the restroom when you are picking kids up from school and hauling them around to and from soccer.  A bathroom isn't always readily available.

And even when we were at the park or some other fun place, there were five other kids who didn't want to stop playing so we could all trudge to the restroom.

I finally resorted to taking a potty around in the van for emergencies, and will probably do the same this time around.

All I know is that I must avoid this 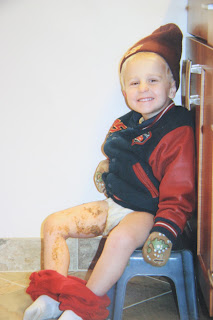 at all costs.  We were driving home from school one day, and Turken tells me that he peed in his carseat.  OK, I can handle that.

When we got home, I sent him upstairs with the words, "Go up to the bathroom and get undressed while I get the baby settled.  I'll be up in a minute to help you."

Good boy that he is, he followed my directions.

As I was still settling Cuckoo, Buttercup comes in the room with a pale, horrified look on her face, and says I may want to stop what I'm doing to go help Turken.

I hand the baby off, and find Turken in the position you saw above.

Besides the entire length of his leg, poo covered his gloves, the cupboard, his dry-clean only coat, his hat, the wall, his socks, his shoes, the stool he was sitting on, and the floor.

And yet, there he sat, with his pants around his ankles, all a mess, with the biggest grin you've ever seen plastered on his face.

It's one of those parenting moments when you have a choice.  Go nuts because of the complete disaster you have just encountered, or return that big ol' grin and tell the boy how proud you are that he followed directions.  Thankfully I was in a laughing mood that day, so he got a big grin.

Brother turned two and a half while I was in Chicago.  So old enough, check.
A month with no out of town trips planned.  Check.
A week without soccer practices.  Check.
A few days with no appointments.  Check.

It's as good as we're going to get.

He wasn't thrilled at first.  But when I explained to him that he would get an M&M every time he told me he had to go or went when I told him to, he was much more willing.

Yesterday, we had a lot of this: 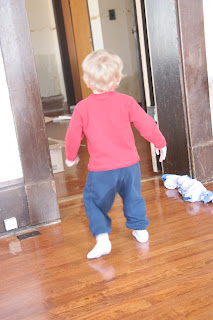 The funny little penguin waddle to the bathroom with wet pants.

Not once did he actually go while sitting on the toilet.

Today, so far, one wet pair of pants down, but he did figure out how to actually make his body pee when he wanted it to.  Score TWO M&Ms for that one!

So the journey begins.  I won't bore you with the daily, dirty details.

But I'm sure there will be a horror story to report one of these days.  You'll be the first to hear it.