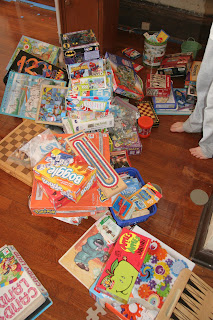 This is the result of a frustrated mama.  Every game and puzzle we own is out on the floor of the game room.  And the boy with the toes you see has been given the task of loading it all back into the closet.  (That ugly closet that I told you about yesterday)

24 hours ago:
We played Boggle.  Things went as usual.  Red Star came up with some very amusing, misspelled words.  Turken took his job of timekeeper quite seriously. 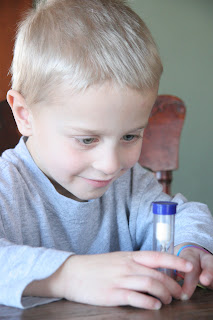 Cuckoo carefully wrote his own words. 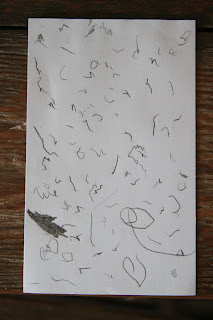 And Phoenix managed to beat me once out of the five rounds we played.  But he was happy to pull out the victory dance. 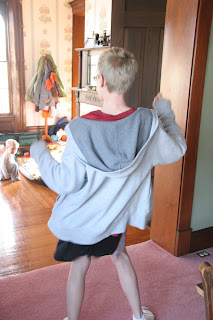 When the game was finished, the kids packed up the game, and I went to put it in the closet.  I had to do some serious rearranging in order to get it to fit.

20 hours ago:
Hubby and Giant were at the Pacers game, and the little kids were in bed.  The other three kdis and I played a riotous game of Who-nu.  Lots of laughing and good cheer.  We packed up the game, and one of the kids put it away.  I did not like the sounds coming from the general vicinity of the closet, but I was too tired to investigate.

6 hours ago:
Red Star and Buttercup began playing Spongebob Monopoly in the fort they built in Buttercup's room.  When they got the game out of the closet, I heard an awful crash, an "Uh, oh", and a request for help in cleaning up.  Cuckoo offered to help, so I avoided the area. 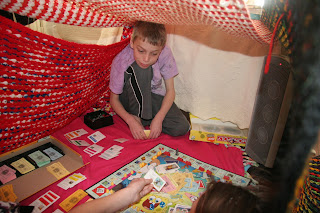 Turken: "When we went to the zoo.  There are no games at the zoo and I didn't want to play one."

4 1/2 hours ago:
Turken convinced Phoenix to play Monopoly Jr. with him 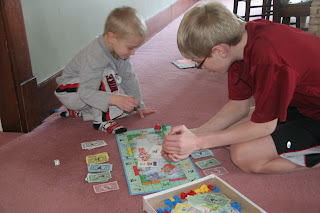 while I played Candy Land with Cuckoo.  Unfortunately, we were missing half of the cards.  While I was quite OK with the missing gingerbread card (It irks me to no end when someone is just about to win when he pulls the gingerbread card.  I usually stack the deck so it shows up early in the game.), I was not happy about the also-missing, game-accelerating ice cream card.

After the game, I called Buttercup in to empty the closet and put every last piece back with the game it came from.

Giant is my best organizer, so he was given the task of putting everything back into the closet.  Unfortunately, he was still finishing his science fair project, and the closet had to wait a while.

3 hours ago:
Cuckoo saw the closet contents as an opportunity.  He made a bigger mess by sneaking game after game to his box fort. 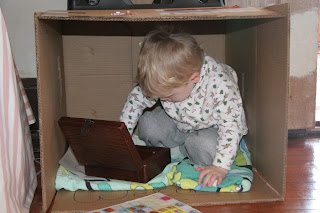 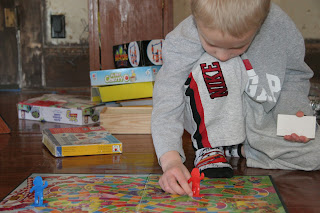 So now, finally, Giant has finished his project and is organizing the game closet.

Good thing the kids got a lot of games in over the last two days, 'cause no one will be allowed near that closet for a long time.  I don't give up an organized space very easily.