A Lot Can Happen in Only One Week!

That was mighty rude, wasn't it?  I write a post about how awful I'm feeling, then disappear with no explanation for a week and a half.  So sorry.

First, thank you to all who offered help and well wishes.  The cold managed to settle into my face this week, so I am on antibiotics.  Should be feeling my old self very soon.

Wednesday last week I turned on my computer, and imagine my dismay when all I got was warning after warning telling me that my hard drive was inaccessible.  According to my computer, it had 14 things wrong with it, and only five could be fixed.  Not what I wanted to hear.

Certainly not what my kids wanted to hear.  As soon as it was announced that the computer was dead, the panic began.

"But I have to type my research paper!"
"But I have my science fair project due next week!"

"I have to do some research for social studies class!"

"What happened to my stories that were on there?"
Selfish buggers.  What about my blog???

All is well.  We got the new computer up and running last night.  It is a very different beast from my old laptop.  This one is a desktop with wireless mouse, keyboard, and screen.  I have a lot to learn.

Buttercup offered to help me break it in, but I told her no. Being that I have 30 years on her, I could figure it out on my own, thank you very much.

I turned it on, but I couldn't type anything.  After letting me flounder for a minute or so, she came over all haughty-like, picked up the keyboard, flipped it over, and moved the switch to "ON".

I knew that.  Totally.  It was exactly what I was about to do.

I won't go through every single thing that you missed this week.  You don't need to hear about the soccer practices the kids had or the awesome chicken and noodles I made.  I won't bore you with the details of my little Turken being famous and all when his face graced the front page of the Living section of the newspaper.  But I will let you in on two fun days that we had this week.

First, we got our first accumulating snow.  Sure it was only an inch or so, but it was perfect to play in.  The temperature was 30 degrees, so we didn't freeze our hind ends off, and the snow was superbly pack-able.  The little boys and I were outside for a couple of hours while the big kids were at school.  It was the first time that Cuckoo ever played in snow.  Last year, we had way too much for him to play in (can't really play in snow that is 13 inches deep when you are only 24 inches tall!), so it was extra fun.

We went sledding on our hill. 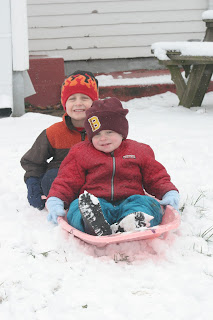 And made our first snow orangutan. 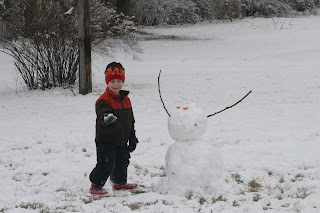 It was supposed to be a snowman, but the head fell off and Turken picked out unusually large sticks for arms.  Orangutan it is.  And yes, it has two carrot eyes that were supposed to be one carrot nose.

Too bad for the big kids.  The snow was melted by the time they got home from school.

The biggest thing that happened last week makes me crazy happy.   After three years, my brother and his kids finally moved back from Hawaii.  They moved in with my mom in Kentucky for now, so last weekend we headed down to welcome them home.  We hadn't seen them since they came back for a visit two years ago, when my niece was two and my nephew was seven.

Before they moved to Hawaii, my nephew would come to stay with us for up to two weeks each summer.  He is such a sweet kid, and I loved having him.  And he loved to come.  Having no siblings, he was thrilled to have a house full of instant playmates.  I cried when they moved soon after his little sister was born.

On Sunday we pulled into my mom's driveway, and I was the last one out of the van, as I was in charge of unbuckling Cuckoo.  All of a sudden, I hear a little boy tearing around the van, screaming, "I'm so excited, I'm so excited!"  Then I was hit from behind by said boy, whose arms immediately clamped around me.  Joy of joys.   All day long, every hour or so, I was grabbed into a huge hug by that awesome little guy. 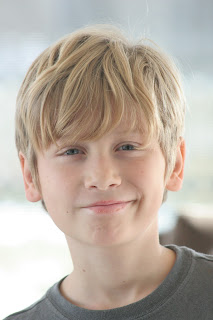 And his sister was just as happy.  Being that half of her life was spent away from us, I was worried about how she would react to a house full of relatives she didn't know.  Never should have worried.  We had a ball. 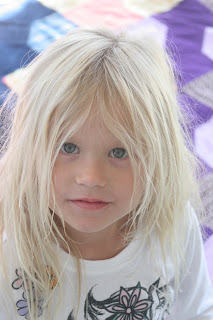 She and I played outside for a good long time.  She grew up on the beach, so the winter coat/gloves thing was new.  I got to show her the fine art of making and throwing snowballs in the little bit of snow that managed to survive in the shadows. 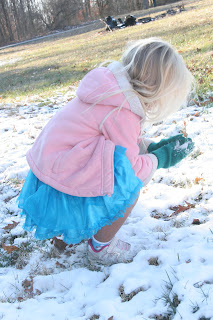 On our next visit we'll discuss the whole "how to wear a tutu in the snow" thing.

My sister and other brother also brought their kids over, so we had a great, loud day.  Time to cuddle with the cousins. 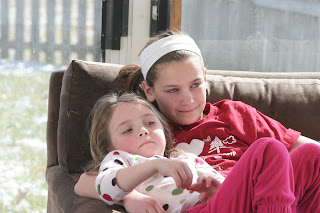 Time to play catch (with a little bit of wrestling and tackling thrown in) for the boys and their uncles. 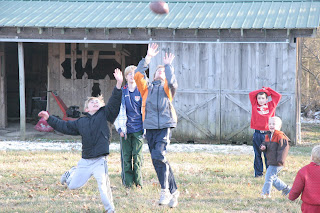 And as an added bonus, time to play with the adorable puppies my sister had gotten the day before. 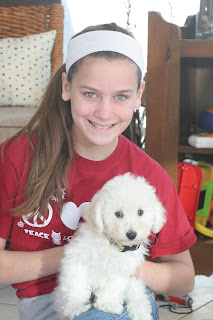 They are called Schnoodles.  Cutest little bundles of fur you ever did see.

Crazy happy to have them back.  To have all the cousins within a two hour drive.

Their parents, too.  But mostly the kids.  I just love them to pieces.

Now consider yourself all caught up.

I'm off to figure out this new-fangled contraption.  Oh Buttercup... where are you???