What's not to love about a toddler?

My baby is almost a year and a half.  I have always enjoyed children at this age, but he is taking toddlerhood to a new level of cute.  And it's not just because he is my last.  He just has a personality unlike the others, and it cracks me up.  Yesterday, he spent half the day with a foam horseshoe around his neck.  We have no idea why, except that it is just typical him.  He also has a thing for hats.  He loves a hat. 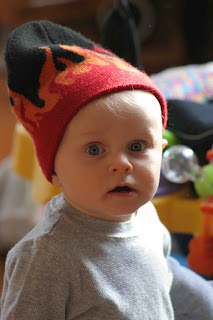 He constantly wears them.  Many times they are over his eyes and he just walks around running into everything.  He doesn't care.  Just so he has a hat on.  Until, of course, we go outside.  Then it comes off immediately.

It is so cute when he tries to do everything the big kids do.  Talking on the phone is typical toddler. 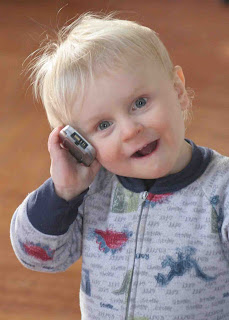 But is racing?  And knowing the commands, "On your marks, get set, go!" 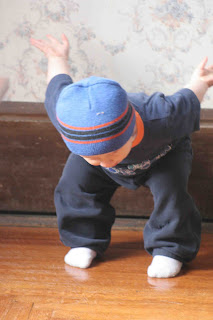 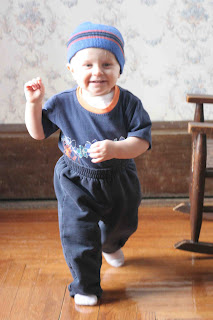 None of the other kids ate junk food until their first birthday cake.  After that, it was a rare treat.  They didn't know how to even identify it, even when someone was eating it right in front of them.  Not so with this guy.  When he was nine months old, he snatched a cookie right out of his aunt's hand and shoved it in his mouth before she knew what was happening.  He can spot sugar-laced food a mile away, and most certainly will not tolerate someone eating it in front of him. 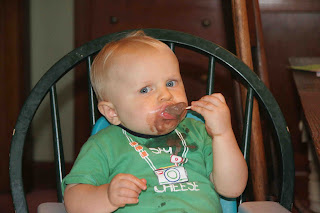 Like all toddlers, he likes to get into trouble.  Dumping a bag of blocks and scattering them around the room is a regular activity for him.  A dining room chair not pushed in all of the way is an invitation as far as he is concerned. 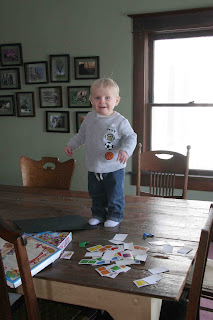 But unlike my other kids, he is built like a linebacker.  He is short for his age, and has a "beer belly" that rivals any middle aged man's.  He uses that low center of gravity to his advantage.  Our poor 2 year old gets tackled on a regular basis, with little to no warning.   Out of the blue, this toddler comes running from another room, straight at the 2 year old, and just takes him out.  Luckily, the 2 year old finds this amusing, at least for now.


Also unlike his siblings, this little guy has a limited vocabulary.  He can say, "Mommy", but it is only spoken in a shrill scream.  The word is usually followed by a sweet little voice asking, "Where's Daddy?"  He has no idea how to say, "Yes", so regardless of the question, he answers, "No".  The tone of his voice lets you know which one he means.

I could go on about this little guy for days.  Unfortunately, he is in the middle of tossing my clean laundry all around the living room (except for his sister's apron.  That is draped over his shoulders.)  I need to go give him a hug.

What do you love about the toddler years? 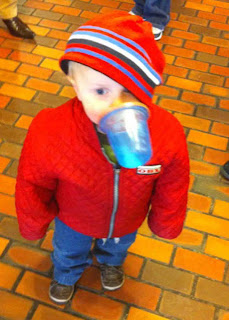