Heavens, it is a rough winter!  It started with the early snow in December, and continued with unusually cold temperatures ever since.  The snow just keeps on coming, but last week was the worst of it.  We didn't get snow.  We got ice.  And plenty of it.  So much ice accumulated that the kids were off for three days.  Public schools were closed for four!  As much as I hate the thought of adding extra days at the end of the year, I am glad that we got a little break to stay home and play.   One benefit of a little farm is that you have plenty of things to do and look at.  We didn't have to worry about sliding into an oncoming car.  There were fallen trees and puddles, and many roofs to look at.  Our cars aren't kept in a garage, so there was lots of ice to break off.  The best part was sledding down our little hill.  Without the sled, we could body sled quite a far ways.  With the sled, you just kept on going until you ran into the fence on the edge of the property.  The kids were out there for hours.

With the bad snow that we had, I have to say that I am grateful to those coyotes.  It would have been a miserable winter to take care of chickens.  Just keeping their water unfrozen would have been a chore.  I know we would have been battling the wild birds in the coop as well.  By now, I might have went ahead and had some chicken dinners myself if the coyotes wouldn't have done it first.  Silver linings.  Never thought I would have found one back in August. 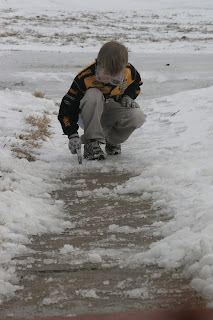 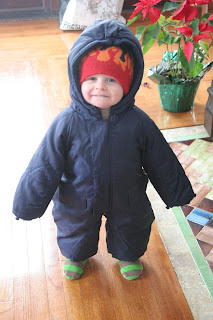 1 year old dressed for the snow
Of course, the time spent dressing him was significantly longer than the actual time in the snow.
at 10:20 AM