I'm looking at it's head!

While I unloaded the groceries this morning, I let the toddlers stay outside and play. (We're having a streak of gorgeous weather around here!)  On one trip outside, two year old wasn't where I left him.  I called his name, and he replied, "I'm looking at it's head!"  Around the corner I go, and see my son sitting in the grass, looking at the head of a dead opossum.  Yes, just a head.  No opossum body anywhere around. 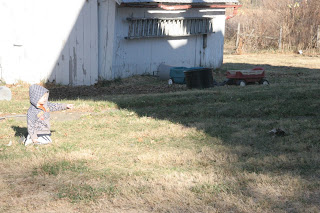 Now, most moms in this situation would flip out.  The first time this happened, I most certainly did.  Part of me wishes I still did.  The fact that I don't means I have seen this same scenario too many times.

We have two outside dogs.  They are so very good to the kids and any other human that comes to visit.  They do, however, take pride in ridding our yard of unwanted critters.  Sure, I would rather they simply scare the offenders away, but this will have to do.  We frequently find carcasses of moles, mice, raccoons, opossums, birds, and sadly, sometimes our own chickens.  Once we even found a weasel. We have learned to simply toss the remains out into the field and move on.  Our children aren't even phased by finding a dead animal.  They actually get excited when the body finally decomposes and they find the leftover bones.
I think the only animals that have alluded them thus far are a skunk and a squirrel.  By the smell of the dogs, I know they have tussled with skunks.  And we have laughed ourselves silly watching the dogs tree squirrels, then try to jump up and grab them.  (One enterprising squirrel actually jumped from the tree to the garage roof, which you can see in the above photo.  There was nothing for the squirrel to grab onto, so it slid down the roof and went flying.  As soon as it landed, the race was on again.)  Apparently, only the truly great dogs can capture skunks and squirrels.