It has been one whirlwind of a week my friends!

1. Andy Grammer helps me keep my energy level up to get it all done. My new favorite song...

2. Last Sunday winter finally caught up with us. We had some nasty snow and ice. Did I stay home? No way! I made Phoenix get himself behind the wheel for a lesson on driving on slippery, icy roads and what to do when things go wrong. He did very well, so we let him drive to school and activities the next day. He managed to keep himself and his passengers (siblings) safe.

3. The stray cat that showed up over the summer is still here. I figured if he/she didn't run when the winter hit, he/she'd be ours. Guess who's still hanging around. I took the cat to the vet this week, found out he is a boy who is already neutered (Woohoo!), and accepted his award for best cat ever. He didn't even flinch when they manhandled him into a prone position to draw blood and administer shots. From what I hear, this is almost unheard of for a cat. 4. On Thursday, Turken had his First Reconciliation. He was as precious as could be leading up to it. He was a bit nervous about forgetting something, so he wrote down the sins he wanted to confess. (He had the paper in his pocket and actually pulled it out to read in the confessional.) Before heading to church, we had a great big bowl of ice cream at the very appropriate Pinocchio's. (Get it? Pinocchio's nose-growth? 'Cause he lied? Which is a common little kid sin???) 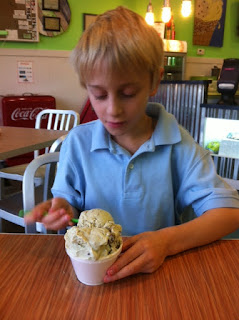 5. I got to cuddle another adorable, tiny baby for a couple of hours this week. She even took a nap on my chest while her mother and I had a great chat. Oh how I love to cuddle a sleeping baby!

6. After a conversation with my mom about how my sister-in-law cooks using a pressure cooker quite often, on a day when I was really rushed to get dinner ready but didn't have any meat thawed, I decided to give it a try. I didn't blow up the house or burn the bottom of the pot too badly and the meet was delicious. I will definitely use it again.

7. Also on Thursday night, Phoenix had a volleyball scrimmage at a facility to which he had never been. He printed directions before leaving, but once in the right area, he could not find the place. He tried to call me, but I was at church with Turken. When I came out 15 minutes later, he still hadn't found it, but he had contacted his coach, who said he was very close. Twenty minutes later, as I was pulling in the driveway, he called again, still unable to find the facility. All I can say is thank God for Google Maps. I was able to pull up the area where he was and see exactly what he was seeing (except he was seeing it at night). I was able to direct him straight to it. (While the directions he had were correct, they (and his coach) failed to mention that it was in the very back of a huge industrial park, about a quarter of a mile from the road.) Poor kid had spent 2 and a quarter hours getting to a place that should have only taken him 45 minutes to reach. His ride home was completely uneventful.

I've been doing a whole lot of praying for that kid this week.

8. I'm going to state right here, (which is probably jinxing myself but I'm doing it anyway) that the teen years are going very well. Before I had teens, I heard the warnings and the grumbles about how hard the teen years are. I believed them, for no other reason than I know what I was like as a teen. I'm happy to say, my teens have been pretty easy on me thus far.

9. I rarely include him on this list, but it's not for lack of appreciation. Bryan should be on this list each and every week. He washes the dishes every night. He holds my hand whenever we actually get to sit next to each other (like at church or kids' games). He does whatever he can to make my life easier. And he makes me laugh each and every day. Many days it's a full on belly laugh that makes my stomach hurt and my eyes cry.

10. Kids are exhausting a lot of the time. Much of the exhaustion comes from the constant noise. So much noise. The singing, the bickering, the questions. Oh the questions. Especially from Cuckoo. That kid never, ever stops talking and asking questions. Sometimes I really want to tune him out, but I know that if I do, I'll miss some gems of observations and twists of thought. For example, today he was asking about a man who was panhandling on the corner. The man had one of his pants legs rolled up to show that he had an artificial leg. Cuckoo saw it, of course, and asked about it.

We had a little discussion about what it was, why he had one, and how it worked. I thought we were done. Moving on to another topic. And then he came out with the reason adults should do their best to never, ever tune kids out.

"How does he attach it to his foot?"

It may be Friday, but the whirlwind will continue. In the morning, I will be heading off with three kids for a 3-day volleyball tournament in Chicago. I'll be doing my best to getting around to all of you who link up with us. Reading about what makes people happy always gives my mood a boost.