There Are Some Odd Days on the Calendar

When I was 16, my mom's husband was transferred to a different state. He moved several months before she did, which left two cars in Ohio that needed to be moved to Kentucky, and only one adult to do it. I became the second driver.

All I had to do was follow my mom for 6 hours on the freeway. It really wasn't all that difficult.

We came across construction, and there was one serious traffic jam. One car cut in front of me, getting between my mom and me. Then another. Those cars let others in. More people cut in. Within minutes, my mom was completely out of sight. I had no idea where she was.

There was no such thing as cell phones.

We had no navigational systems.

Shoot, I didn't even have any information about our final destination besides "somewhere in Louisville".

For the first time in my life, I was in one real, major panic.

Of course, these days, there would be no panicking in such a situation. Cell phones and navigational systems have taken away these fun rites of passage.

I don't get whipped about much, but in the right circumstances, I can be thrown into a panic in the blink of an eye. Just like I was back on that freeway when I was 16.

According to Lisa and Rabia it is World Panic Day, which cracks me up. Who comes up with these things? And how should one celebrate such a day?

I guess, as a blogger, you make a list. I am joining in with their Tuesday 10 and listing the things that make me panic.

1. Being unable to find a child where I expected him to be, including, but not limited to, the back seat of the van. Thankfully, these moments never last more than a minute, but those are the longest minutes of my life.

2. That feeling when I'm in public and my feminine protection isn't protecting like it should. It is quite difficult to be nonchalant so as not to attract attention while at the same time wanting to scream, "For the love of all that is holy, where is the closest bathroom?!?!"

3. Looking out the window and seeing a pig in the yard. Really, any time a pig gets loose.is a good time to panic. That's a whole lot of money running around all willy nilly like the world outside it's pen is a safe place to be.

4. When Bryan is out of town overnight, hearing an unfamiliar sound coming from downstairs. These are the nights I rue the day I ever watched a scary movie. Or the morning news.

5. Being 20 minutes from home and thinking, "Did I turn the stove off?"

6. Being 15 minutes from home and realizing I left my phone on the kitchen counter.

7. Walking down our wooden staircase, that moment when my foot slips and I go down. In those few milliseconds of being airborne, I flip out and pray that I don't hit my head and die. No joke. That has always been one of my biggest fears. I would fall and die and my little kids would be home all by themselves until Bryan got home. Even though my kids are now plenty old enough to call for help, the thought still flies through my brain before my butt hits the ground.

8. Preparing a meal, I knock a sharp knife off the counter. Thankfully, my feet have always been fast enough to dodge it and avoid the horrific bloody mess my brain envisions during that second it takes the knife to fall.

9. When one of my kids falls backwards off of a tall slide, landing on his back. I totally forget to assess the situation to see if he can move on his own before snatching him up and holding him close. It's only happened once, and I don't ever need to see that again.

10. When it gets late, late, late, and I need to go to bed, but I HAVE TO FINISH THE POST because I won't have time to write it in the morning and if it isn't done in the morning it won't get done in time to put it in the link-up and I'm not about to waste all this time I put into writing the first 9 things on the list!

To ease your mind, I'll let you know how the driving to Kentucky fiasco ended up. With tears in my eyes, I just pulled off the next exit. I figured I'd just sit and wait for her to find me.

My mom got off at the same exit.

We were reunited within 10 minutes.

You turn. What makes your blood start pumping and horrible thoughts race through your head?

Make it a lovely one. 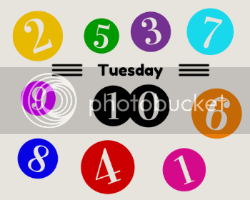