The Good, The Bad, the Repercussions of the Monday from H-E-double hockey sticks

Remember a month ago when I had that awful Monday which took me three days to explain?  (If not, go here, here, and here for the stories.)  I have some updates for you.

The Van:
Both the van's anti-lock brake system and the sensors on the back to alert me of any objects behind the gigantic 12-passenger I drive were ripped apart by the dogs and fixed by the car people.  Since then, both fixes have been tested with different degrees of success.

A person pulled out in front of me, and I slammed on the brakes.  Anti-lock system?  Check.

On a rainy evening, I backed out of a parking space.  The sensors did alert me to the fact that an object was behind the van.  Unfortunately, the alert didn't come until I had already hit that object.  The object happened to be another vehicle.  The blasted thing never showed up in any of the three mirrors.  Did I mention it was raining when this happened?  Kinda hard to leave a note on the windshield in the rain.  So, I grabbed a plastic bag from the van (I had bought something at the store to which this parking lot belonged.), a piece of his taillight off the ground, and a note I had written with my number on it.  The bag and its contents were then put on the windshield.  Two whole days later I got a call from the owner.  I wasn't home, so he left a message.  He sounds reasonable, so this should work out fine.  Although, I can't say the same about the dealership who "fixed" my van.  We'll see. 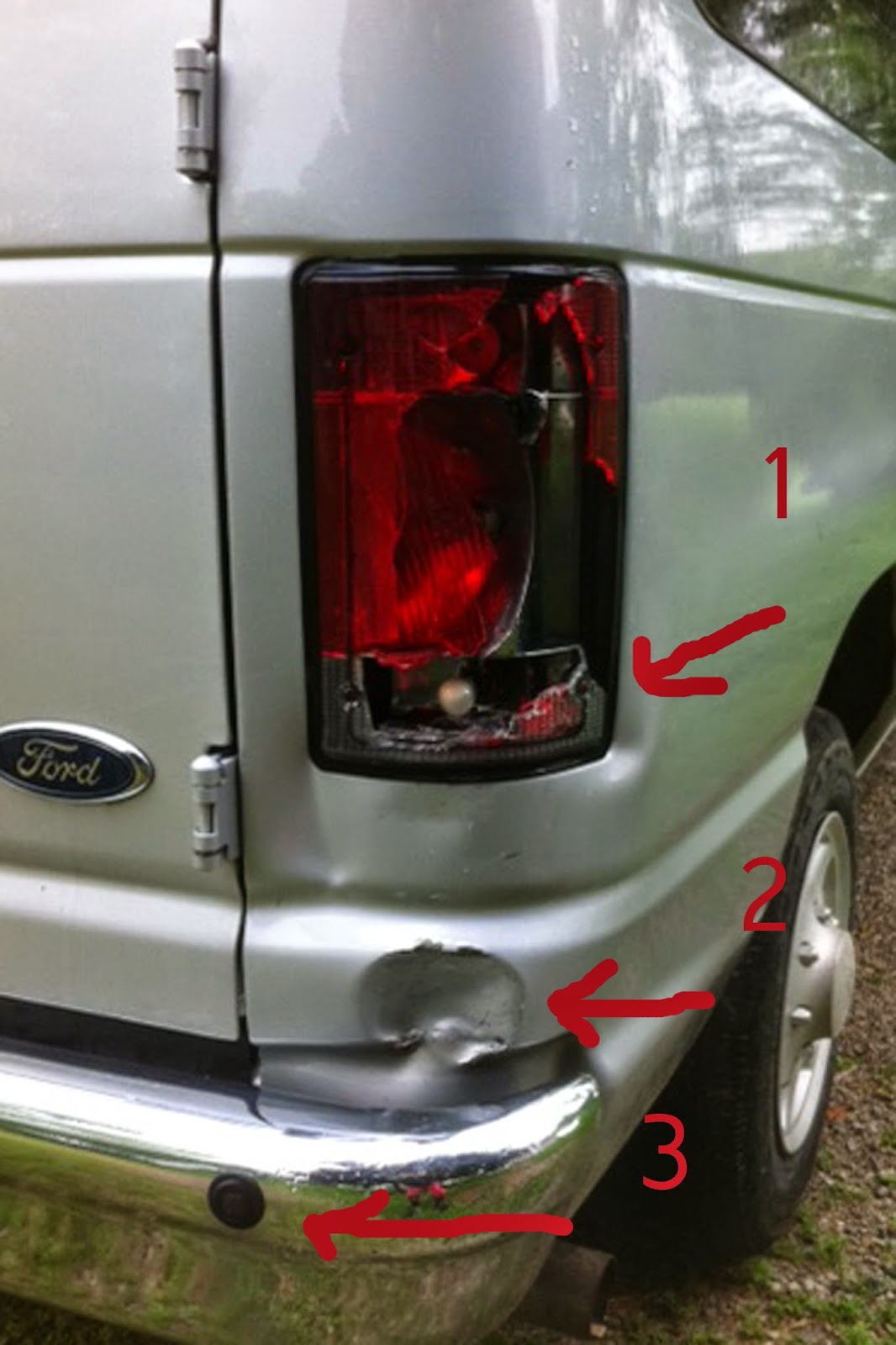 I had my appointment with the surgeon, and we will be good to go when I get back from England.  I am increasingly astounded by how much I can do in such a short time. I'm doing squats and leg presses with actual weights.  I can ride the stationary bike (no resistance yet) for as long as I want.  I'm walking without a limp and I'm not even wearing a brace.  I've even been able to go up and down stairs already.  (I will say that while I can do all of these things, some of them still come with some real pain.)

The surgeon said the time to schedule the surgery is when I'm at a point where I'm wondering why I'm having surgery at all.  Almost there.  My leg extension is at 1 degree and when I bend my leg I can get it to 128 degrees.  135 is my goal.  (Those boring sentences were mainly for Zoe and those who have had knee problems in the past.  Sorry to those of you who don't fall into those categories.)

I'm told that after surgery, I need to prepare to do absolutely nothing for 2 weeks.  While I will be able to walk and get around after that, it will be up to 10 months before I'm cleared to play sports or any other rigorous activity.  Like chasing escaped pigs.

Ah, the poor pigs.  I am the main caretaker of the pigs.  I am the only person in the family who pays close enough attention to them to know if something isn't quite right.  With this injury, there was no way I was going to be able to get down to the barn without causing myself lots of pain and anguish until just a few days ago.  Things most certainly weren't good.

The littlest pig didn't look like he'd gained a pound since we got him.  There was evidence of diarrhea in the barn.  It didn't seem as if they were eating all that much.

I told Bryan that they were in trouble and would need another shot. (It should have been done a few days after the first, but with my injury, that didn't happen.  I kept getting reports that they were doing better, everyone was eating and drinking, and thought all was well.) I was smart enough to know that I couldn't be in there to help.  There was just too much chance that one would plow into my bad knee.  Over the next two days, Bryan and the big kids were never home together before dark.  A delay of two days was too much for the littlest pig.  Phoenix came up from feeding them yesterday to tell me it had died.

I guess the only positive out of this entire thing is that, thanks to my knee, I didn't have to do the disposing of the dead pig.

It was only about 40-50 pounds, so Phoenix decided he was just going to drag it out to the back field.  Being so tall, that hurt his back, so I enlisted Giant to help carry it by grabbing on to a leg. 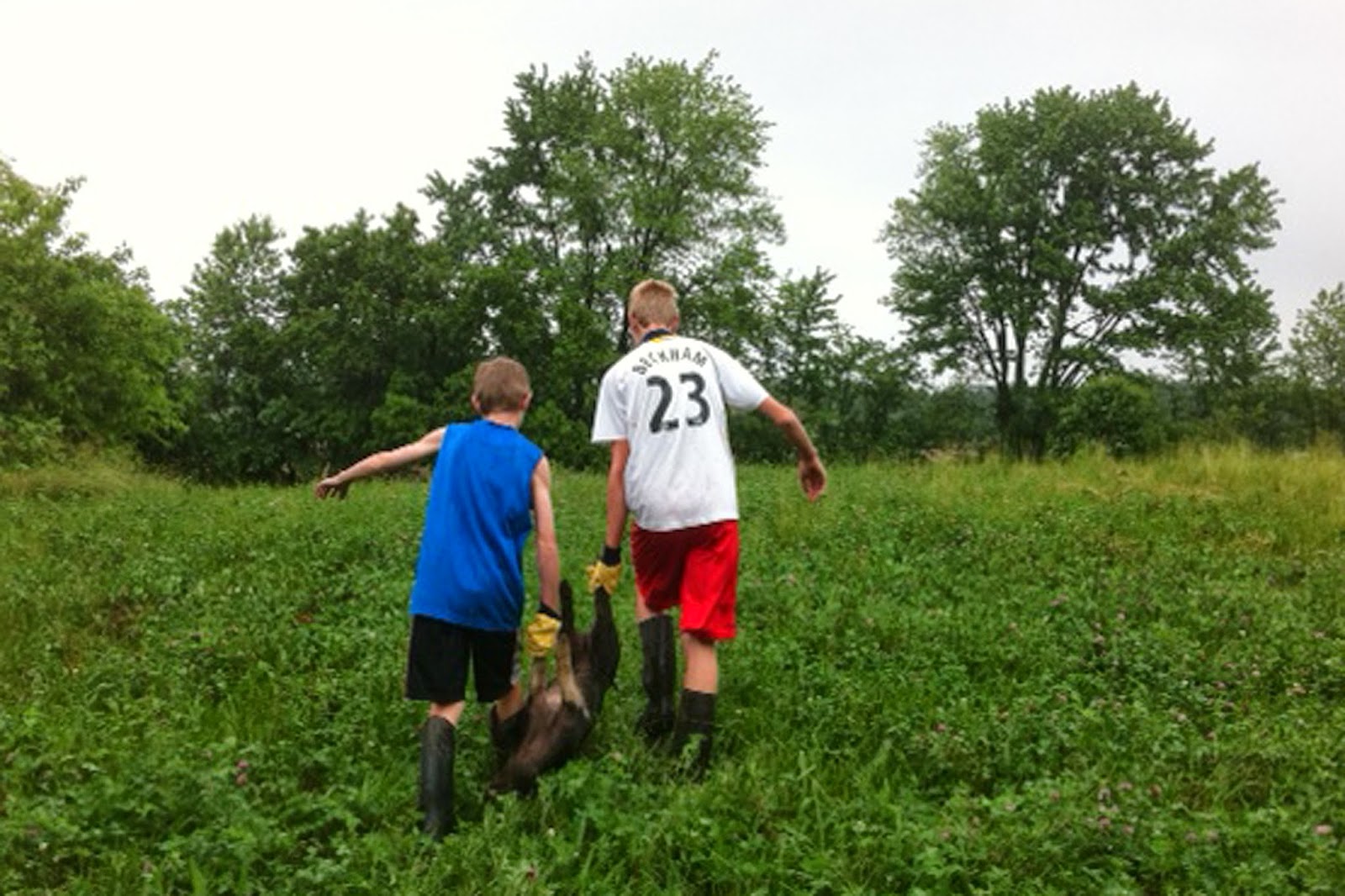 And THAT is the last post I will do about the awful Monday that was.

Unless, of course, something else happens.

How likely is that?