The First of Many Posts About Our Trip, TToT #54

I have until Cuckoo finishes a game with Bryan to get this done, so onward to the thankfuls!

1.  We made it to England to begin with.  When I got to the airport at 4:00am last Wednesday, the computer wouldn't list my flight for check-in.  I asked a teller what was going on and was told, "That flight was cancelled.  Didn't you get a notice?"  NO I DIDN'T GET A NOTICE!!!  WOULD I BE HERE IF I DID?!?!?  The panic set in, and the teller didn't do much to ease it.  Finally, he found a flight that left 15 minutes before my original one, but didn't arrive in London until an our later.  And THEN, as I waited in the terminal, a notice came over the loudspeaker.  "We regret to inform you that all flights in and out of Indy have been postponed for an undetermined amount of time.  There is a fire in the control tower, and it is being evacuated."  It was a bit of a stressful, sickening morning, but I did manage to get to England.

But THEN, Bryan had to get to London three days later.  He also had some problems.  His flight left very late, thanks to "too much luggage on the plane", which prompted this text in the wee hours of Friday night in London.

"Not good.  Missed connection.  Looks like I won't get in until Sunday morning at 7:00am.  Now flying to Houston."

I almost started crying right then and there.

Good news:  He didn't have to fly through Houston.  Bad news:  He got in several hours later than he was supposed to and his luggage didn't get there at all that day.  Poor guy had to wear the same clothes he wore to work on Friday all the way until Sunday night.

But, we got there safely and at about the right time.  The hassle and headaches were forgotten as soon as we hugged at the airport.

2.  We made it back alive.  Before we left, I was afraid of the plane going down and leaving our children orphans.  While that was still a worry, it was moved farther down the fear of dying list as the vacation progressed.  First, I made it through being a passenger in a car in England traffic.  While Lizzi was a lovely driver, my American friend living in Windsor was not.  Holy cow.  Roundabouts are popping up all over Indiana, but the behemoths of England put our roundabouts to shame.  Ours are organized delights.  One might even yell "WEEEEE!" while driving around one.  Not so in England.  One is more likely to yell "MOMMY!  SAVE ME!"  as the car dodges and weaves to avoid being hit while simultaneously trying to get off the blasted thing.  But then we got to Paris.  Dying was a real, in your face possibility.  The traffic there is bonkers.  There are no lanes.  There is no rhyme or reason.  And it's not just cars one has to avoid.  There are motorcycles everywhere, and they move faster and dodgier.  I can't tell you how many times I hollered, "We're going to die!" as we crossed a street. 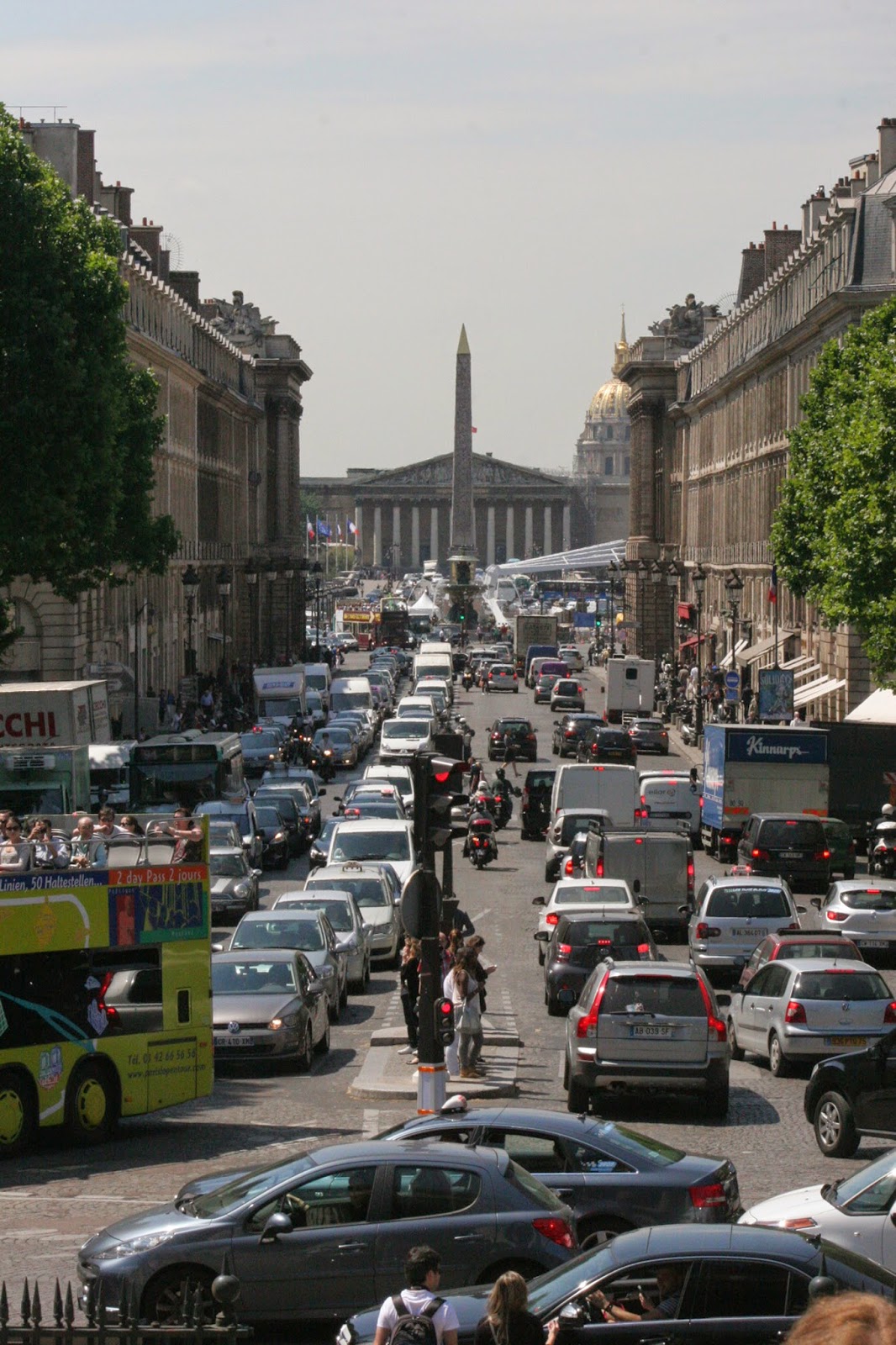 3.  I was able to have lots of fun visiting my friend Carissa and her family.  She took me to the Royal Ascot where I got to see the queen and Prince Harry up close and personal.


And the next day we headed to Windsor.  While the queen was there.  I was in the castle with her. 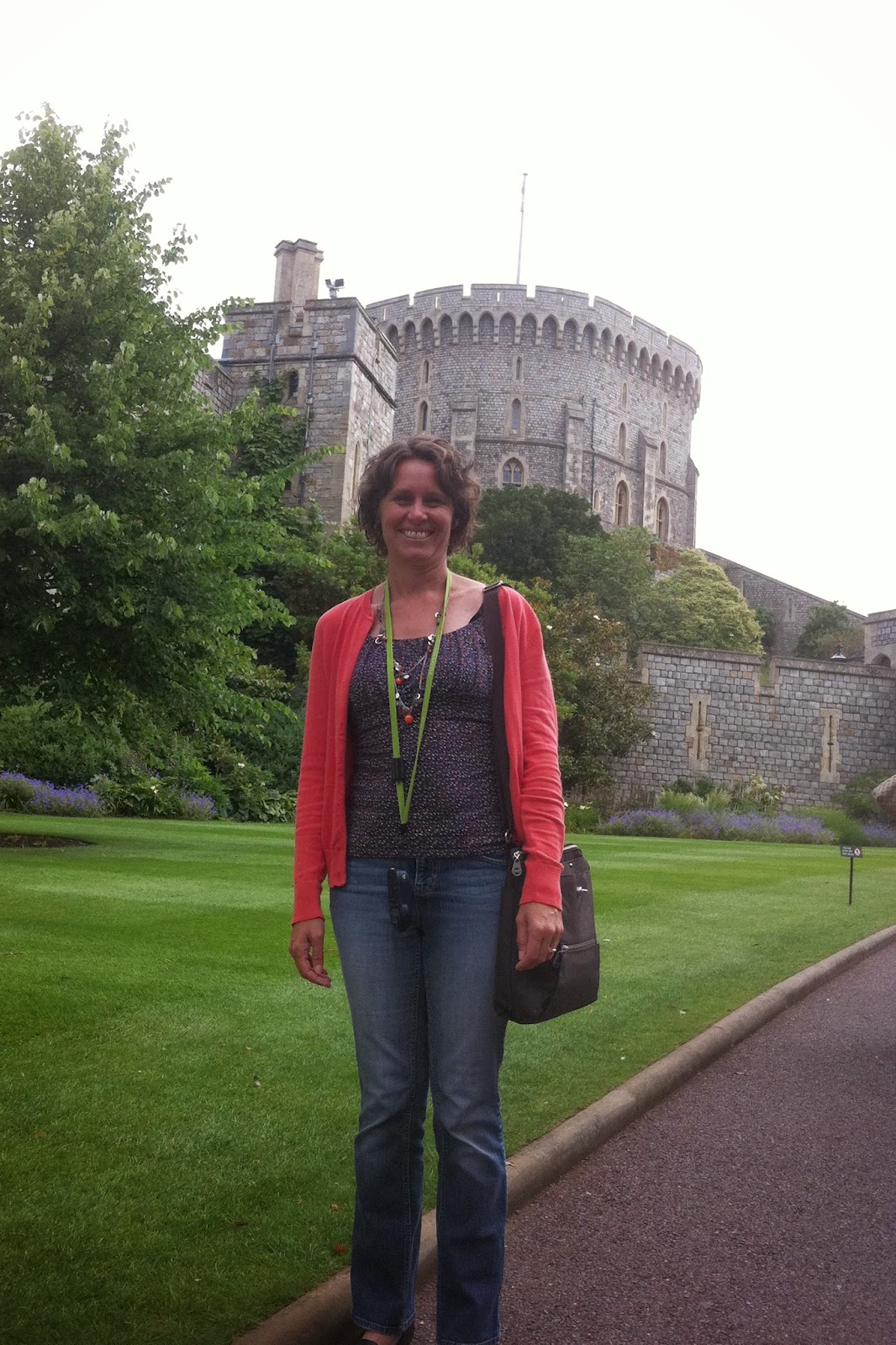 4.  I GOT TO MEET LIZZI!!!!  After almost 2 years of talking through the internet and becoming friends, we finally got to meet face-to-face.  It was so much fun!  She was a fantastic hostess.  I knew she was good when I got to her apartment, and there on my bed was a pile of candy.  M&Ms and Butterfingers to be exact.  She knows me.  :)

You can read all about our visit on her blog, but I want to point out a few other details.  First off, Lizzi can make some yummy food!  The scones (with clotted cream and strawberry jam) and the Eaton mess she made were delicious!!  I ate seconds of everything.  Her mother is a whiz with a wisk.  Lizzi and I whisked until our arms couldn't work anymore, yet the whipped cream just wouldn't set.  Her mom took over for all of about 20 seconds and had lovely, fluffy goodness.  Lizzi's hospitality skills were clearly handed down from her family, as her mom and aunt were wonderful tea hostesses.  The garden was gorgeous.  At one point, her aunt came out with a big bag of England souveniers for me to take back for my kids.  The weather was fantastic, and the company made the entire afternoon perfectly perfect in every way.


Basically, our visit couldn't have been any better.  I loved every minute of the time I got to spend with her.

These photos are taking forever to download, so my time is running really short.  Gotta finish up quick...

5.  My knee held up through the entire trip.  It was swollen, and by the end of the week it was starting to really bother me, but considering the massive lengths we walked, I was very happy with how it all worked out.

6.  The weather was fantastic for my entire 10 days in Europe.  Despite all the rumors I heard about lack of sun, Vitamin D deficiency, and rain in England, we had not a drop fall on our heads.  We both actually got a bit of sunburn.  We wore shorts every day and never needed more than a light sweater in the evenings.

7.  The kids had a great time while we were gone.  They had sleepovers and movies and camp and playgrounds.  They hardly even missed us.

8.  We came home to a clean house.  Considering we had been up for 22 hours straight for the trip home, walking in to a house that needed nothing done was about the best gift I could have gotten.

9.  I said it before I left, and I'll say it again.  I'm so very grateful to still have my mom, who is healthy enough and willing to come stay with my kids.  I can trust her completely, and I know they will be well cared for.  My gratefulness only increases when I hear that a pig died while we were gone, and despite her strong dislike for even live pigs, she helped Buttercup drag the dead one out of the pen.  (I am very disappointed to hear that no one got any photos of the situation.  Very disappointed indeed.)

10.  I will forever be grateful for Bryan's wonderful attitude while traveling.  He is so much fun, and we had a fantastic anniversary trip full of laughter, good food, and new experiences.  You'll hear all about them and see lots of photos in the coming days.  :)

Alright, Friends, it is your turn.  What good things happened in your lives while I was gone?