There is no time to expound on the significance of this, as I've got a thankful list to get done and not much time to do it.  I shall save it for another day.  Just a warning...it may not be until my 600th post.

On to the Polar Vortex Edition of the TToT!

I love it when we get to pull out new, impressive-sounding terms for "weather events".  And this one is especially good, because by the nature of the word, you have to say it slowly and enunciate, or you will accidentally say "polar voltex" and be ridiculed by all who hear you.  Saying it slowly and enunciating every syllable makes it sound even more intimidating, don't you think?  Even more so when you say it with a deep voice and a serious face.

Since you all know me as the Winter Wimp when it comes to cold weather, you will probably be surprised to hear that I actually enjoyed the Vortex.  While there were some learning experiences to go with just about every good thing, there were lots of good things.

The Thankful:  Sunshine.  After the snow on Sunday, we got two days of beautiful sunshine.  Sparkly snow blinking in the sun is one of the prettiest scenes in the world. 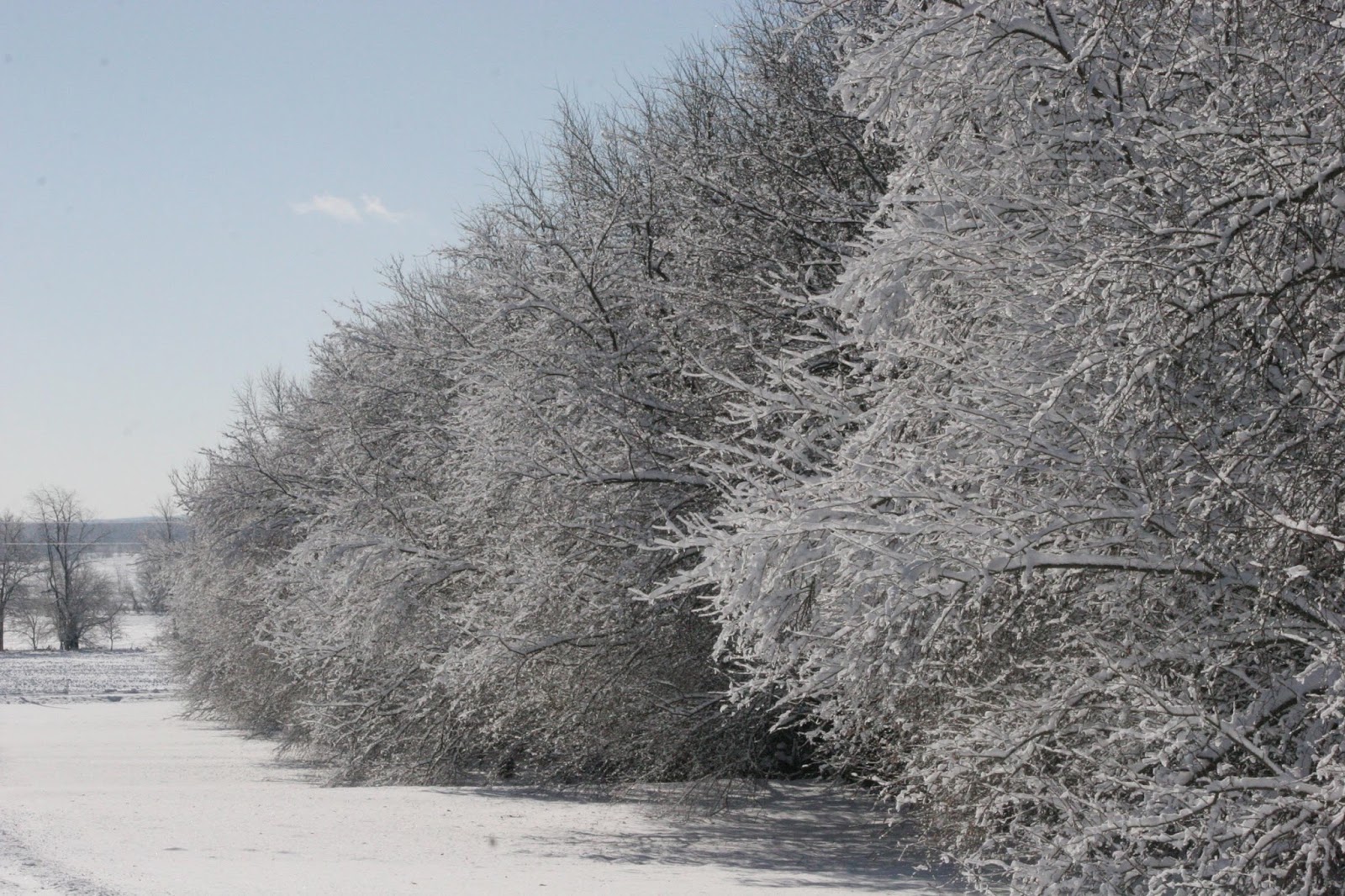 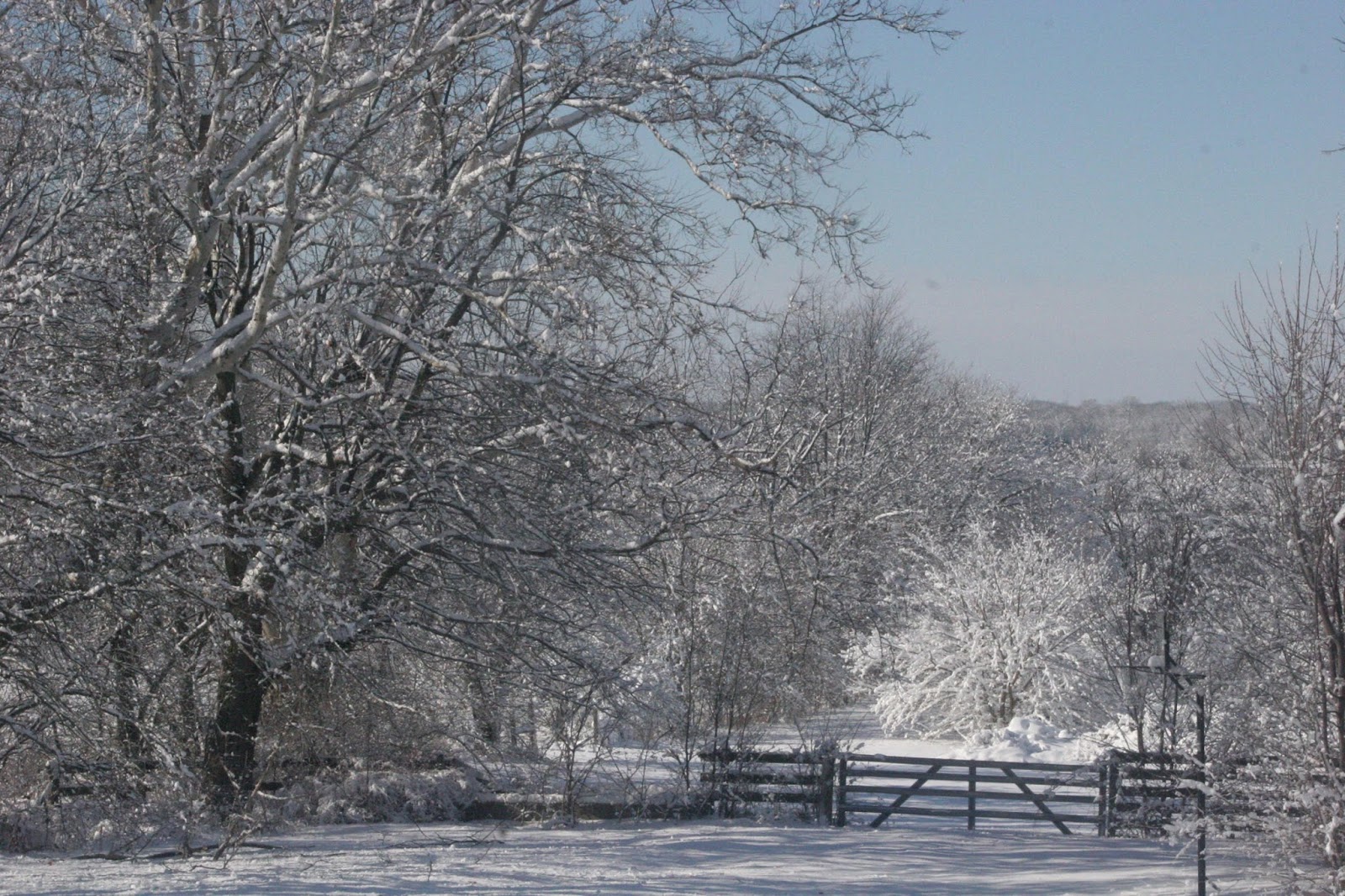 I'm sorry these photos don't do the gorgeousness of the day justice.  It was too cold to take my camera outside, so I had to be content with photos from the windows.  Which was difficult, considering most of our windows looked like this: 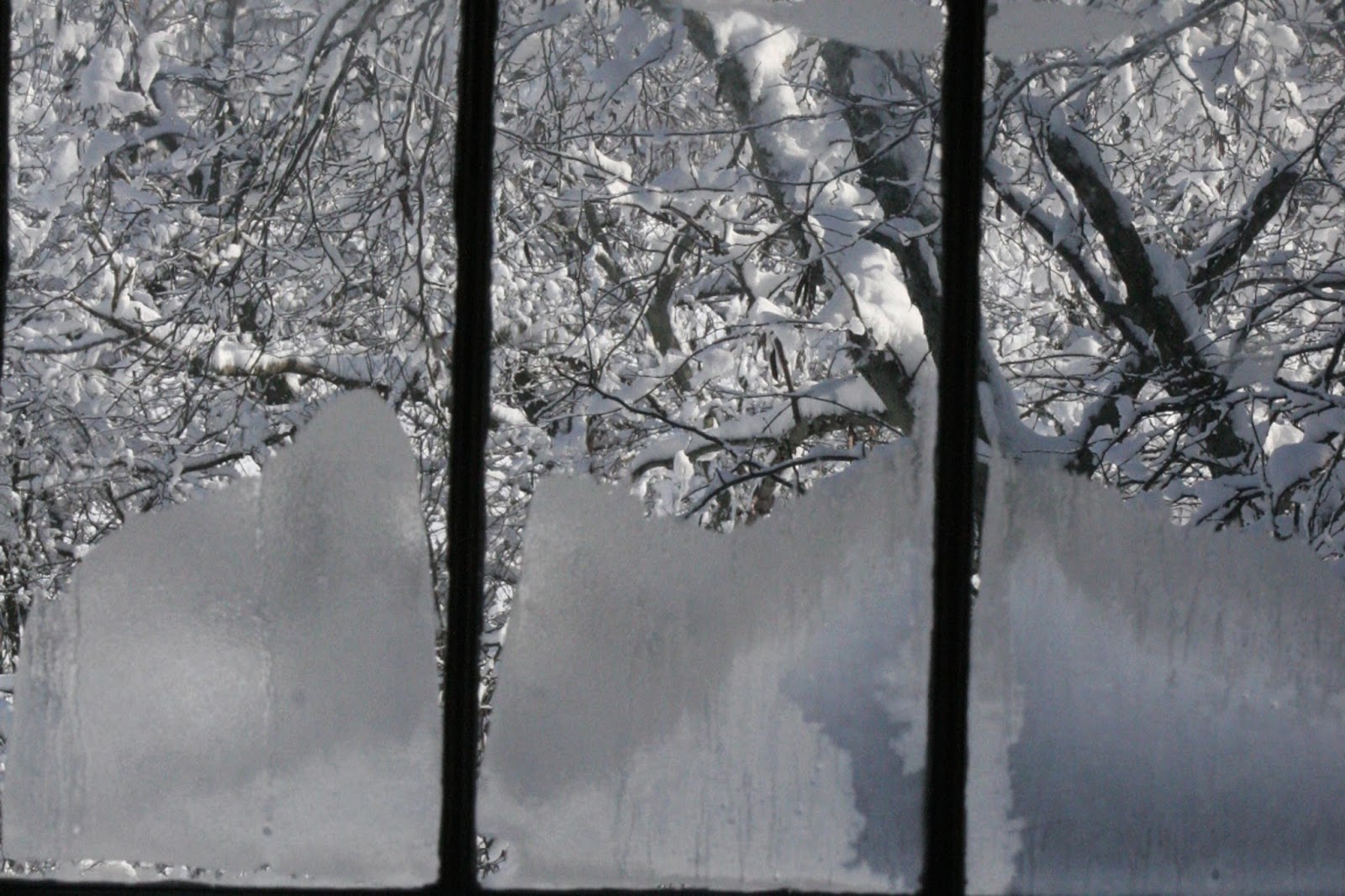 or worse.  What you see there is ice.  On the INSIDE of our windows.

The Lesson:  Get some plexiglass on the outside of the windows.  The windows that already have some fared much better.

The Thankful:  Going with the sunshine again.  With temperatures in the -40 range, the sun was very helpful for the animals.  The chicken coop has windows, so the sun shining in helps warm them up.  The dogs also enjoyed basking in the sun in places which were blocked by the wind.

The Lesson:  Sunshine and Vortexes create crazy things.  I looked out the back window to the coop, and saw something I've never seen before.  See if you can spot it... 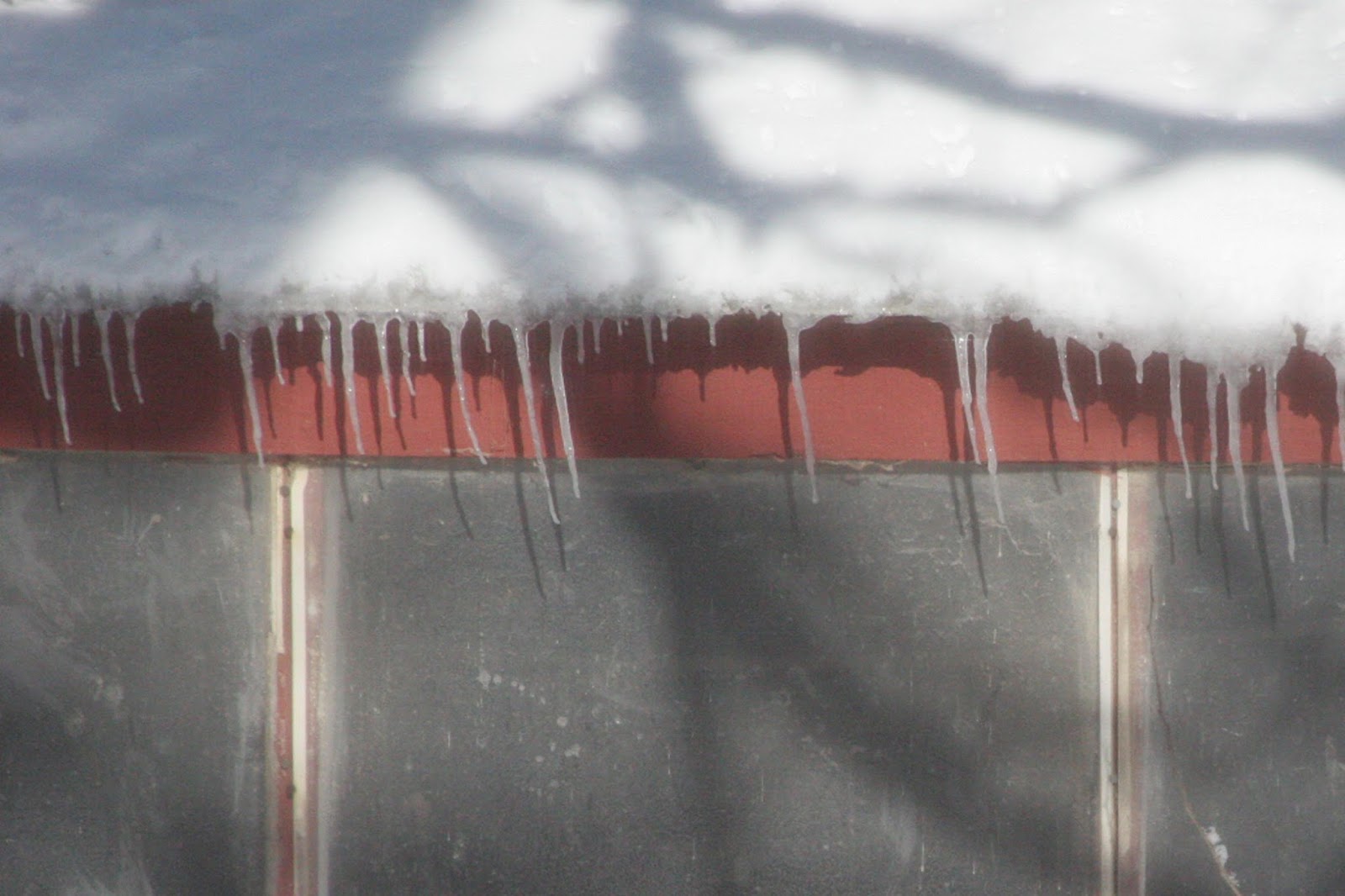 It's not because the photo is crooked.  The sun melted some snow, and the wind was so ferocious that it caused the icicles to grow off-center!

The Thankful:  I was warm.  It seems the temperature of the inside of my house is not my problem.  The problem is the having to go in and out of the house several times each day.  For 5 days I stayed in pajamas and my fuzzy pink robe, and I was warm.
The Lesson:  Wearing your robe all day every day may give people the impression that you haven't showered in 5 days.  I will have you know, under that robe was a new pair of pajamas and clean underwear at least every other day!

The Thankful:  I didn't drive anywhere for 5 days.  My van sat in the driveway, looking like this: 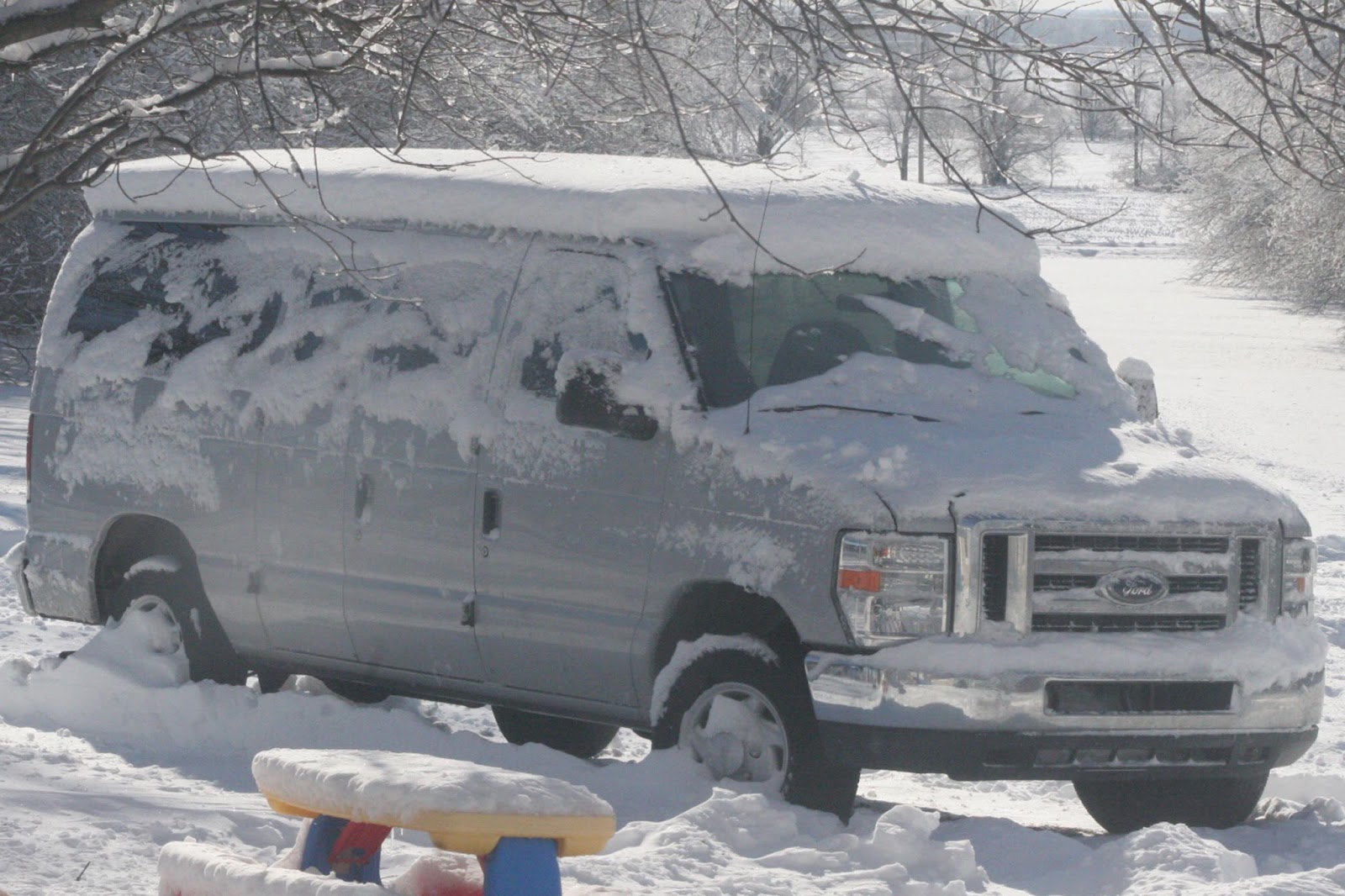 The Lesson:  Scrape ALL the snow off of your vehicle before you drive.  On the day I finally had to drive, Phoenix cleaned the car off for me.  He did not brush off the snow on the top of the van.  As we drove down the driveway I said, "It's gonna be funny to watch all that snow fall off the back when we pick up speed".  And then we forgot about it.  Until 20 minutes later when I stopped to make a left-hand turn and all that snow came sliding to the front of the car.  I was sitting in the middle of a 5-lane freeway completely unable to see through the foot of snow covering my windshield.

The Thankful:  For 5 days, we got to play as many games as we wanted.  The kids received a new game for Christmas (Settlers of Catan), and it got lots of use this week.  Cuckoo discovered he loves Monopoly, so we played many games of the SpongeBob version.  Scrabble, Yahtzee, African Adventures, and Who Knew? were popular, too.

The Lesson:  When you play this many games with kids, they will get really good at them.  This week, I lost Scrabble to an 11 year old (Giant), Monopoly to a 4 year old (Cuckoo) and Catan to a 5 year old.  And I didn't "let" them win.  They have to earn their wins.  Humble is my word for the week.

The Thankful:  Minecraft.  I can't believe I'm saying it, but I'm thankful for a video game.  As the week went on, the kids' patience with each other started to wear thin.  And the day I was sick and couldn't play too many games worried me.  Until I let them play Minecraft.  The big kids played on their iPods, and the little kids took turns with my iPad.  All 6 got comfortable in the boys' room and played this interactive game together.  Laughter poured from the room all afternoon.

The Lesson:  When kids are allowed to play an unlimited amount of video games for two days, they don't want to give it up.  Not too big of a deal with the big kids.  The little ones, though, have not been happy.

The Thankful:  Lots and lots of good meals.  With nowhere to go, I had all the time in the world to cook for my family.  We had huge breakfasts and dinners every day.  When you raise your own meat and can veggies from your garden, there's plenty of food to fill your bellies, even if you can't get to a store for a week.

The Lesson:  Kids love snowmen pancakes to go with the theme of snow days. 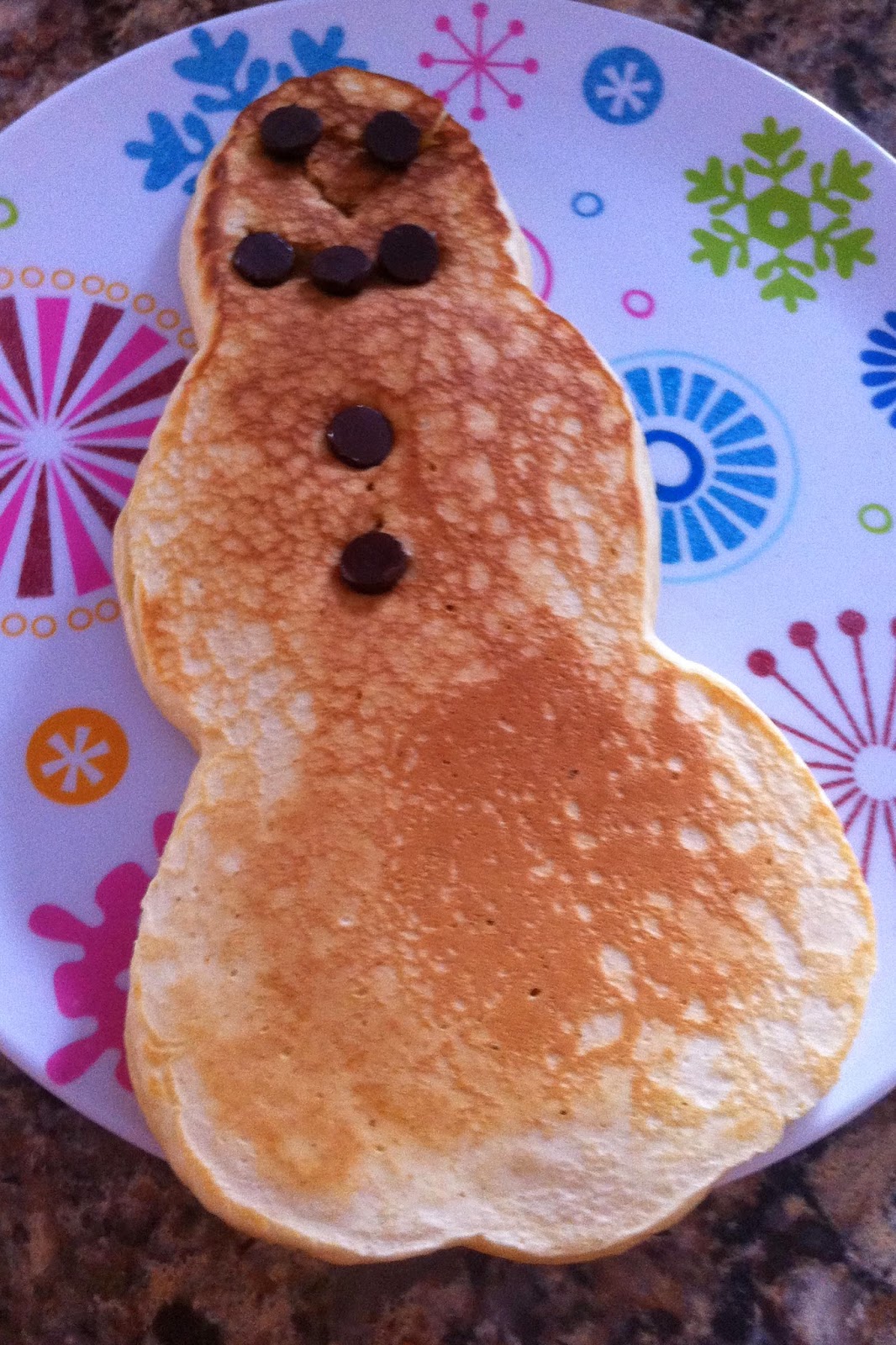 Just be careful not to make the snowmen too much bigger than your spatula. 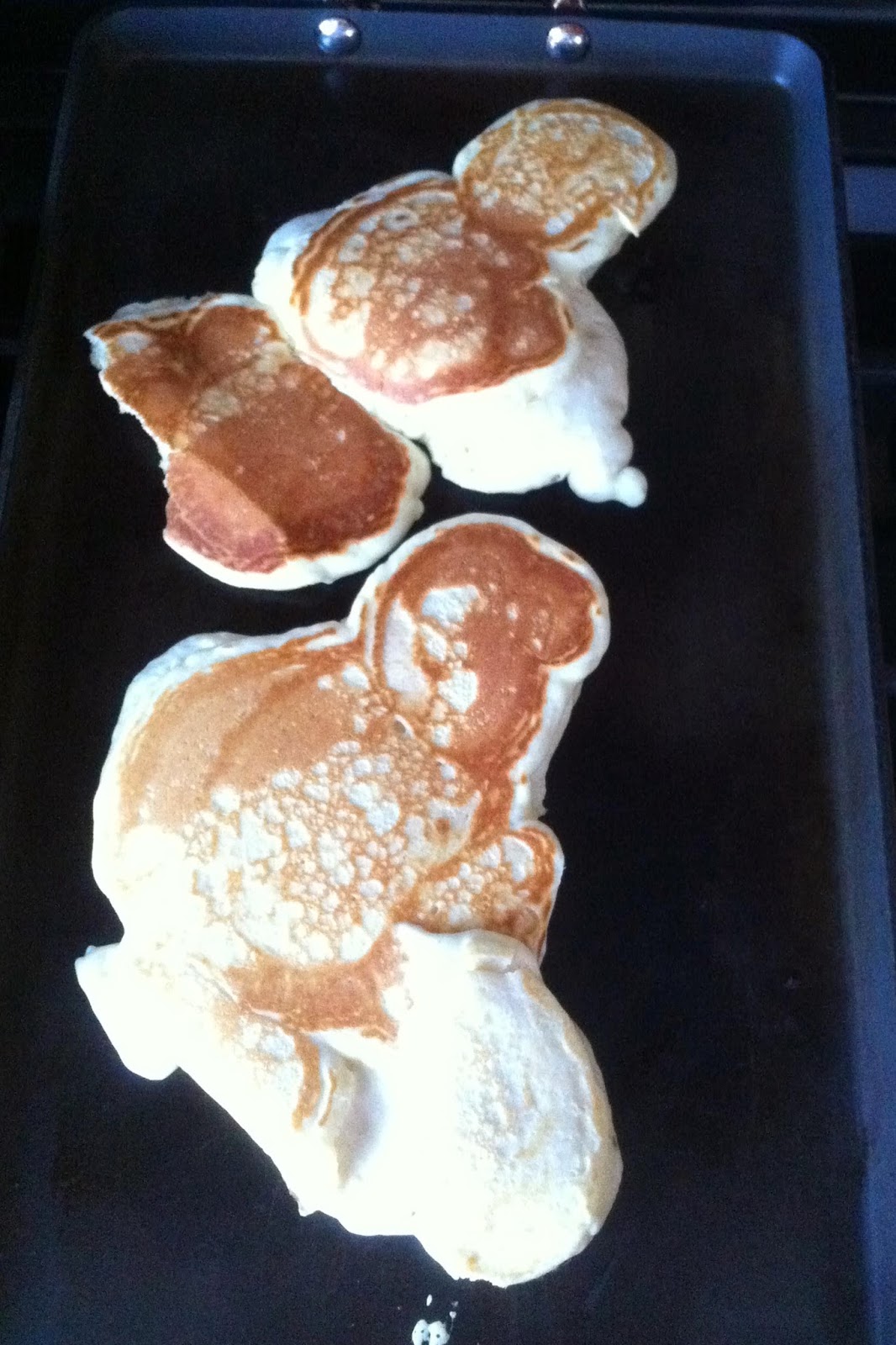 The Thankful:  After a slow start, the chickens are laying eggs like crazy.  It seems our birds never got the memo, so they don't know that chickens normally slow down or stop laying eggs during the winter.  Out of now 27 chickens (Read yesterday's post if you don't know why I said "now".) we are getting an average of 18 eggs per day.

The Lesson:  Plan for a Polar Vortex.  Most of our customers come from school, but with school out for Christmas and everyone trapped for 5 days, the eggs have piled up.  We've been eating lots and lots of eggs, but still have 18 dozen eggs in our fridge.  Really should have done something about this before the snow hit.

The Thankful:  If I had to have a cold, this was the time to have it.  If it would have been over Christmas, I wouldn't have been able to visit with my grandma.  With school being out, I was able to actually sit on the couch and let my body take care of the illness.  The cold was gone in two days.

The Thankful:  An organized game closet, basement, and toy box.  Actually, the toy box is gone.  Out of our living room.  Finally.  The kids and COW did a great job organizing everything and making me a very happy camper.  (I was cooking while they did all of it.)

The Lesson:  Send Cuckoo away when organizing toys.  Buttercup was given the job of cleaning out the toy box, including putting outgrown toys in a Goodwill bag.  Cuckoo couldn't handle it, and whenever she wasn't looking, he'd grab something out of the bag or out of the toy box and run.  She spent half her time collecting things from him while we all laughed and laughed.  (She was laughing, too, for most of it.  I finally had to step in and distract Cuckoo.)

All in all, it was a great week, with so much laughter and fun.

Now, it's your turn.  What made you happy this week?  Learn anything while having fun?

We have a new co-host!!!  Sandy has agreed to join us after Melissa, sadly, had to step down from the position.  Be sure to click over and say hi!

Your hosts
A Fly on our (Chicken Coop) Wall, Considerings, Finding Ninee, Getting Literal, I can say mama, I Want Backsies, Mother of Imperfection, Rewritten, Thankful Me, The Wakefield Doctrine