Last night, I came up with a very creative, outside-the-box idea for the thankful hop this weekend.  I'll still do part of it, so I won't tell you the entire idea, but part of it entailed videos from around the farm.  Cuckoo and I began filming this morning.  For the chickens, I started with the phone, then he took over at the end.  When we moved to the pigs, I let him film the entire thing. It had rained all morning, and I didn't want to drop my phone in the mud with the pigs.

Backstory:  Each time I feed the pigs, I throw them a tomato or apple treat, simply to get them away from the door, so I can get in.  Not one time, in 5 years of raising pigs, have I ever locked the door behind me.  As soon as I'm in the fence, they are all practically knocking me over trying to get their food.

Comments about the video:
1.  Keep in mind, Cuckoo (4 years old) was the videographer.  He was the only one home.  The moment the pig got loose, he got scared.  Most of the video is really for the benefit of the audio.  Turn the volume up to hear my screams and the pig grunts in the background.

3.  You may hear me remind Cuckoo a few times that he had the video on.  It was in no way because I wanted this video for the blog, but completely because I didn't want him to get scared and throw the phone at the pig.

So why did the video end?

Because after 4 more minutes of dead video (which I cut out), when I was out in our 2 acre field chasing down a pig, Cuckoo accidentally turned the video off.  Sorry to say, there is no documentation of my heroic capture of the loose hog.

However, I do have illustrations.

Here's how it all went down...

I realized I needed to shore up the holes in the area where the pig and I went.  (Towards the end of the video, you see me (upside down) in the pen again.  I am trying to find a gate I can carry by myself.)

While I was in the pen, the pig found his way through to the wide open, 2 acre field.  (Granted, the opening is quite large and walking through it is really the only logical thing for a pig to do, if you are using pig logic.) 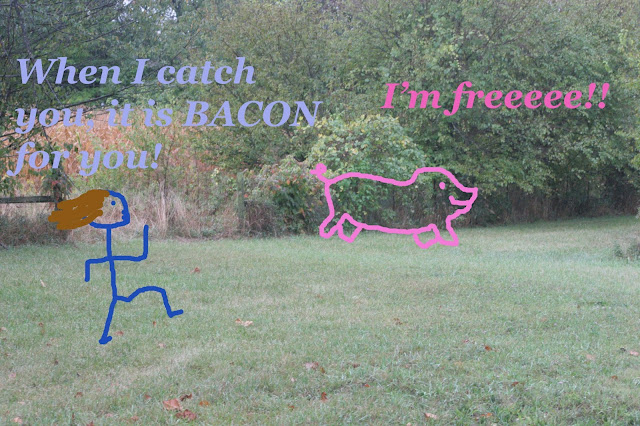 I tried chasing and corralling for a few minutes, but my attempts were futile.  And exhausting.  There was too much room, so he could easily get around me.  I had no rope or anything to actually hold onto him, so catching him was not an option.  The more I tried to get him going in the right direction, the farther from the pen he went.  Adding to the long list of problems were the Lupus flare that kicked in yesterday, the gigantic boots I was wearing, and the sprained ankle I retwisted in this little escapade.

I needed to be smarter, not faster, than that blasted pig.

I stopped chasing and just stood in the one opening I knew I had to prevent him from taking.  The one spot in the entire field that is not fenced off leads directly into 10 acres of corn field.  If he went there, I decided I was going to give him up for dead.  Donating him to the coyotes.  Washing my hands of him.  Keeping him out was important.

The plan worked, and he started to head back towards the barns.  I simply followed behind him.


I can't tell you how much I was wishing for at least a ghillie suit, if not a cane/flashlight/stun gun.

Finally, finally he made his way back to the area just outside the pen where I had the best chance of corralling him.  Of course, he went straight towards Cuckoo.

Did I mention (or did it come across in the video?) that Cuckoo loves pigs, but only if the pigs are on the other side of a fence?  When the pig came towards him, Cuckoo simply took off with my phone and kept on running until he got inside the house.  I didn't see a single glimpse of him after that.

I managed to get the exits blockaded while the runaway pig nana-nana-poo-pood the pigs still stuck on the inside of the pen.  It was no Fort Knox of redneck fencing, but it was enough to keep the pig from heading for the hills.  Well, for the corn.

All I had left to do was get him to walk to the gate, get around him to unlock and open the gate without spooking him off, and get him to walk through.  Oh, and do it without letting the other pigs out.

It was Roy who finally saved me.  He must have had a rest, because out of nowhere he began another barking frenzy.  The two penned pigs went to investigate, so I was able to open the gate.   I held it open, stretched out in order to kick the pig on the rump to turn him in the right direction, and in he walked.

As he passed by me, I swear I heard him say, "I am only going into this pen, because I'm full and could use a nap.  I am choosing to go in."  He then plopped down in a giant mud puddle.

I locked the gate and limped back to the house.  Cuckoo met me at the door.

Me:  Why did you leave me there by myself?

C:  Oh, I thought the dogs could help you.

C:  And I don't like the pigs out of their fence.

Me either, Babe.  Me either.

It just so happens that the FTSF sentence is I deserve a medal for...

I think we can all agree.  I deserve the "Caught a Pig All on Her Own Without Uttering One Single Cuss Word" medal.

*If you are having trouble with the video, go here.