TToT, No Number, Because We're On a Break. Remember?

All day Friday, I had the feeling I was missing something.  This whole "take a break" from the Ten Things of Thankful just didn't feel right.  I was mentally keeping track all week of the things that made me smile this week, but I had nothing to do with them.  There was no email from Lizzi, giving us the HTML to put into our posts this weekend.  There was no banter.  No bickering.  No jokes flying between the co-hosts.

I spoke with Lizzi a bit this evening, and told her I missed it.  I told her I was going to write one anyway, just because.

Before I could say, "I am thankful for", she was messaging me, telling me to reread her post for today.

Sweet lady that she is, she made up a new button.  It's the "Gone Renegade"  TToT!  No co-hosts.  Just a linkup for anyone who feels like I do, missing the writing of my gratefuls this week. 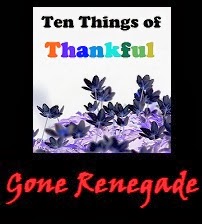 1.  I am thankful for the stack of gifts under the tree, which means my Christmas shopping is complete!  I can sit back and relax for the rest of this Advent and Christmas season.

2.  I am thankful for some fantastically warm weather that blew in today.  Sure, it's coming with so much rain I could use some webbed feet, but rain isn't snow.  (We are under a flood watch for the next two days.  If this were snow, we'd be snowed in for a week.)  And warm weather melts ice.  The first thing Cuckoo said this morning was, "The snow is all gone!"  Yes, Baby, praise the Lord, the snow is gone.

3.  I am over the moon thankful that I didn't have to back into the driveway this morning.  The whole driving backwards on an ice slide of death in the dark was getting really old.  Really, really old.  Today, I easily drove up and down the driveway going forward.

4.  I am thankful for helpful, kind teachers.  The half-day kindergarteners stayed all day today, since there was an early dismissal for the entire school, and it was Christmas party day.  That meant Turken got to pack a lunch.  He was extremely nervous about having to buy milk.  As in crying his full head off when I mentioned it this morning.  I told him Buttercup would show him how to do it before school.  He started to cry as she walked him through it this morning, and the preschool teacher noticed.  She calmed him by saying she would be eating in the lunchroom that day and would be happy to help him get his milk at lunch time.  He felt much better and was able to get his milk at lunch.

5.  I am thankful for Phoenix's learned study habits.  The boy has had to learn some seriously hard lessons this year, but he has learned.  He had finals this week, and did extremely well on all of them.  He is ending the semester on a positive note, and we're hoping the second semester will be much better for him.

6.  I am thankful for Christmas break.  Really, for any break from school.  We can do whatever we want whenever we want.  It makes me so happy.

7.  I am thankful for gigantic box stores like Meijer.  I do most of my Christmas shopping in smaller, specialized stores, but some things are better purchased at Meijer.  Stocking stuffers and generic things like cardstock are cheaper here.  I spent 2 hours there this afternoon finishing up all the last minute little things for this weekend.

8.  I am thankful for Christmas music.  It's all I've been listening to since Thanksgiving, and I have gotten the kids to love it, too.  Even when the music isn't on, Cuckoo, Turken, Giant, and Star can be counted on to be singing carols a capella.  Loud and sometimes lyrically correct.

9.  I am thankful for the Dollar Store.  We used to let the kids buy gifts for each other at the school's Christmas store put on by the PTO.  Unfortunately, they raised the price, and I just didn't want to keep spending that much money for stuff we can get at the dollar store.  It is so fun (and funny) to see the kids be all stealth-like through the store, making sure no one sees the gifts going into their baskets.  I especially like watching the little boys.  When one picks something up, I always ask who it is for and why he's picking it.  There is always a good, thoughtful reason for each purchase.  For example, when we first walked in the store, Cuckoo started straight for the sunglasses display, saying "I know what I'm going to get for you!" I have been wearing broken glasses for two weeks now.  One of the arms is completely gone, so the sunglasses sit completely crooked in all directions.  It annoys me to no end, but I haven't said much about them.  Cuckoo knew exactly what to buy for me.  (Unfortunately, I stopped him at the time, trying to keep the illusion of a surprise.  By the time Phoenix took Cuckoo to pick out my gift, Cuckoo had forgotten what he was going to get me.  I'm pretty sure I'm getting a fake flower instead.)

10.  I am thankful for preschoolers.  I only work in the preschool classroom for two hours a week, but those kids are so sweet.  I love having conversations with them as we work on the letter each week.  As I left on Tuesday, I was knocked over by the force of the hugs and wishes of a Merry Christmas.  I carried a boatload of goodies, as many of the kids had brought Christmas presents for me.  I don't know what I will be doing next year, but I'm glad to have the chance to work with these cute little people this year.

Feel free to tell me what made you happy this week!