How's this for a way to start the morning?  I went to bed early last night, so I could get up and make heart-shaped pancakes for the kids before school.  I know.  Great mom.  Whatever.  I set the alarm and fell asleep before my husband came to bed.  This morning I woke up on my own and found that he had changed the time back to our normal wake-up time, forgetting my big plans for the morning.  After punching him, I ran downstairs to try something else.  I only had nine minutes before he would be getting them up, so I made pancakes with red food coloring in them.  They turned into the most horrid looking pink I have ever seen.  I tried to make them look better by adding some perfectly sliced red strawberries to the plate.  All to no avail.  The kids came down, saw the pancakes, and gave the "What the heck is that?" look.  They actually said, "Are we supposed to eat those?"  I of course replied, "You most certainly are!  And you're gonna like it, too!"  So, for breakfast, my kids ate these: 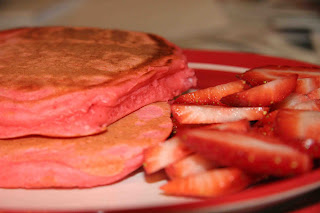 Can't wait to see how those come out later today.

All of this, remember, was my husband's fault.  Guess what dear hubby did for our children for Valentine's Day?  Took them out for doughnuts on the way to school.  Yup.  He makes me look bad, then makes himself the hero.  In the process, he just lost his Valentine's Day, I'll tell ya that!

We had a busy weekend.  First, our daughter had her skating show.  I love where she skates.  I didn't have to pay a dime extra for the show except for the $3 admission.  No fancy costume, no specific hairstyle like those crazy dance moms have to do.  Just a bunch of kids doing 30 second routines.  Although, I did have to get her there for practice at normal time, then be back again 3 and a half hours later.  Which was an hour and a half before the show started.  Oh, and it is crowded and cold for the whole thing.  Oh, and the announcing is quite long, and done by some poor guy who either a.) needs glasses, b.) had trouble reading a hand-written script, or c.) can't read.  But, at least I didn't have to pay anything. 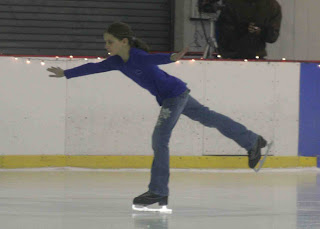 On Sunday, my husband had to make a cake with our 9 year old.  Hubby had to work the day of the scout cake auction last week and had promised our son that they could do it another day.  Sunday was that day.  The rules of the auction state that no female is allowed to help or even touch the cake when it is being made.  Yeah for me!  Not so much for them.  Neither of them have the experience that I do.  It was a great idea, but as the 9 year old said, "It doesn't really look like the picture I had in my head."  No honey.  It rarely does.
But, regardless of how it looked, it tasted darn good.  Except for the green icing.  It had one funky aftertaste. 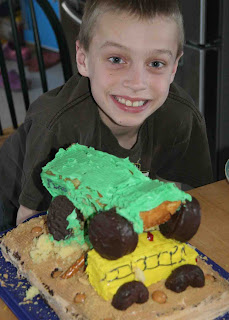 In case you are wondering, it's a monster truck crushing a school bus.  Our family has been known to enjoy a good monster truck rally or 2, or 3, or 4.