When we visit tourist attractions, Bryan and I don't talk much.  For one, we are nerds and like to learn even on vacation, so we take our time and read all the plaques.  For two, we love to listen and watch the tourists around us.  They have provided us with many laughs and topics of discussion over the years.  We still quote the best ones from even 25 years ago.

The most quoted tourist came from a tour of the White House.  We were standing at an exhibit which talked about the assassination of President Kennedy.  The woman behind us, very seriously and very sadly said, "If only he was wearing a helmet."

Apparently, presidents don't need the Secret Service.  All problems would be solved if they simply wore helmets every time they leave the White House.

An example from this vacation would be the woman behind us at the Tower of London.  We were making our way through the crown jewels exhibit and stopped in front of the ordination gown worn by a king hundreds of years ago.  It was made of gorgeous gold material, studded with jewels and stitched with lots of sparkly things.  If Bryan and I would have been talking, we would have completely missed the woman behind us exclaiming, "Well, if that was mine, I'd cut it up and make a whole bunch of scarves!"

I guess that pretty material was just sitting there going to waste.  A much better use of that 400 year old bling would be Christmas scarves for all of the queen's friends.

Another example of tourists amusing us also took place in the Tower of London.  We were up on the wall around the tower, looking down into the courtyard.  There was a full set of armor set up outside the gift shop.  One part of the armor received a whole lot of attention.  I could have stood there all day watching people react to this armor.  Did I mention that when given the opportunity, we also take photos of tourists in order to laugh more later?

No reason we should laugh alone.

Some tourists were mild, simply standing and pointing. 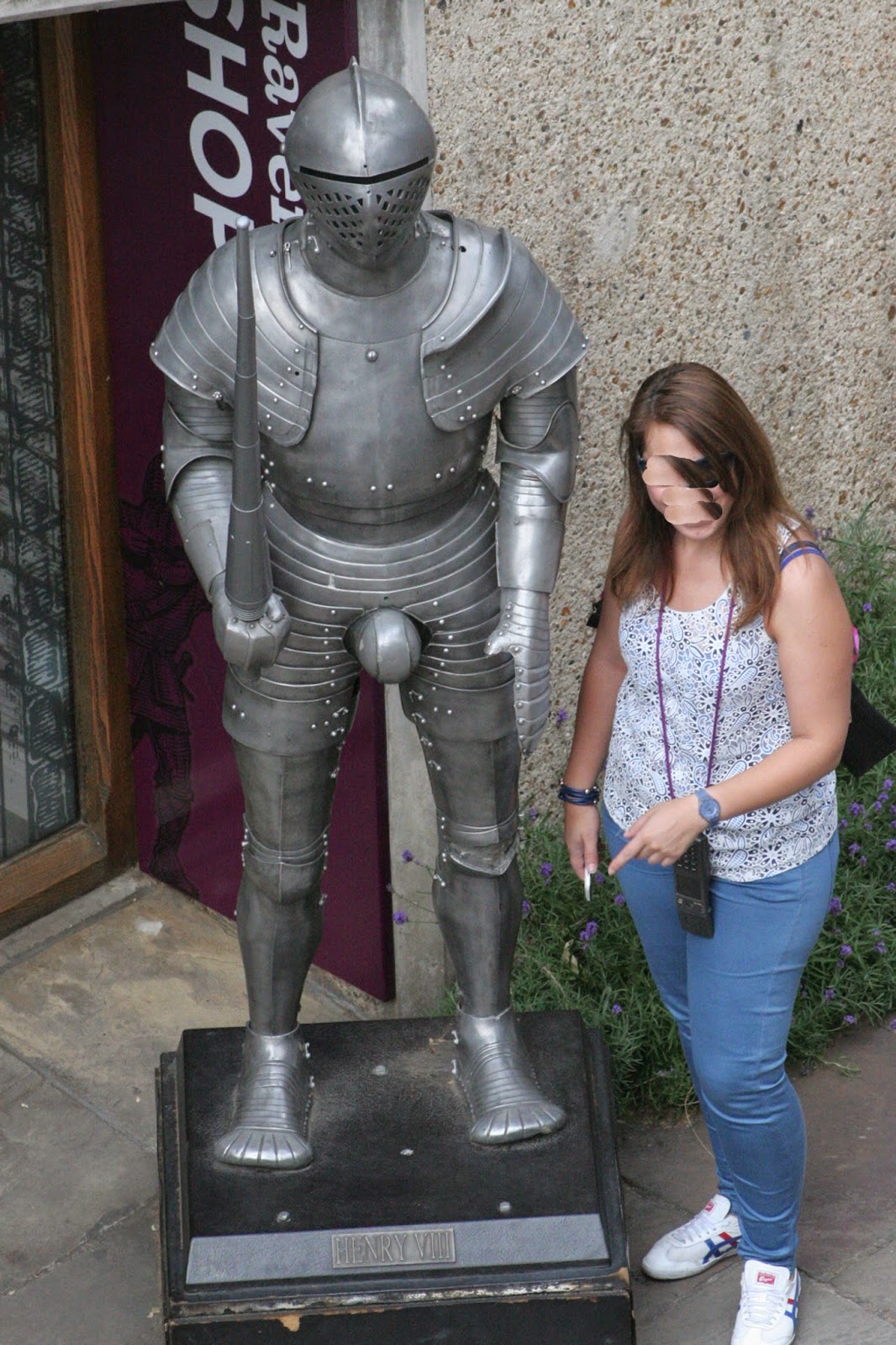 Others were a bit more obvious. 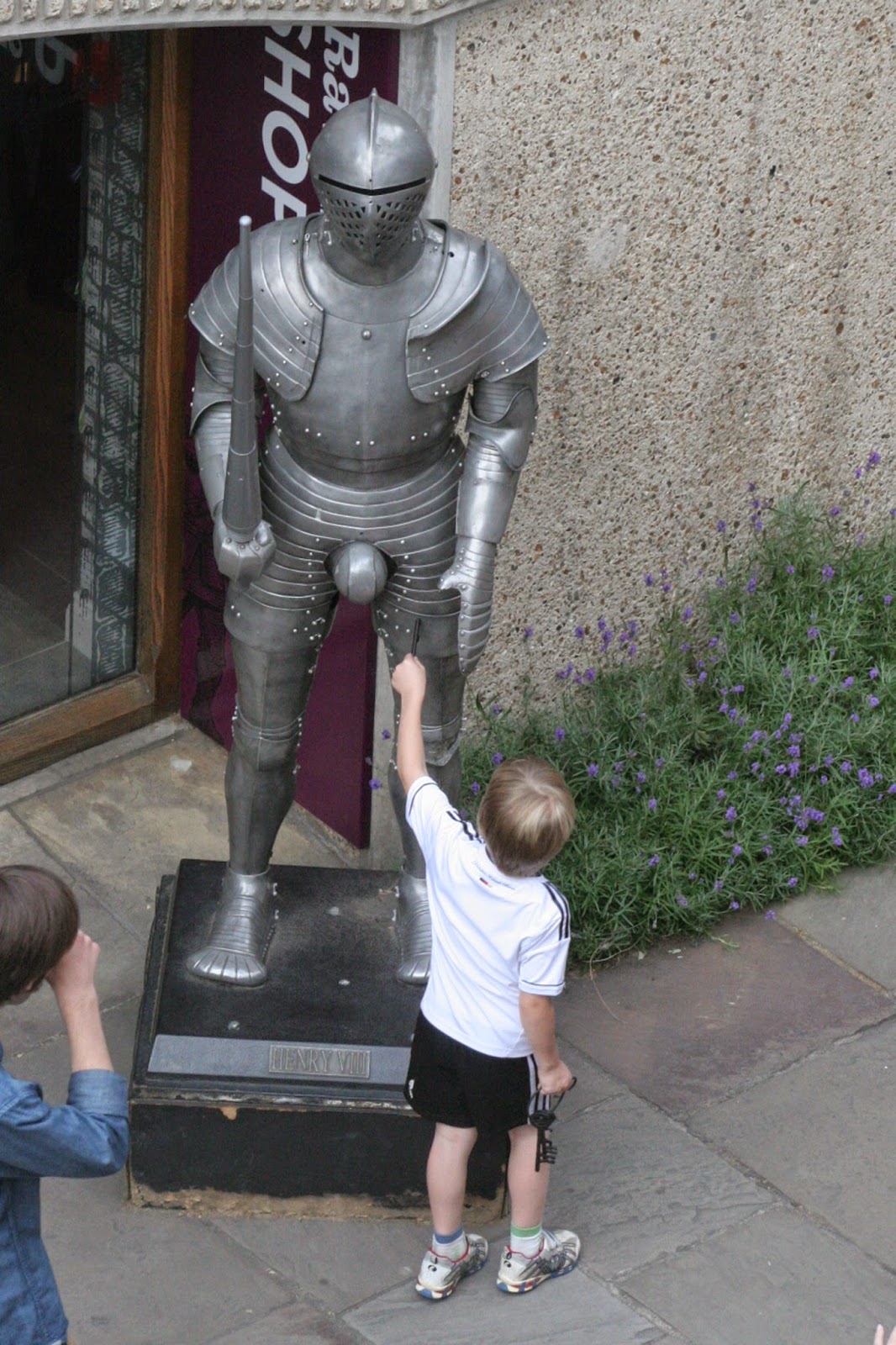 And some were just downright crude. 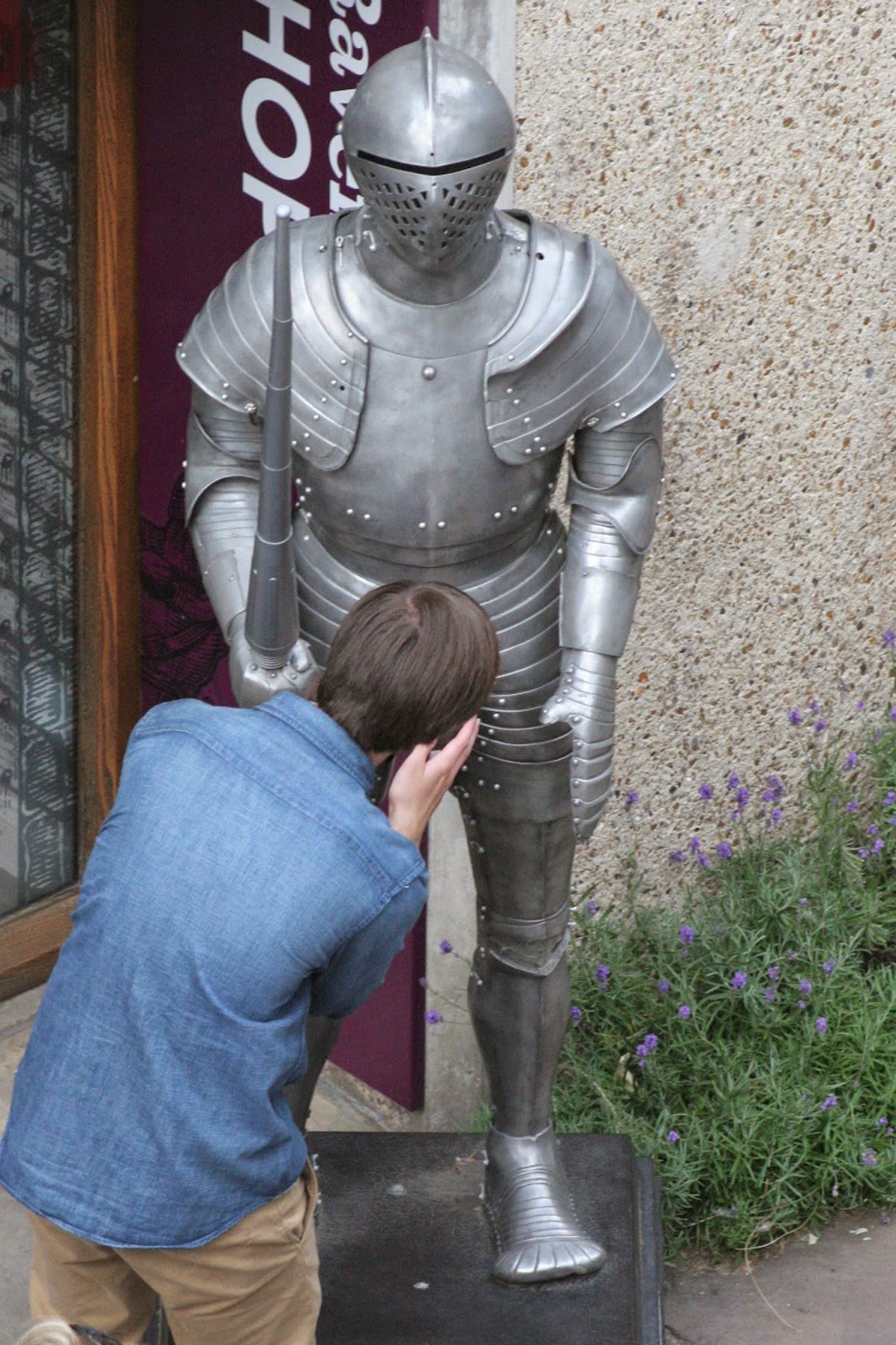 But all reacted, and all made us laugh.

Which is probably why karma bit us in the butt and made us the stupid tourists later that day.

We were standing at a crosswalk waiting to have a closer look at Buckingham Palace.

This intersection to be exact. 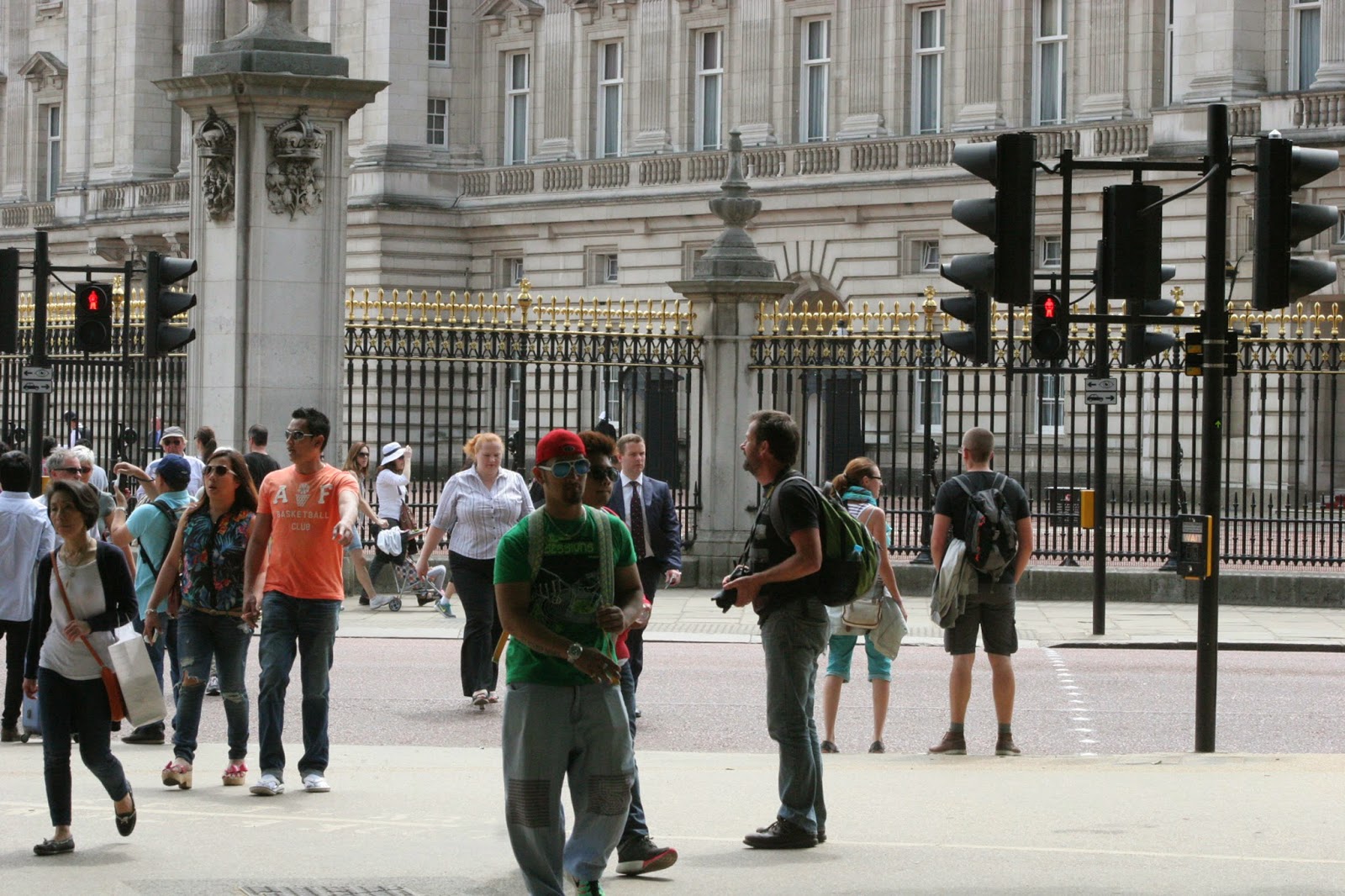 We had just missed the walk light, so we were alone at the curb until three other people came up alongside us.  I immediately could tell one of the three was an Important Person.  He was dressed smartly, carried himself very confidently, and wore a gigantic pinky ring.  The guy most certainly was not a tourist.  Also, I was pretty sure the other man was a body guard.  There was a woman standing closest to me who was obviously with them.

Bryan said later that he first noticed the man's suit.  Apparently, Bryan has become an expert on expensive suits, and the suit this man was wearing was one of the most expensive he'd ever seen.

The light turned green, and the five of us started across the street.  I could have reached out and held hands with two of them.

Half way across, Bryan started the following 1-minute conversation:

These gates to be exact: 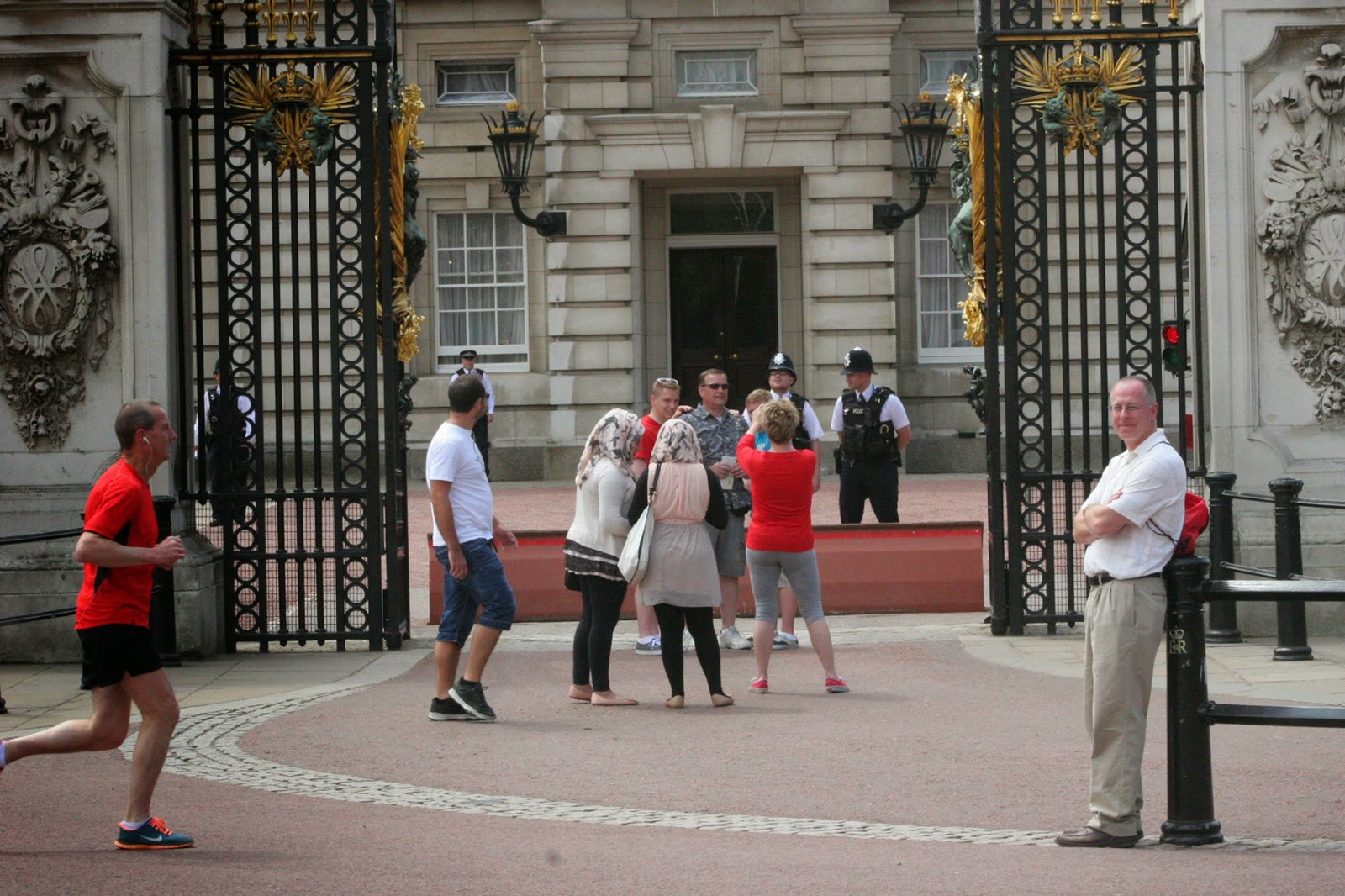 He gave a nod to the guards.

The guards gave a nod to him.

The guy walked right on up to the door and into Buckingham Palace.

Bryan immediately got on his phone and looked up the royal family while I quickly snapped a photo of the guy. 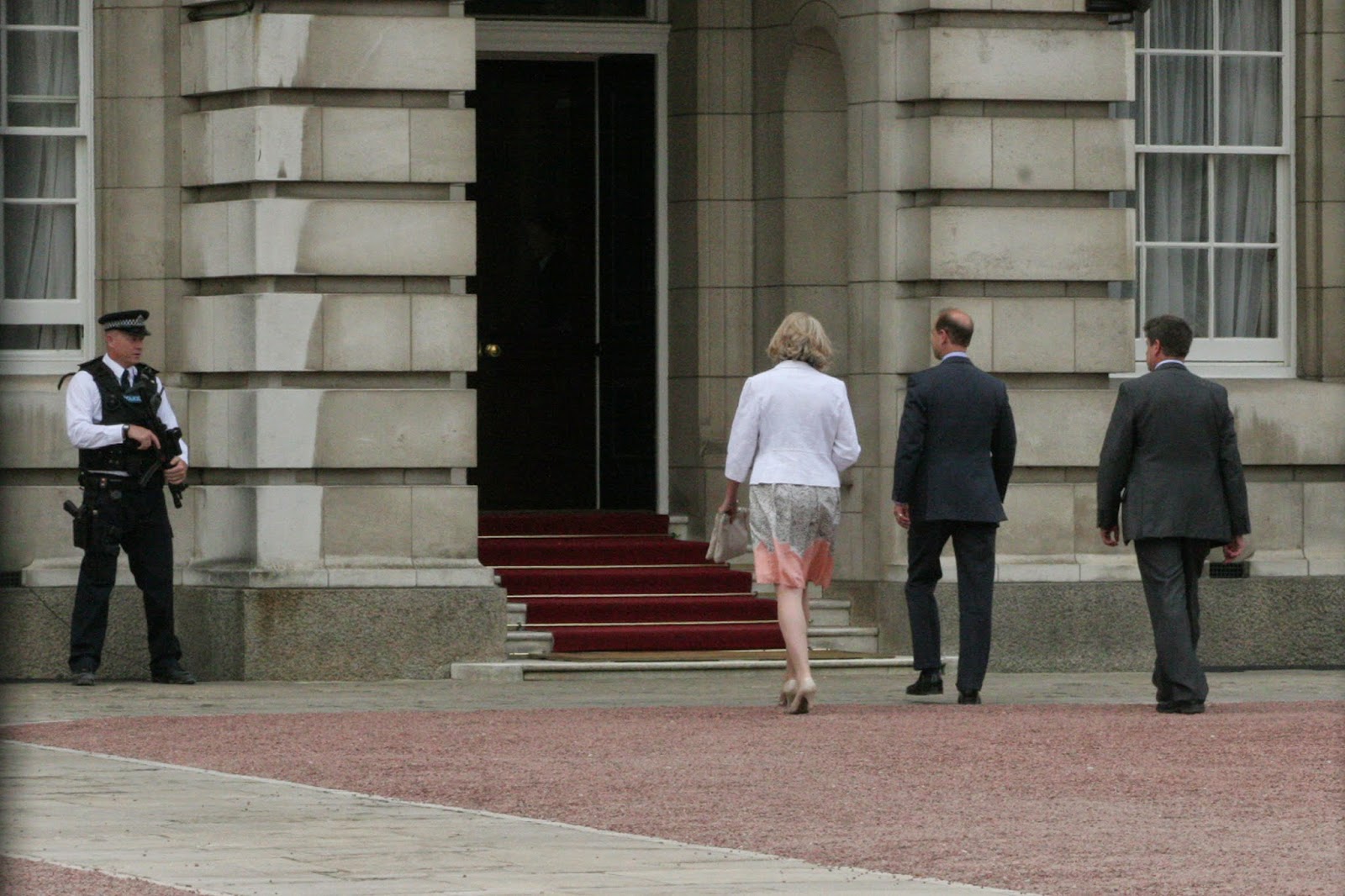 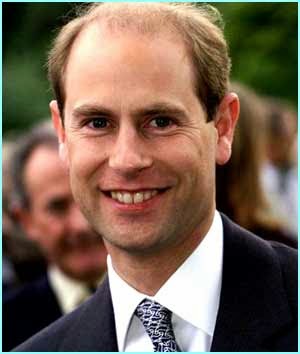 aka Earl of Wessex.

aka NOT Prince William.

Apparently, a prince does just walk home from work sometimes.

And if Bryan wouldn't have been so adamant that it was Prince William, we could have enjoyed our moment of walking this particular prince home.

And Prince Edward wouldn't be in Buckingham Palace muttering about stupid American tourists.

So, have you ever heard a fellow tourist say something that made you shake your head and laugh?  Have you ever been the stupid tourist other tourists are laughing at?