Back when the big kids were the little kids, we would get together with our best friends for a big day of Christmas crafting.  It was always such a fun day.
Since our friends have moved away and the kids have grown, the day of crafting has gone by the wayside.  I have really been missing these kinds of days with the little boys, so I decided to do something about it.  Before I could talk myself out of it, I sent out an e-mail to a bunch of families with preschoolers and toddlers and invited them all over to decorate gingerbread houses.

Craft day started with me getting the table ready for nine kids between the ages of 2 and 4 to decorate houses.   Each of the kids recieved a previously constructed house and a plate of decorations. 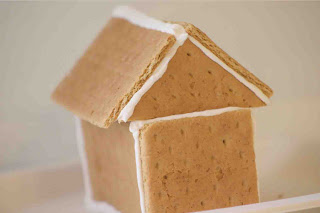 I then made a huge breakfast for my little boys in order to really fill them up and hopefully deter them from eating all of the candy decorations.

The guests arrived, the two year old brought out the mo-jo as party host, and the fun began.

The moms were in charge of putting icing on the houses wherever the kids requested. 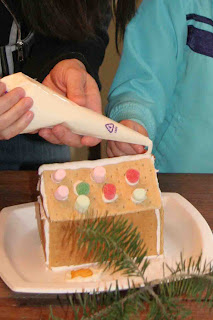 I knew the borderline OCD three year old would get right to work decorating his house in a very orderly fashion.  He wore that hat the entire morning.  Apparantly, you can't have a Christmas party without the party hat. 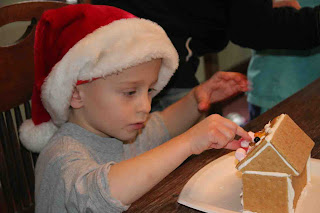 I was pleased to see that my plan had worked, and the two year old was actually decorating his house. 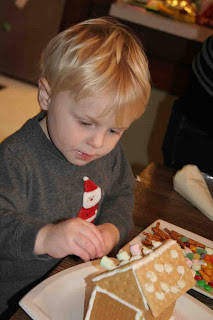 Some of the kids finished their houses, then moved on to decorating the plate, adding walkways and ponds. 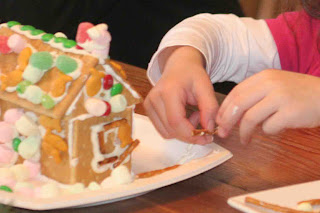 Quick check on the two year old, and I see that he has started eating.  I encouraged him to put the M&M's on his roof, but he gave me an emphatic, "NO!" in reply. 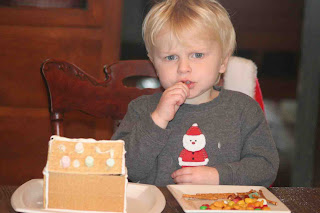 Once he got a taste of the sugar, it was all downhill.  He finished off that entire plate of decorations, then took the few marshmallows off his house and ate those, too.

Then it was time for the frosting. 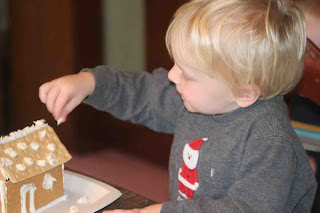 He actually spent 30 minutes scraping the frosting off of the house and licking it off of his finger.  He didn't miss the frosting on the plate either.

As soon as the frosting was gone, and he realized he couldn't scrape off the royal icing, he asked for more candy.  I refused, of course, and offered him some fruit.  In response, he picked up the plate, tilted the house toward his face, and tried to take a bite out of the roof of the house.  The rock-hard royal icing stayed true, but that didn't deter him.  He then examined the house, found the weak spot in the eave of the roof, and tore off some of the cracker.  He ate it with a smile on his face and a, "Take that!" in his eyes.  I tried really hard not to laugh, but it was next to impossible with five other moms rolling on the floor behind me.

It was a wonderful morning for both the children and their moms.  It was a fun, relaxing respite from Christmas run-around.    For me, it was a nice way to create new memories with new friends while remembering the days of long ago. 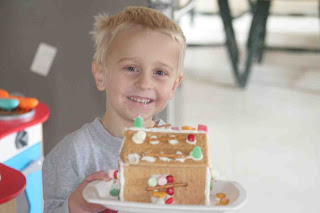 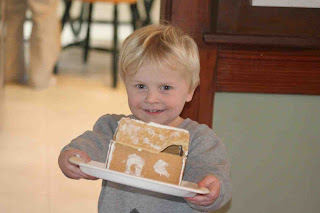 If you would like to have your own gingerbread party, here's what we used:


Tips:
Use a butter knife to score the crackers then break them in order to make squares and triangles.
Use the royal icing to glue the house to the plate to avoid slide-offs.
Parents only use the pastry bags of frosting.
Construct the houses one or two days before decorating in order to let them dry and harden.
Give each child his own plate with a small amount of decorations.  You can always give more to the kids who are actually using it to decorate.
Have healthy snacks available for parents and children.
Have various activities/toys/books on hand for kids who finish earlier than the others.
With such little ones, keep the time short.  Our friends were only here for two hours.
Relax and have fun.  A perfect house made by Mom certainly ain't gonna have the memories that a plain, scraped, ripped apart house made by a two year old will.