I think I've figured out why I haven't been writing much lately, besides the fact I have been busy. I don't have anything funny to say. There's been all sorts of not devastating but not funny stuff happening around us lately. The only posts I have in my brain to write are not funny ones. They are just things I want to get off my chest. It's not nearly as fun to write those sorts of posts, and it certainly isn't any fun to read them. So I don't write. But then I can't get unstuck. So, I sat down and wrote a get-this-off-my chest post today. It's almost ready to publish. I'll post it next week. Then, I'm hoping my funny bone will be released, and I can get back to what I like to write the most. Thanks for hanging in with me.

1. Bryan and I had a nice, relaxing day and a half to ourselves last weekend. I felt bad that the view from our hotel was Bryan's office, but we didn't run into anyone we knew, and if we didn't look out the window, we could forget that we were in downtown Indy.

We went to the Eiteljorg (Museum of Native Americans and Western Art), 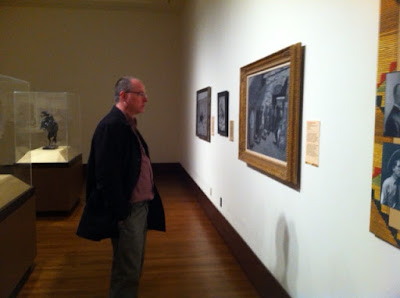 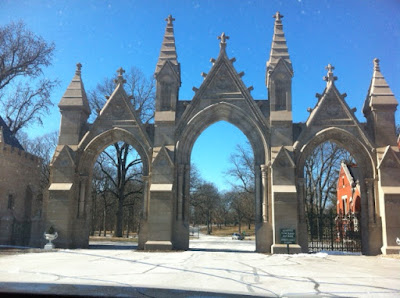 saw the musical Once at Butler University, had a delicious dinner at the boisterous Greek Island, and had a nice time trying out all sorts of wine at Tastings. The next morning we slept in, read the newspaper in bed, and didn't leave the hotel until they made us at checkout time.

All told, a lovely weekend with my darling husband.

2. My mom made it home safely. When she left our house on Sunday, it was snowing. Really, really snowing. We begged her to stay the night, but she had plans with her friends later in the day. Her normally 2 hour drive ended up being a 4 hour nightmare, with slide offs and accidents all the way home. She was fortunate to not be involved in any of the mishaps, especially since one car spun out right in front of her.

3. The volleyball tournament Phoenix was supposed to play in this weekend was cancelled. It was a one-day tournament over three hours away in Illinois (requiring an overnight stay on Saturday). We get to save some money, and now Bryan can come to our school's dinner with me on Saturday night.

4. The weather has been warmer the last couple of days, so the little boys have been able to play outside while waiting for Giant to finish middle school musical practice. The school's playground is getting remodeled and is off limits, which is where the little boys would normally play with a gaggle of other kids. Instead, it was just Turken and Star on the blacktopped parking lot. Thankfully, they are perfectly happy simply kicking a ball back and forth to each other for an hour.

5. Ever since last year's high school volleyball season, everyone has been worried. Only one senior graduated, so there was the potential for a lot of kids to get cut. Thankfully, things worked out so almost all of the kids could stay, including Phoenix. He gets to keep playing, and he's happy.

6. For Lent, one thing I decided to do was attend at least one weekday Mass each week as well as the Lenten Bible study put on by our parish. The day just goes better when you start it with Jesus. As for the Bible study, it is a very interesting video series. I've already learned a lot in the first two weeks.

7. High school track practices have started in earnest, and I actually have a kid running!! Track was my sport in school. From 7th grade through college, the track was my place. Even now, when I smell a rubberized track, I want to break out into a sprint. But except for Star taking a short, one season stint in 4th grade, I haven't been able to enjoy any track meets. No longer! Star decided that freshman year is his chance to give it another try. They pulled him up to run with the upperclassmen at the last practice, and he is having a ball lifting weights and getting as buff as a 5'10", 110 pound kid can get.

8. I tried making something very outside my normal meal making last night using a recipe from the internet. Fish tacos with a cabbage slaw. It went over very well with the family.

9. Phoenix and Buttercup are competing in Mock Trial today. They've had fun preparing over the last many months, and I've had fun watching them become even better friends through the shared experience.

10. A robin flew by my car the other day!! As if that wasn't enough to get my IT'S SPRING excitement going, it is supposed to be 62 degrees and sunny today. Glorious, I tell you. Glorious.

Your turn! Tell me all about your thankfuls!