Like Shootin' Fish in a Barrel, Only We Don't Have a Gun, and It Ain't No Fish

We are in the process of feeding out our fifth round of hogs.  They really are easy animals to raise.  As long as you feed and water them, give them a nice mud puddle on really hot days, and a bit of shelter from the storms, you'll have yourself some good meat by Labor Day.

Usually, that's how it goes.

Sometimes there are a few hiccups.

One month into our second year of raising pigs, I went out to feed them.  One pig didn't come out to meet me at the fence.  I went into the barn to investigate, and to my horror found a dead pig up against the wall.

What does a lady do when she finds a hundred-pound dead pig in the barn, you ask?

OK, so I can't say lady, as no respectable lady would find herself in a situation that has even a remote possibility of coming across a dead pig.

So, what does a woman who became a farmer completely by accident do when she comes across a dead pig in the barn, you ask?

She hollers and runs. Duh.

But, I'm stubborn, and I'm no wimp, so I went back to the barn to put my non-existent vet knowledge to work.

I observed no cuts or marks of any kind to insinuate foul play, and since I don't know how to take a pig's pulse, I poked it.  Then lightly nudged it.   And finally gave it a little kick.

I finally concluded that this pig would not be gracing any one's table come September.

When Hubby came home, we wrapped it in a tarp and drug it to the back field.  Hubby dug what looked like a nice big hole, so we dumped the pig into it.

Funny how a hole looks so much bigger than it really is.

We weren't exactly wanting to see its feet sticking out when we mowed, so we had to haul that blasted pig back out of the hole.  Hubby dug some more, and this time the pig actually fit. 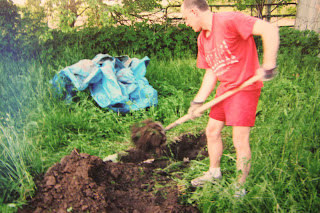 The next year, we made it through the whole summer without incident.  One week before their meeting with the butcher, I once again went out to feed them some breakfast.  Don't worry, I didn't come across a dead pig in the barn.

I came across a 300 pound pig on the OUTSIDE of the fence, wedged in a little ditch against the fence, with a huge chunk out of its backside.

I certainly didn't need to pull out the vet license for this one.

I searched that entire barn and fence, and couldn't find a single place for that pig to have gotten out.  We assume a coyote or two got into the pen somehow, cornered the pig, and in its panic it managed to push the gate open enough to get out.  It then would have had to run to the complete other side of the fencing to get to where it died.

We learned three things from this incident.

1.  We must be seriously sound sleepers that we didn't hear all of this going down.
2.  Our dogs are of no use in a coyote attack.
3.  Vultures are Jewish.

We knew that there was no way Hubby could dig a hole big enough for a 300 pound pig, so we decided to drag it out to the far side of the back field for the vultures.  If an animal gets hit by a car on the road in front of our house, five vultures take care of it within minutes. We figured we'd supply the food for their own Labor Day family reunion.

First, we had to use the mini-van's hitch to get the thing out of the ditch.  We then transferred the chain to the Dixie Chopper for the ride to the back field.

If you have a weak stomach, scroll down real fast to get past the next photo.  It ain't pretty. 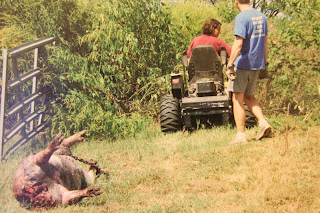 A few days later, a big ol' hunk of pig leg showed up in our front yard.  Our blasted dogs followed the trail and found their hog prize.  Every couple of days, another body part landed at the front of our house.  Not one vulture ever came.

I can only conclude that vultures don't eat pork.  And the only good reason for not eating a delicious pork chop would be a religious reason.  Like being Jewish.

Since then, we haven't had a single pig die.  Well, except for the whole butchering thing, of course.

Last August, we had a bit of a drought.  About a month without rain.  In their search for water, wild birds became a nuisance.  They were all over the dog's water bowl, pooping all over the porch.  And then they started going for the pigs' water.  When the waterer was full, they didn't have a problem.  Once the water level got down a bit, big trouble.  Every single day we would find a dead bird or two floating.  Every day we had to clean out the pig waterer.

We tried covering the waterer with a board, but pigs are way too curious.  They wouldn't leave the thing alone, knocking it over every time.  We aren't welders, so we just dealt with the dead birds.

I don't know if you've heard, but we're having one heck of a drought in Iniana this year.  This means that the birds are back.  Sometimes there are three dead birds in that darn waterer.

Well, apparently this drought has crossed a line.  We haven't had a drop of rain since June 4, and the temperature has been well above normal since before then.  Birds aren't just drowning themselves trying to get a drink.  They seem to be dying mid-flight, as I'm finding dead birds all over the yard.

And now we have creatures of a very different sort.

Today Hubby found this in the pig water: 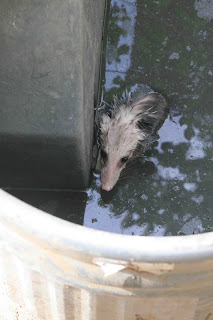 Yeah, an opossum.  This time, it was he who got to pull out the non-existent vet knowledge to find that this opossum was NOT dead.  Just terribly water-logged.

The pigs knew it, as they kept climbing up to see what was going on. 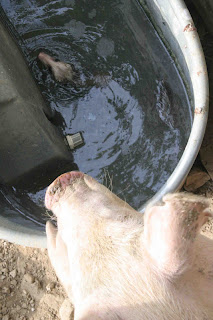 If you look closely, on the bottom right of the waterer, you will see one of the two birds also in there.

So, the next question became, how to get the opossum out of there.  Hubby's first idea was to put more water in the barrel so it couldn't touch bottom.  He figured it would die soon after.  Well, opossums must take swim lessons, because this guy is a really good floater.   When it wasn't dying, Hubby tried to help it along.  He tried to hold it under water with a rake.   Poor guy is too nice.  He couldn't do it.

I suggested he take that rake, get under the opossum, and fling it over his head and out into the yard where the dogs could get it.  The wimp didn't think the risk of the opossum falling on his head was worth it.

Finally, Phoenix showed himself to be the brains of the family.

"Why don't you just fill the waterer all the way so it can climb out on its own?"