I talked to my 86 year old grandma this morning.  I love that woman to pieces.  I grew up a mile from her house, so I was there visiting her and Grandpa at least 3 days a week.  She is a fiesty thing, still living in the same house, even though Grandpa passed away 15 years ago.  In my entire life, she had not spent one day in the hospital until last month.  She was sick with a cold, it turned into bronchitis, then she got dehydrated.  It meant she had to be in the hospital for two weeks, with another week in a hospice for rehab.  It was a smack in the face for most of us, as we've been in denial that Grandma would ever get sick or die.  It's made me think about her more and more, and I've been much better at calling her more and more.  I've had so much fun with her and learned a great deal in all of that time.  I thought I'd share some of the things I learned from Grandma. 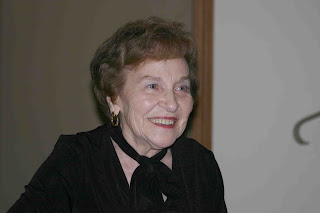 1.  There is a right way to play Euchre.  My family is raised at the foot of a card table.  We can argue better than anyone, but bring out the cards and we're all BFF's, laughing until our sides hurt and we collapse at 1 o'clock in the morning.  That is, unless you play like Inez.  Inez is a woman my grandma used to play Euchre with, and the woman apparantly didn't know how to play well.  If you are Grandma's partner and play in a way that she deems wrong, out will come the Inez reference, and a story to go along with it.  It isn't Inez's fault.  Our family has some very strange "rules".  Some are close to normal, based on some sort of math.  For example, "You never go set on a 9."  If you turn up a nine, you better call that trump.  But other rules are just plain out there.  A favorite is "Sit with the flow of the bathtub in the house in which you are playing."  Apparantly, luck flows with the tub.  Also, "Don't sit between the markers."  Only bad things will come to those who unintentionally sit with score cards on either side of them.  There's a bunch of these odd things.  It's why everyone in my family has a hard time playing Euchre with anyone outside of the family.  So, we've decided to put together a book of rules.  Look for it in a newsstand near you.

2.  Cleanliness can be above Godliness.  My grandma is an over-the-top neat freak.  Clean can't even describe her house.  I would feel comfortable eating off of any surface.  She tells stories about staying up until 2am scrubbing floors when my dad was young.  When my siblings or I host a family gathering, we always have to know if Grandma is coming.  Do we need to clean, or do we need to Grandma clean?  If we just clean, she will clean the entire time she is at our houses.  I have her completely snowed into thinking I'm as compulsive as she is.  She is forever making comments like we are in the same club, and I just go right along with it.  She thinks I clean day and night to give my house a spotless shine.  I am kind of afraid that when she dies and sees how I actually live, she will come and haunt me.

3.  Sweets are for breakfast, lunch, dinner, and any other time you feel like it.  Every grandchild and great-grandchild loves to stay at Grandma's house.  Once you've had your eggs and toast, she brings out the dessert.  Cookies, ice cream, and brownies are all good breakfast treats as far as she is concerned.  My kids love telling the story of their first night at her house.  They ate their eggs, and Grandma asked Giant if he wanted anything else.  He asked if she had strawberries.  She replied, "Well sure.  Do you want strawberry shortcake?"   All four of them looked to me with expressions of "Is this for real, or is Grandma off her rocker?"  They got to enjoy the wonderfulness of spending the night with Grandma.

4.  Life was a lot harder back in the day.  They couldn't afford that new treat called gum, so they chewed tar torn out of the roads.  They would come home from school at lunch time to eat, but also to do a whole bunch of chores before going back to school.  They would help their mother can hundreds of jars of veggies, fruits, and jellies, clean up after it all, then sit by while their mother took complete credit for all of the food lining the shelves.  (Grandma never canned a single jar in her adult life, and almost cried when I told her I started canning our green beans.) Until she married, she had to give her mother all but two dollars from each week's pay to contribute to the household.  When her parents and relatives played cards, all of the kids sat along the wall, silent and observent, unless the adults spoke to them.  I have heard so many stories from when she was growing up.  I love them all.  Even the ones that make me cringe, as she's not the most PC old woman.

5. A person can do anything with the right motivation.  I don't smoke, never have.  But most of my relatives do or have.  Grandma smoked until she turned 75.  She quit cold turkey.  And it wasn't for her health.  It was because the price of a pack went above $4.

6.  You need to get ready for the pearly gates.  For the past few years, my grandma keeps talking about her death.  Her biggest fear is dying alone, and no one finding her for days.  So, she has my dad visiting most days, her siblings calling her most days, and neighbors looking for the drapes to be opened by a certain time each day.   It has now become a joke for the rest of us.  My dad left a message for me when I hadn't called him in a while.  He said, "Well, I guess your step-mom will find me and call you if I die.  Can't gaurantee it, though.  You might want to call me."  Grandma has been trying not to laugh when someone tells a "bad" joke, then reprimanding the joke teller.  She wants us all to remember that she is getting old and trying to get into heaven.  That, and she doesn't want to wet herself.

It is a long drive back to my hometown, but we make that drive at least four times a year.  I want my kids to know Grandma.  I want her to know them.  She has so many things to teach them, and we can deprogram the things they pick up that aren't exactly appropriate for public discussion.  I have to tell them about my mom's mom, as she passed away long before I had kids.  It's just not the same.  Grandma is a person you need to experience first-hand.